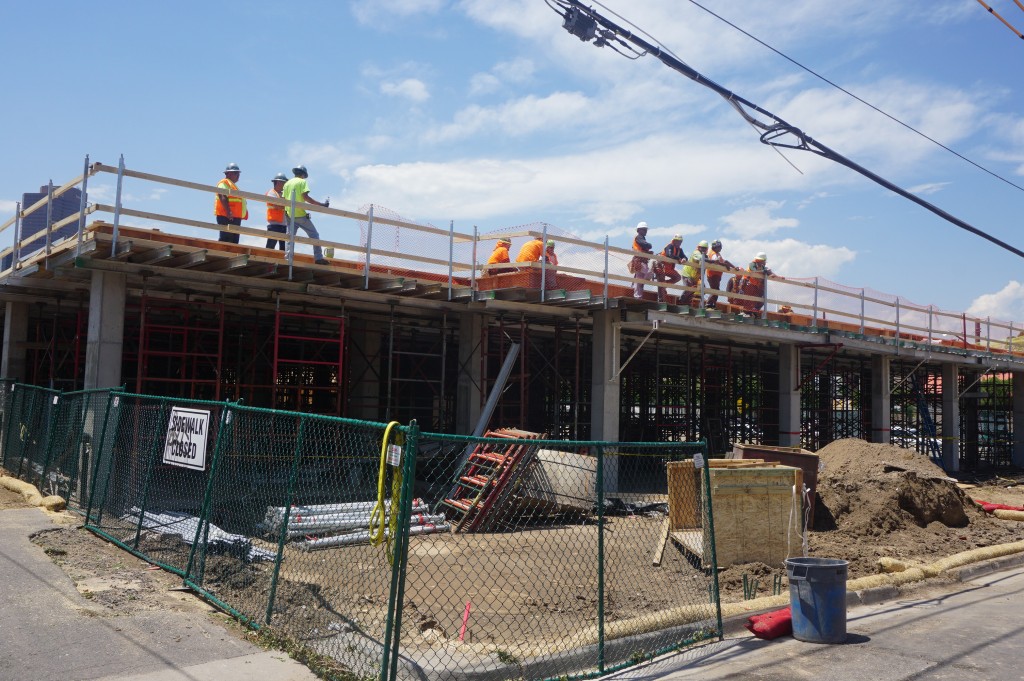 Construction on The Wheatley apartments and townhomes is scheduled to wrap up around next spring. Photos by Burl Rolett.

Welton Street’s first major residential development in a decade is selling out as fast as it’s coming up.

A row of townhomes and a first-story parking garage are taking shape at The Wheatley, a hybrid apartment-townhome project at Welton and 25th streets. Palisade Partners is developing the $21 million site in what president Paul Books called an up-and-coming corridor.

“We look for neighborhoods on the rise, and we believe Welton Street has all the makings,” Books said. “With the neighborhoods around it coming along, it looked like a main street on the verge of getting started.”

The Wheatley will include 82 one- and two-bedroom apartments and 14 townhomes just south of the apartment building. So far, 11 of the three-story townhomes are under contract, Books said, selling for between $400,000 and $450,000.

For 2015, the Colorado Housing and Finance Authority set maximum rents for those tenants at $1,200 for one-bedrooms and $1,440 for two-bedrooms. 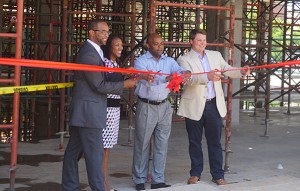 Books did not forecast what the remaining 64 market-rate apartments might rent for but said he planned the project assuming $1.85 per square foot. That would put the smallest units at about $1,020 and the biggest two-bedrooms closer to $2,000.

The Wheatley also includes about 3,800 square feet of retail space Books expects to lease out to a single tenant or a pair of smaller shops. The entire complex is slated for completion in spring 2016.

Craine Architecture designed the complex, Confluence Builders is the general contractor and U.S. Bank financed the project. The Denver Office of Economic Development also pitched in $475,000 to subsidize the affordable housing portion of The Wheatley.

Books settled on The Wheatley name because the development sits on the site of the former Wheatley YWCA, which shut down about 50 years ago. That building was named for Phillis Wheatley, the first black writer to publish a book of poetry in America.

Assuming the project finishes on time, The Wheatley will be the first development to come out of a well-stocked Welton Street pipeline. Century Real Estate Advisors is building 223 apartments a block over at 2300 Welton St., and the Loft Brokers is building nine apartments in the former Melbourne Hostel.

Palisade Partners is also involved in a trio of other Five Points developments, including 2560 Welton, the Rossonian redevelopment at Welton and Washington, and a strip of 26 new townhomes at 2400 Washington St.

Amid rising competition in Five Points, Books said The Wheatley will stand out for its amenities and architecture. The building will have a fitness center and a rooftop patio and features a mostly brick facade designed to blend in on Welton Street.

“The look of the building will be fitting of this neighborhood in its historical context,” Books said.

Construction on The Wheatley apartments and townhomes is scheduled to wrap up around next spring. Photos by Burl Rolett.

A developer's high expectations for the Welton Street area are getting support from homebuyers who are quickly grabbing the project's town houses, which aren't set to be finished until next spring.