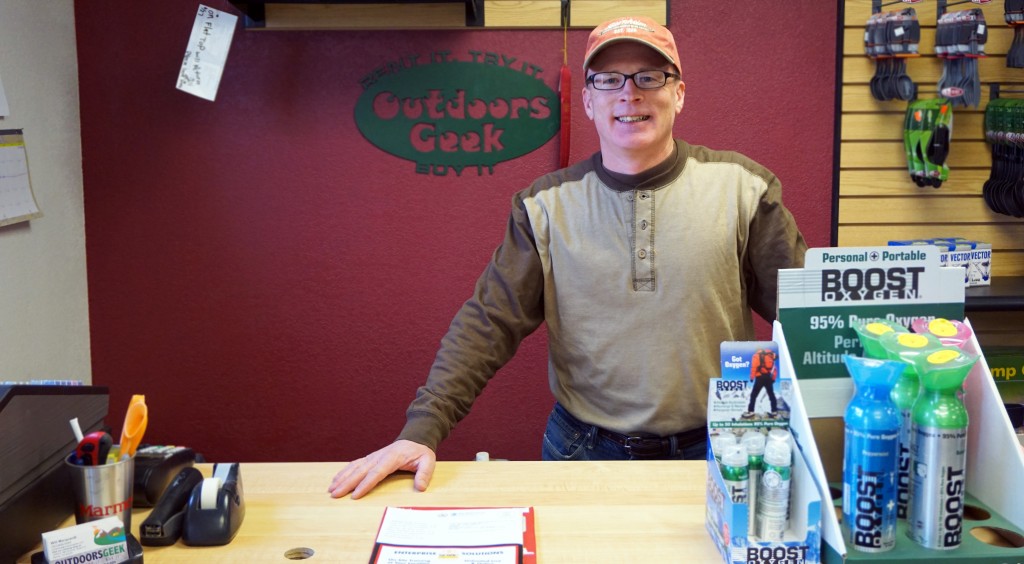 Will Marquardt founded an outdoor gear rental company in 2010. Photos by George Demopoulos.

Will Marquardt had no choice but to make his startup fly.

He had worked in marketing for 21 years when his employers appeared uninvited at his front door one evening to tell him he was out of a job.

“At first I was shocked,” the 48-year-old said. “Then the worry set in. My income was suddenly gone, and I didn’t know how I was going to support my family.”

Instead of seeking employment elsewhere – he said he realized the future of the printing industry was dismal – Marquardt went full-time with Outdoors Geek, a project he’d been working on part-time since May of 2010 that rents camping gear through the mail.

Now the Denver-based startup, with a warehouse packed with tents, sleeping bags, sleeping pads, pillows, backpacks and cook sets abutting Interstate 70 near Peoria Avenue, rents camping equipment all over the U.S. And Marquardt has expanded into cushier forms of camping for music festivals and corporate outings.

The startup first drew customers with the basics for any trip outdoors. Customers choose a package, and Outdoors Geek sends a box with the supplies, including food if necessary. When the trip is finished, they pack the equipment back into the box and send it back to Outdoors Geek – soggy tent, sweaty pack and all.

Outdoors Geek’s basic two-person camping package for one to three days starts at a rental rate of $85. 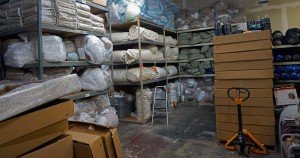 Marquardt, a life-long adventurer originally from Wisconsin, was apprehensive of focusing all of his energy on the project.

“When you go from a six-figure income to supporting your own business, it’s a real leap of faith,” he said.

But what began as a $13,000 investment that Marquardt and his wife, Corina, ran out of their basement has snowballed into a retail location and warehouse containing $1 million worth of camping gear.

“Our camping business has been growing at 50 percent each year. It’s crazy,” he said.

Business has been going so well that Marquardt has signed a lease on a second 2,400-square-foot warehouse adjacent to his 12445 E. 39th Ave. storage and retail space. It brings his total storage space to about 5,000 square feet, up from 900 square feet in 2013.

Much of Outdoors Geek’s growth lies in renting equipment for less rugged outings. Marquardt rents tents for a new niche called glamor camping, or “glamping.” Those tents come with hardwood floors and cots.

The fastest-growing part of the business, Marquardt said, is renting luxury tents for private events and camping packages for music festival attendees.

He recently signed a contract to house between 850 and 1,150 people at an adult camp in upstate New York’s Raquette Lake in August. The contract promises him $86,000 and could net as high as $110,000. He’s also in negotiations to provide housing at the Arise Music Festival in Loveland this summer and the Hulaween Festival in Live Oak, Florida.

“A lot of people who go to music festivals will fly somewhere hundreds of miles from where they live, buy the cheapest tent they can from Walmart, and then leave it at the festival when they leave,” Marquardt said.

“Some of those places look like a tornado went through after the music ends,” Marquardt said. “When someone uses our equipment, they send it back to us when they’re finished. It helps decrease the environmental footprint of music festivals.”

In spite of the exploding popularity of his event business, Marquardt wants to refocus his energies on helping with youth group and family camping trips.

“We’ve hosted 10 groups from Europe this year. That’s the part of the business that I love,” he said. “I’ve been looking for people to run the event business so I can spend time with family camping groups.”

Will Marquardt founded an outdoor gear rental company in 2010. Photos by George Demopoulos.

What began as a $13,000 investment run out of a basement has snowballed into a growing company that's shipping $1 million worth of camping gear across the country.

I have used Outdoor Geek and their recommendations and equipment was perfect for a 3 day float trip.