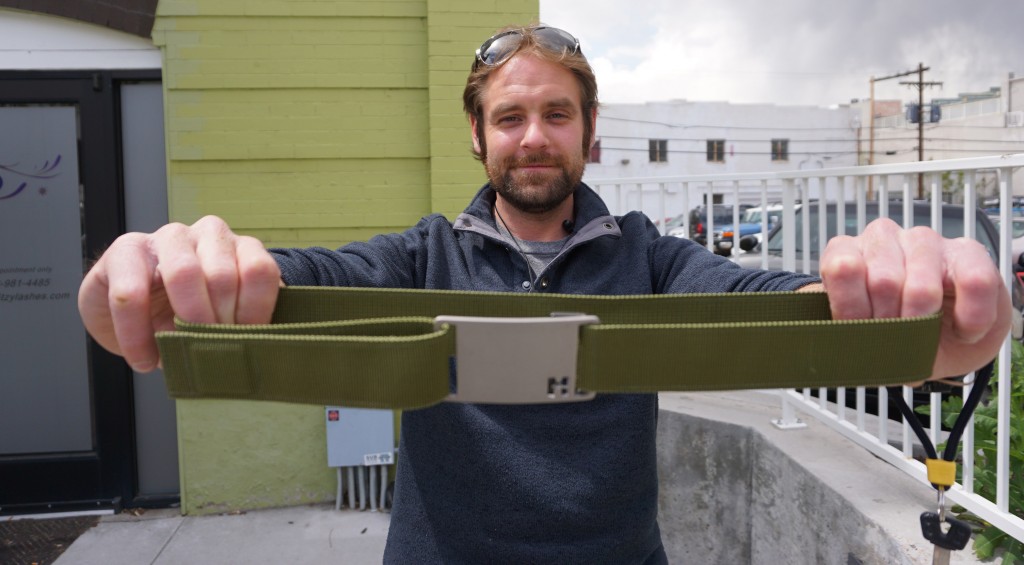 Devin O’Neill is launching a fundraising campaign this week for his magnetic belt startup. Photo by George Demopoulos.

With hopes that a move to Denver will pay off, an entrepreneur has launched a crowdfunding campaign to get his magnetic startup off the ground.

Devin O’Neill is the designer of the Magbelt, a belt made out of military-grade nylon webbing that fastens with magnets in lieu of a traditional buckle. The 60-day Kickstarter campaign, which launches Wednesday, will attempt to raise $9,000 to pay for manufacturing and marketing.

“We want to become the Gore-Tex of straps,” O’Neill said. “It’s very scalable and very simple. We’d like to see our products being incorporated into other brands.”

He’s using Kickstarter as a platform to generate 1,000 presales for the Magbelt, which will sell for $19 each. Once production is up and running, they’ll retail for about $40.

O’Neill has bootstrapped the project so far, investing $10,000 of his savings into developing the Magbelt since its inception in 2013.

The Magbelt has done away with the hanging strap of traditional belts, and the nylon is more durable than a leather alternative.

O’Neill’s target customer demographic includes men between the ages of 28 and 45.

“It’s for professionals that go out to the mountains and are active,” he said. “A lot of the older guys like them, too.”

O’Neill began experimenting with magnetic straps in Michigan in 2013. He was searching for a way to keep his jeans from riding up his boots while on a motorcycle and got the idea to attach the hem to a buckle on his boots using magnets.

The magnets themselves seemed like a good idea, but O’Neill said he realized that boot straps for motorcycle enthusiasts were too niche.

That’s when he got the idea for the belts.

He designed and manufactured the prototype Magbelts himself. He learned to sew from his grandmother in Michigan and made an initial run of two belts: one for him and one for his father.

In November of 2013, O’Neill moved to Denver specifically to launch the Magbelt.

“I had a lot of friends in Denver and knew that there was a very good startup community here,” he said. “There’s a lot of young professionals, and people like the outdoors.”

Now, he splits his time between driving for Lyft and working on his new company.

“This is our startup product,” he said. “It’s going to gain us traction and revenue. After that, we want to innovate the technology.”

Devin O’Neill is launching a fundraising campaign this week for his magnetic belt startup. Photo by George Demopoulos.

With a crowdfunding campaign launching this week, a Denver startup is hoping to take its magnetic belt design mainstream.

Devin has created an amazing product that totally rocks! Devin has found a way take an “old product” like belts and revolutionize how they work! Support the new Magbelts.