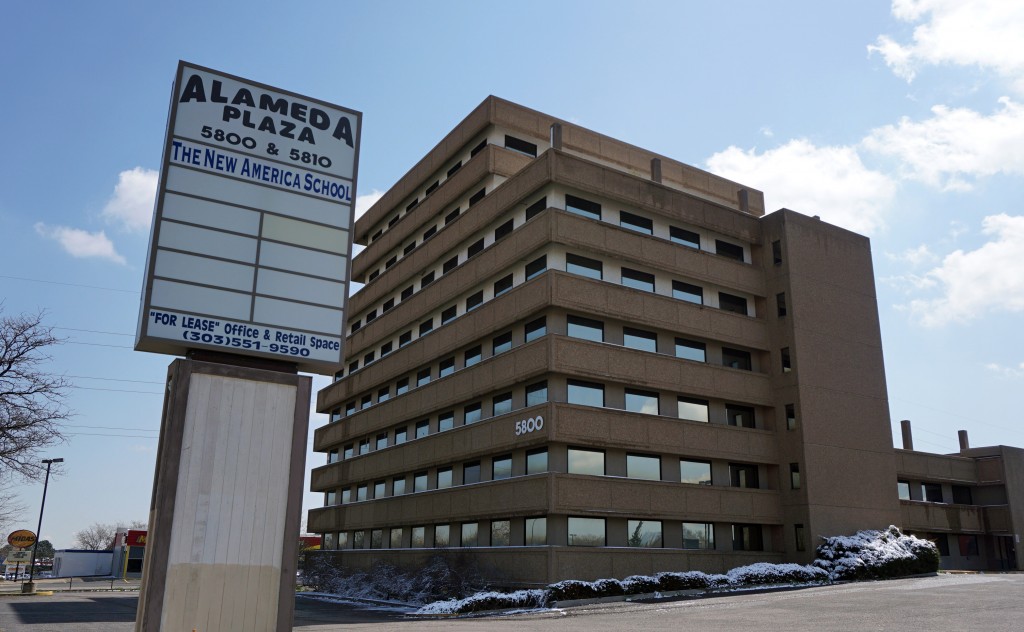 A vacant Alameda Drive office building is set for an apartment conversion. Photos by Burl Rolett.

As one project wraps up in Belmar, a Lakewood developer is scooting east down Alameda Avenue.

Metro West Housing Solutions, a nonprofit Lakewood housing authority, bought an eight-story office building at 5800 W. Alameda Ave. in February with plans to build about 160 apartment units at the site.

“That tower has stood there like an eyesore for decades and has been vacant pretty much the whole time since it was built,” said Brendalee Connors, Metro West’s chief real estate officer. “We took it and thought we can turn this into something that is really a nice asset for the community.”

Metro West paid $3.2 million for the 35-year-old office building and the surrounding 2.75 acres in a deal that closed Feb. 5. Connors said the early plans call for about 55 apartments in the current tower with another 100 or so units in a new construction building Metro West will put up on the same site.

The project will cost about $120,000 per unit, Connors said, which comes to slightly more than $19 million if the development includes exactly 160 apartments.

Red Rock Pointe, as the planned complex is called, will be a mixed-income community with about 70 or 80 percent of the apartments set aside as affordable housing units.

Connors said Metro West would lease the remainder of the units at below market rate, targeting renters that might make about 80 percent of the area’s median income. She said it can often be tough for renters making only slightly more than the affordable housing limits to afford to rent a full-price apartment.

“We’re not trying to necessarily push the max of the market when we mix in our market rate apartments,” she said. “If people’s income is a little over the limit for affordable housing and they don’t qualify, the actual market rate is a huge gap.”

The apartments will be a mix of one-bedrooms ranging from 600 to 700 square feet and 800- to 900-square-foot two-bedroom units. Connors said Metro West will build a few three-bedroom units at about 1,100 square feet.

Metro West hopes to begin construction toward the end of 2016. Between now and then, the agency will need to line up funding through the low-income housing tax credit program, find a tax credit investor to pump in equity and land a bank to finance a construction loan.

Denver’s Sprocket Design-Build is the architect on the project, and Centennial-based JHL Constructors will be the general contractor. Connors said Metro West will start shopping for a bank to finance the deal in early 2016.

Metro West is edging into the Red Rock Pointe project as it wraps up a 130-unit senior living deal at Belmar named CityScape. That project is scheduled to open in fall of this year.
Red Rock Pointe’s location at 5800 W. Alameda Ave. made sense for Metro West, Connors said, in part because it was near other communities the agency manages. And from a perch eight stories above Alameda Avenue, a property manager might be able to see CityScape.

“We climbed all the way to the top and we stood on the roof, and the views were spectacular,” Connors said. “We almost bought it for the views as much as for anything.”

A vacant Alameda Drive office building is set for an apartment conversion. Photos by Burl Rolett.

A Lakewood housing authority is overhauling an empty office building and starting new construction that will bring nearly 160 apartments to Alameda Avenue, with most reserved for low-income tenants.

It’s great to see that this company is making a nice dent in the Denver rental market for affordable housing. For people such as myself who are in the financial gap who can’t afford the rental market that Denver now boasts this has become a really needed option for us, so this company and others like it who develop these properties is really a answerl to the citizens. Thank you.

I would like Brendalee Connors to define “huge gap” in referring to market rate rents. A 2/2 apartment rents for $1,191.00 at Lamar Station Crossing Apts., a MWHS complex. MWHS would do good to give full disclosure of all rents at all their properties. My sister lives at LSC. Her rent went up more than 25% since moving there in 1/2014. She now makes monthly choices to either buy food or medicine.