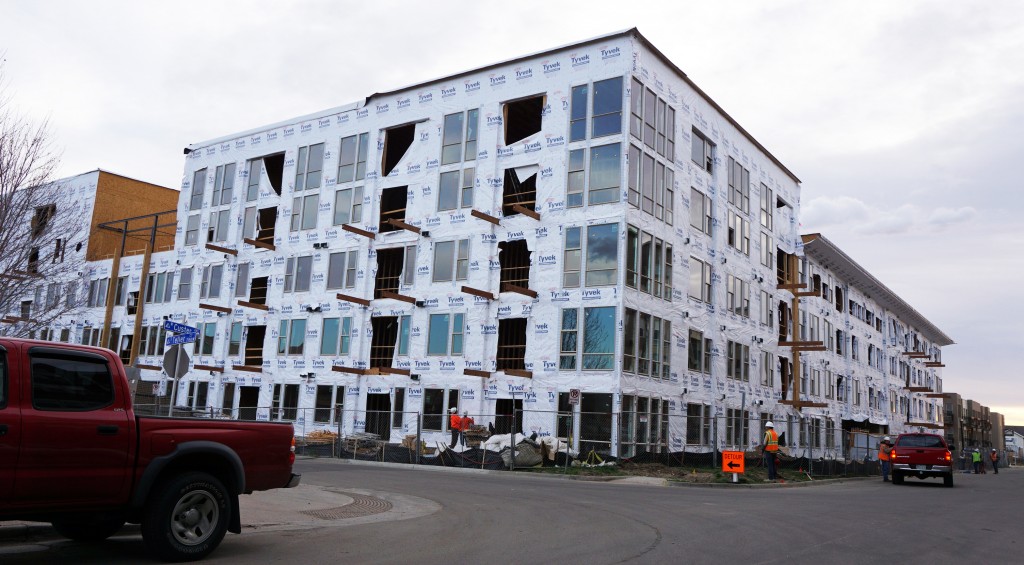 The first of five Trifecta buildings will be ready for residents this summer. Photos by Burl Rolett.

It’s going to be a hot summer for residential development at Belmar.

The first tenants will move into the 220-unit Trifecta Belmar, a $45 million apartment complex by Holland Development. It’s one of three residential projects currently underway at Belmar, the 10-year-old, 100-acre master-planned development in Lakewood that will also see its first hotel open early next year.

“Trifecta will appeal to anyone who wants to live an urban lifestyle without being downtown,” said Elli Lobach, a Holland Development manager. “You don’t have the traffic and congestion problems, but you are able to get places easily.”

Holland got a certificate of occupancy this week on the first of Trifecta’s five buildings, and move-ins should start by the end of the month. Studios are renting at $1,110, one-bedrooms run between about $1,350 and $1,600 and two-bedrooms are listed between $1,800 and $2,000. 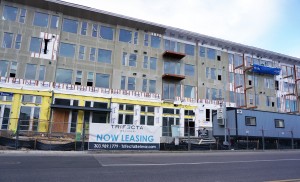 The Trifecta complex will comprise 220 units when it’s finished.

The entire 220-apartment complex should be finished by late fall or early winter, Lobach said. And around that time, Trifecta might well be joined by a few other new residential developments at Belmar.

Belmar first boomed with major residential projects about seven years ago, highlighted by a 308-unit Trammell Crow-developed apartment complex and a cluster of 132 row homes by McStain Neighborhoods.

And more for-sale homes are headed to the area, as well. Last year, David Weekley Homes sold six new townhomes along West Alaska Drive for between $403,000 and $439,000. Now Weekley is beginning work on a site at West Virginia Avenue slated for 22 more town houses.

Weekley also has a third townhome site that has been cleared but is not currently under construction just west of its finished West Alaska homes. That plot will hold another nine homes, bringing Weekley’s total construction at Belmar to 37 town houses.

Belmar came to life in 2004 at the site of the former Villa Italia Shopping Center. Since then, the development has added anchor retail stores Whole Foods, Lucky Strike Lanes and Target, as well as 281,000 square feet of office space.

The project also drew major investments from the Southern Ute Growth Fund in 2006, when the company bought a 33 percent stake in the development, and again in 2008 when Southern Ute bought in for 90 percent of the project. 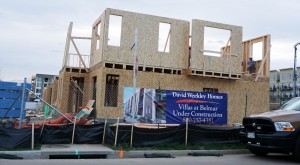 Belmar Marketing Director Christina Brickley said more retail and office development has driven demand from residents that might have been shy to move in when Belmar first launched.

“As a future resident, whether buying or renting, you want to make sure that community is going to respond to its promise in the market,” Brickley said. “I don’t know if I’d want to buy a house in a brand-new area if I didn’t know the infrastructure was there, as far as the grocery store, and the live music and the art galleries and all of the things they’ve promised.”

The next major project in line for Belmar is a six-story Hyatt House hotel being built by Belmar’s original developer, Continuum Partners. The six-story 135-room hotel – Belmar’s first – is scheduled to open in the first few months of 2016.

With 281,000 square feet of fully leased office space and more residents slated to move into Belmar, Brickley said the time was right for a hotel.

“Qdoba just moved its corporate office here, we have Integer here, which is one of Colorado’s largest ad agencies with a lot of national and international business,” she said. “And as apartments, lofts and condos don’t have a lot of guest rooms, the numbers started to work and the demand was there.”

The first of five Trifecta buildings will be ready for residents this summer. Photos by Burl Rolett.

The 10-year old Belmar project is set for a residential development trifecta: a $45 million apartment complex, a senior living community and a for-sale townhome project. And the area's first hotel on the horizon.