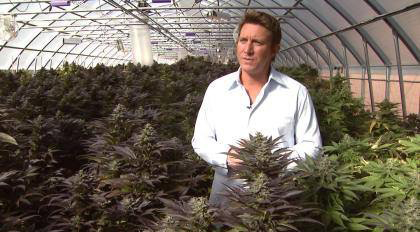 A pioneer of Colorado’s medical marijuana industry is leaving the state for greener pastures – in New York.

He plans on opening four medical marijuana clinics and two marijuana farms there.

“I got tired of looking in the paper and seeing ads for joints,” Stanley said. “You see companies getting in on the ‘Green Rush’ … They’re peddling dope.”

Stanley said he wants to focus on cannabis-based pharmaceuticals.

“It’s become clear that the intention in New York is focused solely on medical,” he said. “One of the things in the bill is no smoking raw flowers, so it’s just concentrates.”

That’s a stark contrast to the Colorado marijuana industry, where 148,000 pounds of marijuana buds that are used for smoking were sold in 2014, according to a report released by Colorado’s Marijuana Enforcement Division.

“We’re identifying compounds that will stop epilepsy, compounds that stop cancer and stop the progression of autoimmune diseases,” he said. “We’re not just making an industry, we’re making standardized medicine.”

Stanley is focusing on creating ways to administer cannabis that doctors will find familiar. He’s researching how to design cannabis-based pills, topical solutions for joint pain and eczema and nebulizers for seizures and Parkinson’s disease.

“We’re not talking about brownies or lollipops anymore,” he said. “We’re adults now, and those are like Flintstone vitamins.”

Stanley plans to open four medical clinics across New York state. And he said he hopes to plant two 1,000-acre farms to supply his operation. One of the farms will focus on a marijuana growing operation, and the other will be geared toward research and development.

The four clinics and two farms will cost upwards of $10 million, Stanley said. Because marijuana operations are still federally illegal, he can’t seek any loans from banks. The entire project is being funded by private investors.

Stanley’s local Peace in Medicine operation on 38th Avenue shut down over the summer and was replaced by a new dispensary.

Stanley hasn’t signed a lease on any of his clinics or farms yet. He has about 15 locations in mind and plans on narrowing those locations down in the next month.

There are three factors that Stanley considers when assessing possible clinic and farm locations: ease of access for patients, proximity to research institutions and the state of local economies.

The clinics and farms will bring about 200 new jobs to New York, Stanley estimates.

“I want to hire a lot of veterans,” he said. “These kids come back and their only training is battle. There’s not a lot of opportunity for them.”

Stanley hopes to be licensed to grow by July. Once he’s licensed, he can begin growing plants immediately.

“There’s a large number of children right now who have epilepsy and no access to medication,” he said. “We have a plan to get plants in the ground and meds to them sometime in late October.”

Stanley has an extensive resume in the pot industry. He founded Colorado’s first medical marijuana lobby, the Medical Marijuana Industry Group. He helped draft two bills on pot regulation alongside then-governor Bill Ritter. He and his brothers also created the “Charlotte’s Web” strain, which was featured in a CNN documentary in 2013. The strain has been used to treat severe epilepsy in children.

“I’m a firm believer that we’re looking at a new biotechnological industry,” he said “I think that New York has the potential to be the epicenter of that.”

Stanley spends much of his time advocating medical marijuana outside of the U.S. He’s currently working with the governments of Jamaica, Poland and the Czech Republic to help develop medical marijuana regulation plans.

Although he’s moving his business out of Colorado, Stanley said that he’ll remain a resident.

“I still live in Colorado, in Evergreen. I try to come back as often as I can,” he said. “But most of the time I spend in the air.”

A force behind medical marijuana legalization and a Denver medical dispensary is moving his business to New York and plans to start up a $10 million clinic and farm project there.

The Stanley’s stole, not made, the strain now called “Charlotte’s Web.” There are numerous other strains which have similar or better CBD:THC ratios. CBD is only one of numerous compounds found in cannabis which have enormous potential as medicine.

Move to New York? Why?? Colorado is the fore front of medical science in the Cannabis Industry next to California. New York is strictly money. What are the real motives for the move?

I wish this was available in ms so my daughter who is literally dying from seizures could actually have a fighting chance:(

The Stanley family has been wonderful, and I am certainly grateful for all they have been able to accomplish in the medical industry, as well as am very proud of their intentions to hire AMERICAN VETERANS …rude, slanderous remarks are extremely childish, M.Wolf Segal.

I wish Mr Stanley well as he prepares to help bring the healing plant to so many sick and suffering.
One thing that must be remembered …. it is not about keeping people on waiting lists or charging ridiculous prices for extracts that cost pennies to produce.
The emerging Cannabis economy must not be purely driven by profit but by compassion for those who are sick and suffering and all must have treatment available regardless of their income streams…..

Very easy solution! MOVE to a legal state. This is not rocket science

Thanks to all the Stanley family. For their courage, vision and compassion. You helped me stay out of pain, I will always be grateful. All my best wishes.

I’m a bit confused as to why you would want to relocated to NY vs CO. As someone else mentioned, we are the epicenter of the cannabis revolution.

I’ve read the NY law and find it really restrictive, so again I’m curious for the move.

Also, from just reading this article, it seems as though he wants to rub elbows with pharmaceutical companies.

“Stanley said he wants to focus on cannabis-based pharmaceuticals.”

While, yes, I understand he wants to make this main stream…but when has the big pharma helped us in alternative care???

Why do we, New York people need this carpet-bagger? We don’t need millionaires to grow and distribute cannabis. I am not in this movement so some bougies can monopolize and profiteer off of cannabis at the expense of the health and safety of everyone else. He would be wise not to come to New York.

Let’s make it difficult for these exploiters to monopolize marijuana. Make it possible for small businesses to take advantage of this new market, and NO regulation and NO taxation for homegrown! If this guy comes to NY, let’s make it so he will want to go back to Colorado.

Being one of the advocates who successfully got the Compassionate Care Act signed into law last June 2014….I truly don’t care who grows the plants. But, I am grateful that Josh Stanley is willing to bring his wealth of knowledge to our state. If he can get the product on shelves, and do it right and any faster than someone else…..GO FOR IT. We lost children from our advocacy last year and we don’t intend to lose anymore because of that popr excuse of a Governor. Anyone with experience, bring it with you!!’