A downtown bowling alley is slated to be converted into a grocery store. Photo by Burl Rolett.

A Colorado grocer is supplementing its Denver footprint with two new projects at the sites of a longtime Denver bowling alley and a shuttered Glendale diner.

“We will be redeveloping that property for a retail use for a single tenant,” President Mark McPherson said. “It won’t look really anything like it does today. We’re going to try and keep the cool elements, and there are parts of it we’ll make a little more open, a little more inviting.”

McPherson said work is scheduled to begin on the building this spring, and he anticipates the grocery store will be moving in between September and October.

“We worked with Elitch Lanes in essence to wait until they get through their prime season, which is the winter,” McPherson said. “Once they wrap up, we will start construction at the very end of May.”

Elitch Lanes announced earlier this year that it would close after 63 years on Tennyson Street. The bowling alley’s owner Cal Eichinger is taking over management duties at Western Bowl in Arvada and will move the Elitch Lanes concept – name and all – to the Arvada bowling alley in May. 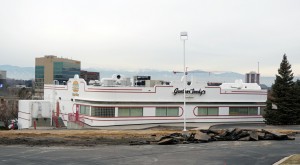 Natural Grocer is eying the former Gunther Toody’s restaurant for a relocation.

And Natural Grocers is working on another new store across town from Tennyson Street. The publicly traded company is planning to relocate its store at 5231 Leetsdale Drive to the former Gunther Toody’s restaurant at 4500 E. Alameda Ave. in Glendale.

The grocer received site development plan approval in January for the former restaurant property, according to Glendale City Council minutes. David Mondavi, store manager at the Natural Grocers on Leetsdale Drive, said Oct. 15 is the planned opening date for the Alameda Avenue location.

Hall did not respond to an email seeking comment on the company’s store on Leetsdale Drive.

Natural Grocers plans to open 18 new stores in its 2015 fiscal year that runs from October 2014 to September 2015, according to its website. The Lakewood-based company had 91 stores in 15 states, including 33 in Colorado, as of last December and reported $520 million in sales for the 2014 fiscal year.

A downtown bowling alley is slated to be converted into a grocery store. Photo by Burl Rolett.

A Colorado grocer is supplementing its Denver footprint with two new projects at the sites of a Tennyson Street bowling alley and a shuttered Glendale diner.

Vitamin Cottage has always been a terrific store including generally very cost-effective compared to it’s competitors particularly vitamins often priced 20% below others.

Very sorry to see Elitch Lanes go away however VC will be an awesome addition to Northwest Denver for everyone!

Thank you for making Northwest Denver an even greater place to live, VC!