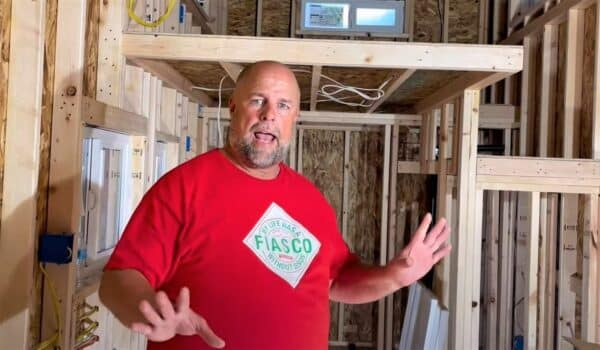 Matt Sowash stands inside a 24-foot house that was built by his Englewood nonprofit Holy Ground Tiny Homes.

The CEO of a bankrupt nonprofit in Englewood that builds tiny homes faced pointed questions Tuesday from some of the 180 customers owed a combined $5.7 million.

Holy Ground Tiny Homes filed for bankruptcy Oct. 7 in the face of lawsuits, an eviction and revelations that it has left customers waiting years for homes it promised to deliver in months, as first reported by BusinessDen.

As part of Holy Ground’s Chapter 11 bankruptcy proceedings, customers that are owed money were allowed to ask questions of CEO Matt Sowash — a covicted frauster — by phone for several hours Tuesday afternoon. He answered under oath.

“You collected $5.7 million on homes never delivered. So, where is that money?” asked Steve Snyder, a West Virginia man who is owed $47,000.

Sowash said that all money collected from customers by Holy Ground was spent building the more than 320 homes that it has constructed since 2020. “There is a paper trail for every dollar spent, so there will be accountability for that,” he told Snyder.

Eva Shaw, a Texas woman, said she paid in full for a custom house in January 2021 and later learned it had been sold to a different customer. She said the situation “sounds like theft to me” and grew annoyed when Sowash’s attorney answered in place of him.

After Conrardy repeatedly answered questions that Shaw had directed to Sowash, an unidentified customer jumped in to tell Sowash, “Answer the question! I’m getting sick of this. I don’t want to hear from Mr. Attorney. Matt, you need to answer these questions!”

Sowash and Conrardy have until January to craft a plan for reorganizing Holy Ground and repaying its 184 creditors. They said the plan will call for Holy Ground to build two homes a month, which they anticipate will allow for repayment in five years.

“The plan is to pay 100 percent,” Conrardy told Holy Ground’s customers. “If it ends up that the profits are not as strong as the projections, then people might get 90 percent or 80 percent. There’s no guarantee of 100 percent payback. But that’s the objective here.”

A percentage of Holy Ground’s profits will be divided among creditors based on the amount they are owed. The payments will be frequent and small, rather than lump sums, Conrardy said.

“Don’t hold us to this but the plan is to repay everyone in parallel,” he explained.

Sowash was asked about large and small details of his business, including record keeping and the roles of specific workers there. He said all Holy Ground builders are independent contractors who self-report their hours. “There is no clock in, clock out system,” the CEO said.

Sowash explained that he did not provide tax forms to workers until recent months. When asked whether he has verified his contractors are legally allowed to work in the U.S., he paused for 25 seconds before vaguely saying they “are documented to be here one way or another.”

Holy Ground’s customers expressed deep suspicions on the call about the finances of both Sowash and Holy Ground. Several asked whether Sowash has offshore accounts or overseas property that he is funneling money into. Sowash repeatedly said that he does not.

As he often does, Sowash partly blamed media attention and negative online reviews for Holy Ground’s predicament. He again urged unhappy customers to not speak out.

Matt Sowash stands inside a 24-foot house that was built by his Englewood nonprofit Holy Ground Tiny Homes.