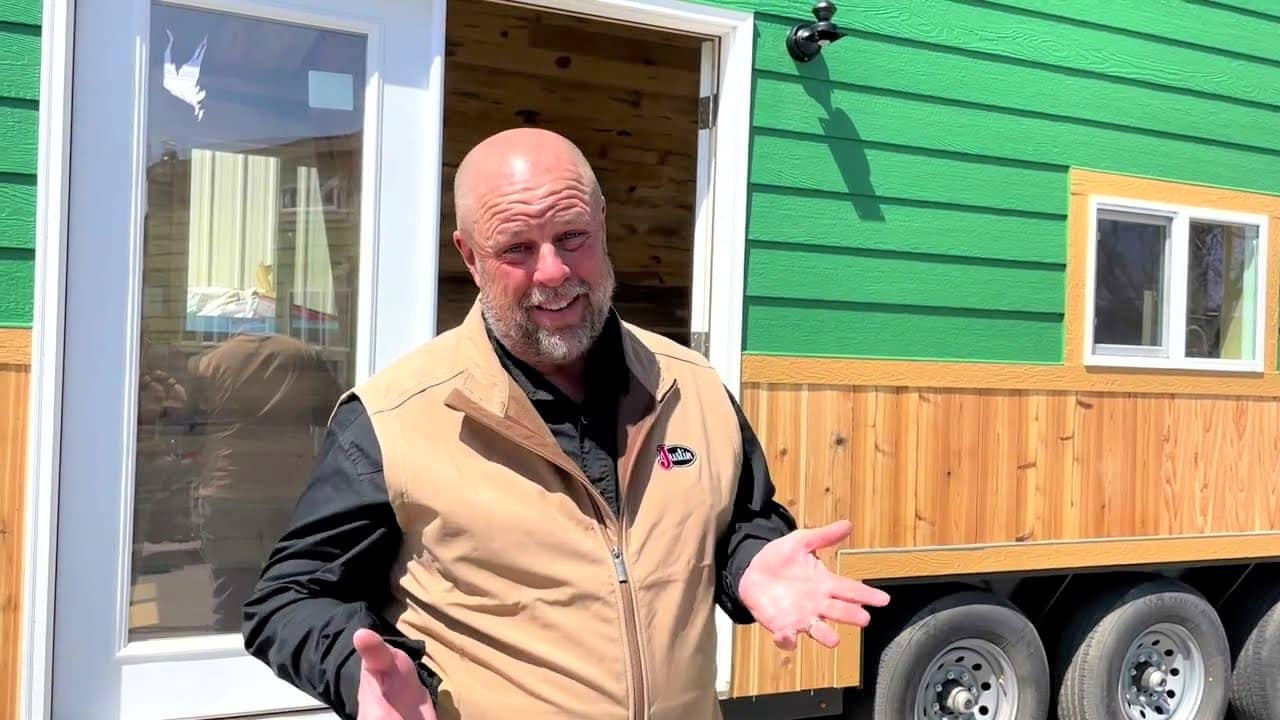 Matt Sowash, founder of Holy Ground Tiny Homes, stands outside a 32-foot home that it built. (Image courtesy of YouTube)

On Friday, Holy Ground Tiny Homes did what it has long warned customers it could do.

The nonprofit home builder in Englewood — damaged reputationally by revelations that it has left customers waiting years for homes it promised to deliver in months, and evicted from its office last month — filed for Chapter 11 bankruptcy late that day.

Holy Ground’s bankruptcy paperwork shows it has between $100,000 and $500,000 in assets but owes between $1 million and $10 million to more than 100 people. A list of its biggest creditors is made up of customers who bought homes they didn’t receive.

As BusinessDen first reported in August, Holy Ground, founded by convicted fraudster Matthew Sowash in 2019, has taken some customers’ life savings and refused refunds. In a letter to those customers Friday, Sowash said bankruptcy will give Holy Ground “breathing space” while it focuses “on restructuring its debt and continuing to operate.”

“In its restructuring, the company will be able to explore alternatives to strengthen it, while addressing the challenges the company has faced and that led to the need for bankruptcy relief,” the CEO wrote. He predicted that Holy Ground’s “current and anticipated cash” will be enough to pay bills and continue operating during its bankruptcy.

Attorneys for Holy Ground also emailed notices to the charity’s many creditors Friday, informing them of the bankruptcy case and telling them that they are now limited in their ability to collect money from Holy Ground while the case is pending.

Through an attorney, Sowash and Holy Ground declined to discuss the bankruptcy Monday.

Sowash has warned for months that Holy Ground could file for bankruptcy and has tried to use the threat of it to dissuade angry customers from speaking out.

“The only thing that can slow us down is if sales fall below a level of success,” Sowash wrote in a June letter to customers. “This can be caused by customers bringing lawsuits against our company, providing bad reviews online and filing complaints with the BBB. If these actions increase and sales fall below a level of needed funds for the company, then we will be forced into protecting the company through bankruptcy.”

A month earlier, Sowash claimed that filing for bankruptcy would allow him to not build houses that customers bought and paid for in 2021. His letter referred to bankruptcy as “Option #1” and said it’s “what the seasoned and wise businessman would do.”

“If the people that have older orders or refunds coming … begin bashing us on social media, giving bad reviews on Google or the BBB, or threatening legal action, then I will be forced into Option #1,” he wrote in the May letter. “That’s not a threat, it’s simply a reality.”

But still, criticisms circulated. Holy Ground’s rating with the Better Business Bureau fell to an F, two lawsuits were filed against the company by customers who paid for a home but never received one, and national news outlets wrote about Holy Ground’s struggles.

The homebuilding company is controlled by a religious charity, Revelations in Christ Ministries, which also filed for bankruptcy Friday. That charity operates a nonprofit auto shop and car racing company.

The charity also runs Mateo’s Sub Shop, which sells tiny homes that can be used as food trucks. On its website, Sowash calls himself Mateo, which is Spanish for Matt. It’s unclear if the sub shop business has sales; Sowash has declined to answer questions about it.

It also remains to be seen what a Chapter 11 bankruptcy will mean for Holy Ground’s customers. Sowash, in his letters to them earlier this year, said he wasn’t filing for bankruptcy because he cared too much about the customers who would lose out if he did.

“Sounds funny that generally caring about people was my biggest mistake,” he wrote in the May letter. “But if I would have simply filed for bankruptcy before the end of 2021, then all of this would have been avoided and we would be better off as a business.”

“The only problem,” he added, “is that you, the customer, would not.”