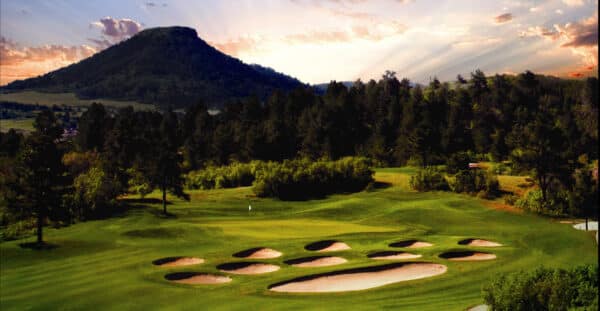 The 6th hole at Bear Dance.

Three public golf courses in the Denver region sold this month to an out-of-town buyer looking to push west.

“We’re excited about buying great assets,” said Heritage CEO Mark Burnett. “Colorado National and Bear Dance are high quality and with Plum Creek we are going to take it up a couple of notches to a similar level.”

Heritage plans a multi-million dollar irrigation upgrade at Plum Creek, among other improvements.

Heritage bought the clubs from Stuart Bruening and his investors.

“I’ve known Stuart for quite a while. He’s a great operator,” said Burnett, who previously worked for golf course operator ClubCorp. Burnett added that Bruening and his son will both be staying on to help run the courses.

Bruening moved from Arizona to Colorado in 1999 to build Bear Dance, which opened in 2001. He bought Plum Creek around 5 years ago and is the general manager of all three clubs.

“It was a tough decision … I did have a lot of heart and soul and thought it would be a family business forever. But it was just time to step back and smell the roses,” said Bruening, 60, adding that the last few years have been great for golf.

“Bear Dance has always been fairly busy. Plum Creek and Colorado National saw a big boom in the pandemic. And it hasn’t slowed down yet. Ever year we think we can’t budget any higher, and then we set a new record.”

The price paid, per deed documents was:

The deal is the second major golf course sale this year. Concert Golf in August bought Hiwan Golf Club in Evergreen for $7 million.