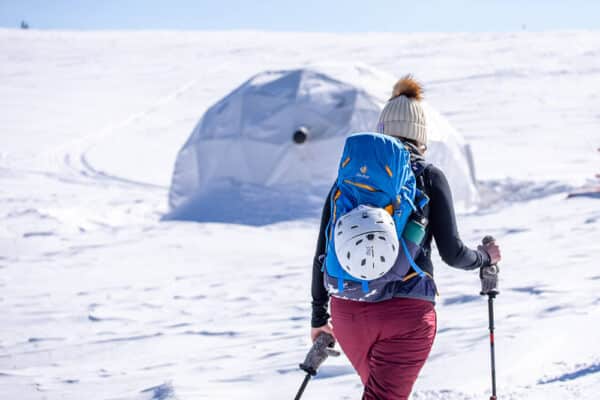 Bluebird Backcountry, a liftless ski mountain near Kremmling, is adding accomodations for its customers. Photos courtesy of Bluebird.

Bluebird Backcountry is betting on lodging to draw more backcountry skiers and splitboarders to its skin tracks and trails for the 2022-2023 season.

The all-backcountry ski area, nestled between Kremmling and Steamboat Springs, is adding simple cabins and geodesic dome huts to its grounds that will be able to accommodate about 40 guests each night.

Offering simple lodging was a move partly based on feedback from Bluebird Backcountry guests who were seeking accommodations closer to the ski area, said Bluebird Backcountry CEO and co-founder Jeff Woodward. The cabins were previously on the property, where they’ve been used for hunting, and Bluebird will construct the temporary domes seasonally.

Previously the nearest lodging was about 25 minutes away from the mountain. The resort’s distance from the Front Range—about 2.5 hours without traffic—has made it challenging to lure skiers without closer accommodations, he said.

“This location is fairly far from the Front Range,” he said. “Lodging and other stuff are the ways that we’re kind of looking to address that.”

Adding basic lodging comes as Bluebird Backcountry enters its third year in business, and Woodward hopes the accommodations boost visits to Bluebird. Last year the resort notched about 5,000 visits, and Woodward wants to see 7,500 this season.

Bluebird’s lodging could make the experience of hut trips more accessible to visitors—including novice backcountry skiers and families with small children. Instead of traveling multiple miles through snow to reach their lodging, Bluebird’s guests won’t have to skin more than 1.1 miles to access their cabins or domes (and some will be adjacent to the parking lot).

“We all love hut trips,” Woodward said. “It’s really wonderful basically to be able to ski all day and then be in this warm cozy place, but that’s also removed from the burdens of the real world, with a bunch of friends and family.” 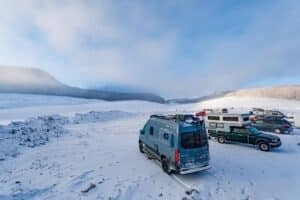 Prices range from $59 per night for a bed in a hostel-style cabin to $229 for an entire geodesic dome that can sleep up to five people. The resort will also continue to allow visitors to car-camp in its parking lot for $25 per night. Woodward did not disclose how much Bluebird was investing to add the lodging.

Bluebird Backcountry opened at the privately owned Peak Ranch in February 2020 after raising $70,000 through a Kickstarter campaign. Since the ski area was established, its operators have added more extreme terrain, gladed trails and improved access roads for maintenance.

Woodward declined to discuss the company’s revenue or whether it was profitable. The company has sought around $2 million from investors, according to SEC filings.

Bluebird is also gaining stature in the ski mountain industry: It joined the Indy Pass this year. The pass encompasses ski resorts in the Northeast, Midwest, and West, as well as a few mountains in Japan and Canada. Sunlight Mountain in Glenwood Springs is the only other Colorado resort on the pass.

“One of the things that we’re trying to do is bring some soul back into skiing,” Woodward said. “A lot of us got into backcountry skiing because we were kind of disillusioned with mega-resorts.… If you’re trying to get out in nature and ski some fun turns and, you know, spend quality time with friends and family and stuff, like a lift line doesn’t help with that.”

For skiers and splitboarders without the Indy Pass, Bluebird Backcountry’s daily passes start at $39, and season passes for the ski area cost around $229 for the 2022-2023 season. 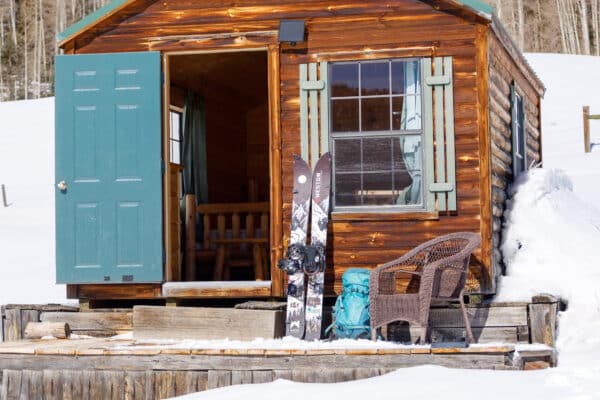 Cabins are also available for rent.

Bluebird Backcountry, a liftless ski mountain near Kremmling, is adding accomodations for its customers. Photos courtesy of Bluebird.

Bluebird co-founder Jeff Woodward said he hopes to reach 7,500 visits this winter, up from 5,000 last season.