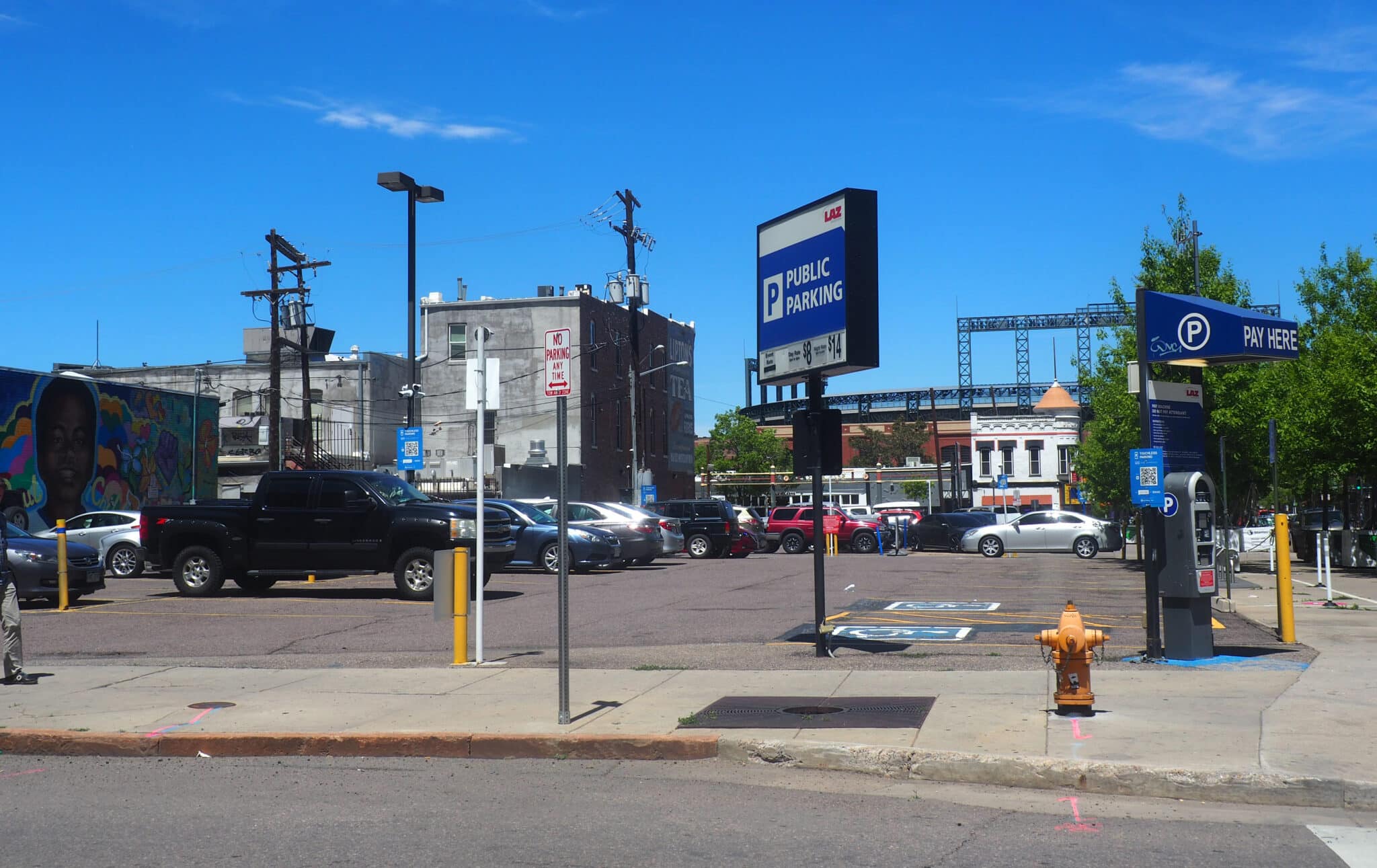 The corner of 21st and Lawrence streets, with Coors Field visible in the background, where a developer has proposed a 37-story residential building. (Thomas Gounley photo)

A Chicago-based residential developer is looking to move into Denver — specifically Arapahoe Square and Ballpark — in a big way.

Additionally, records show the company has spent millions in recent years on properties in the 2200 block of Stout Street.

The sites are within about a half mile of each other.

CMK didn’t respond to multiple requests for comment last week. The firm has developed a number of residential projects in Chicago, according to its website. It does not appear to have previously worked in Denver.

CMK’s development proposal, submitted to the city in mid-May, calls for a 37-story tower with 500 residential units and 350 parking spaces at the corner of 21st and Lawrence streets.

The project would be built on a 0.62-acre site that is currently home to a parking lot and single-story brick buildings. One of the structures is occupied by Mexican restaurant La Popular, known for its tamales.

CMK does not currently own the site. The parking lot is owned by Jay Soneff’s Soneff Family Trust. The buildings are owned by an entity affiliated with the family that owns La Popular. 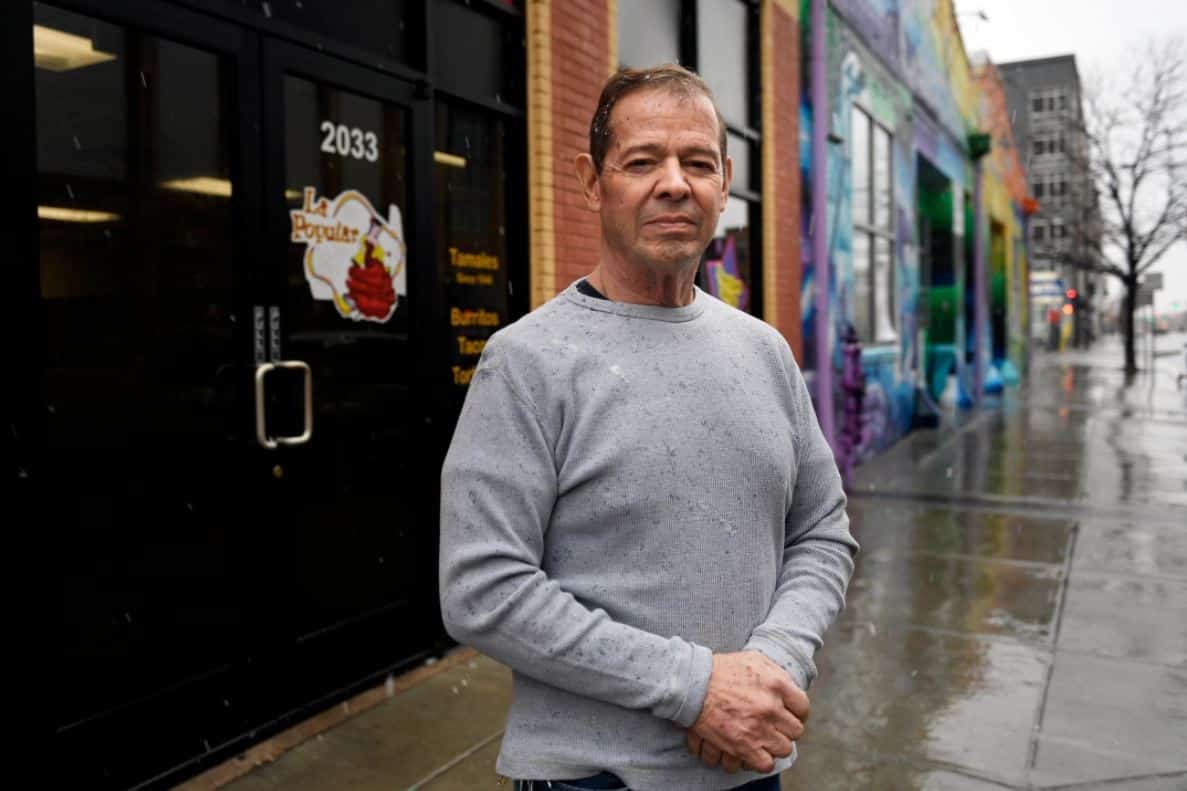 Reached by BusinessDen last week, family member Dan De La Torre confirmed that a developer is seeking to buy La Popular’s property, but urged caution, saying “we’ve had at least three starts like this where nothing happens.”

“Until that check gets signed … we have no deal,” he said.

The ground floor of CMK’s proposed building would feature about 7,300 square feet of retail space, along with leasing and lobby space. Residential units would be on floors two through 36. The 37th floor would feature a pool and other shared amenity space.

Gensler is listed as the architect on the project plans. 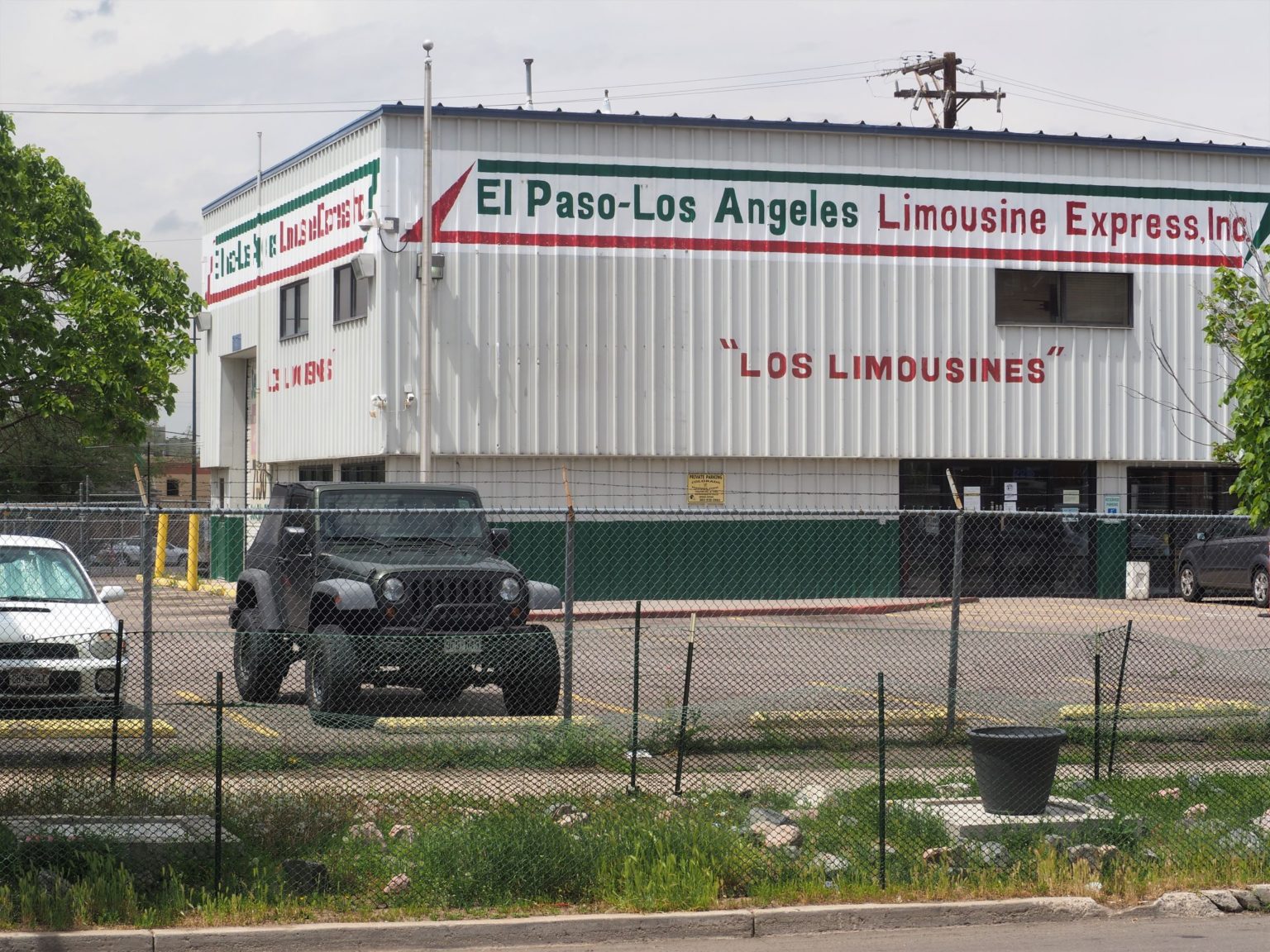 The “Los Limousines” bus station at the corner of 22nd and California streets. (BusinessDen file)

Another development proposal submitted by CMK calls for a 25-story, 646-unit residential building at 2215 and 2243 California St. It would have 396 parking spaces and about 8,500 square feet of retail space.

The project would feature two towers rising above a shared podium.

The 0.75-acre site is home to El Paso-Los Angeles Limousine Express Inc., a bus company whose routes generally serve the southwestern United States and Mexico, according to its website.

The company appears to already own the property. 2215-2243 California Street LLC, which uses an office address affiliated with CMK, paid $8.4 million at the end of December, records show.

The site was previously eyed by a development firm called Scenic Investments, which submitted plans to the city in 2020. 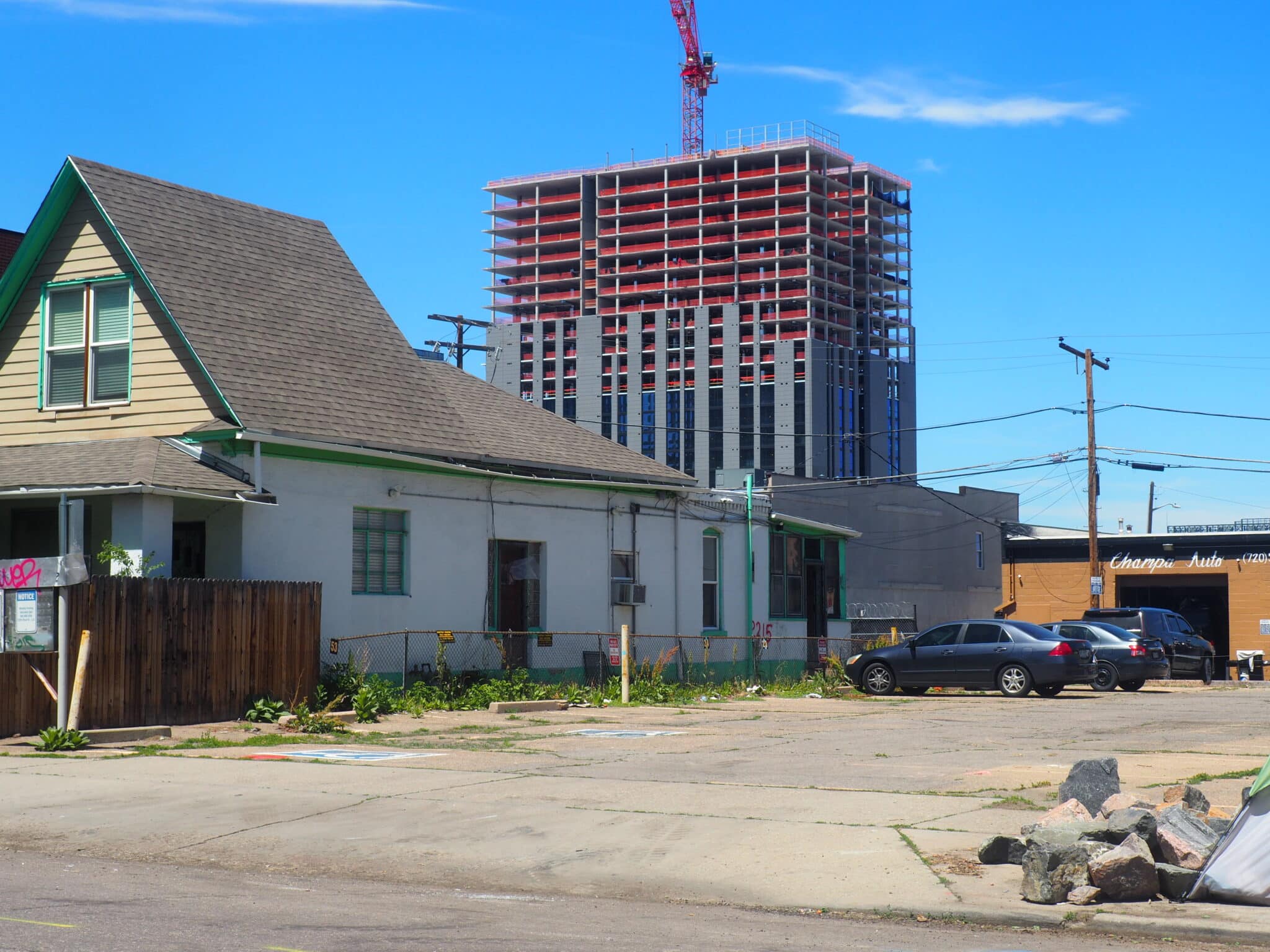 The 2200 block of Stout Street, with the X Denver 2 apartment complex under construction in the background. (Thomas Gounley photo)

CMK appears to have another project brewing in the 2200 block of Stout Street.

An entity affiliated with the company has spent $6.3 million in three deals since late December for about 0.56 acres on the odd-numbered side of the block, records show.

No development plans have been submitted for the site. And there is likely at least one more deal to come, because three parcels in the middle of CMK’s assemblage are still under separate ownership, records show.

That side of the block is generally home to one- and two-story structures. 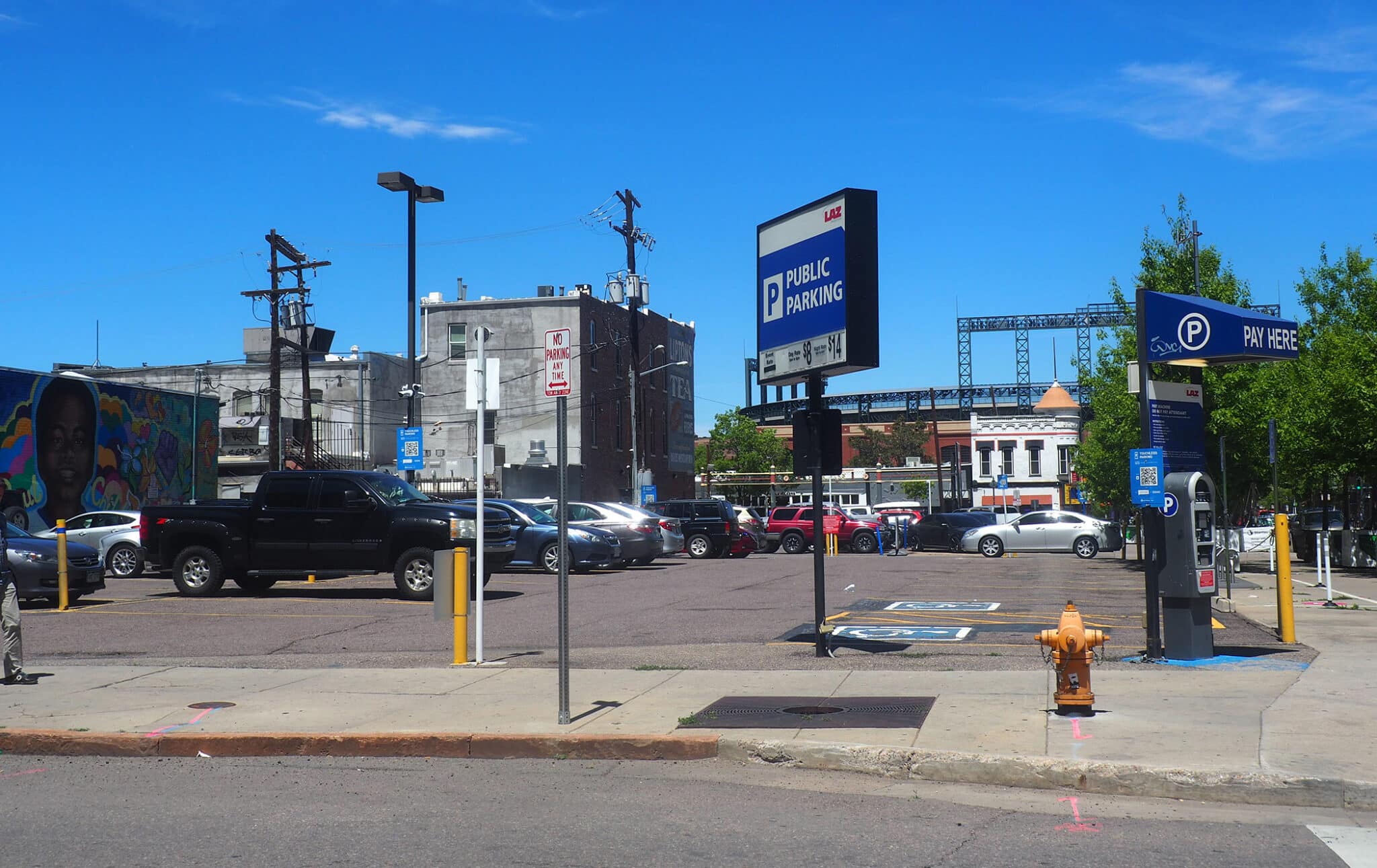 The corner of 21st and Lawrence streets, with Coors Field visible in the background, where a developer has proposed a 37-story residential building. (Thomas Gounley photo)

CMK Cos. wants to put up a skyscraper with 500 residential units on Lawrence Street and a 25-story, 646-unit building on California Street.