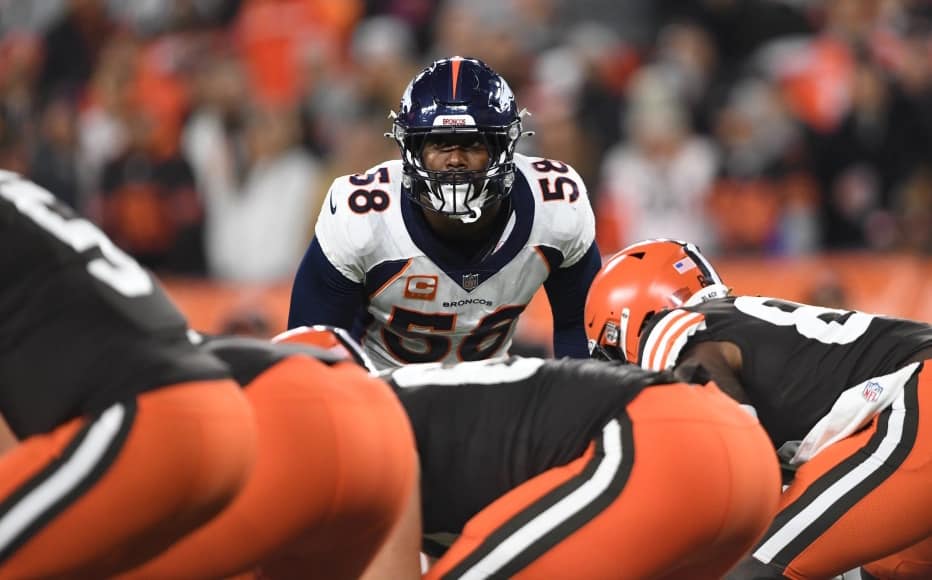 Former Denver Broncos outside linebacker Von Miller gets set before a play in this file photo. (RJ Sangosti/The Denver Post)

Seven months removed from his last game as a Denver Bronco, linebacker Von Miller has put his 18,745-square-foot mansion in Arapahoe County up for sale.

Miller, who was an outside linebacker for the Broncos from 2011 until last October, when he was traded to the Los Angeles Rams, is asking $4.1 million for his nine-bedroom, 15-bathroom home at 17819 E. Easter Ave. in Foxfield.

The town is between Aurora and Parker.

In 2018, Miller built an addition to the original four-bedroom, five-bathroom home that sits on 4.3 acres. The newly constructed portion of the property, which connects to the original home on the first floor, has three bedrooms, five bathrooms, a cigar lounge and a gym with separate hot and cold contrast tubs and a steam room, according to the listing.

Outside, there is a sports court, a fireplace and grill, a concrete-stamped patio and an eight-car garage with space for an RV.

Gwenivere Snyder with Christie’s International Real Estate is marketing the property for sale.

The Broncos drafted Miller second overall in the 2011 NFL Draft, and he received the Super Bowl MVP award when the Broncos won in 2015. Miller also won the most recent Super Bowl with the Rams after being traded to them mid-season. He then became a free agent in March and signed with the Buffalo Bills for a six-year, $120 million deal.

Miller teased that he wished to come back to the Broncos on social media before he signed with the Bills, according to previous coverage.

Former Denver Broncos outside linebacker Von Miller gets set before a play in this file photo. (RJ Sangosti/The Denver Post)