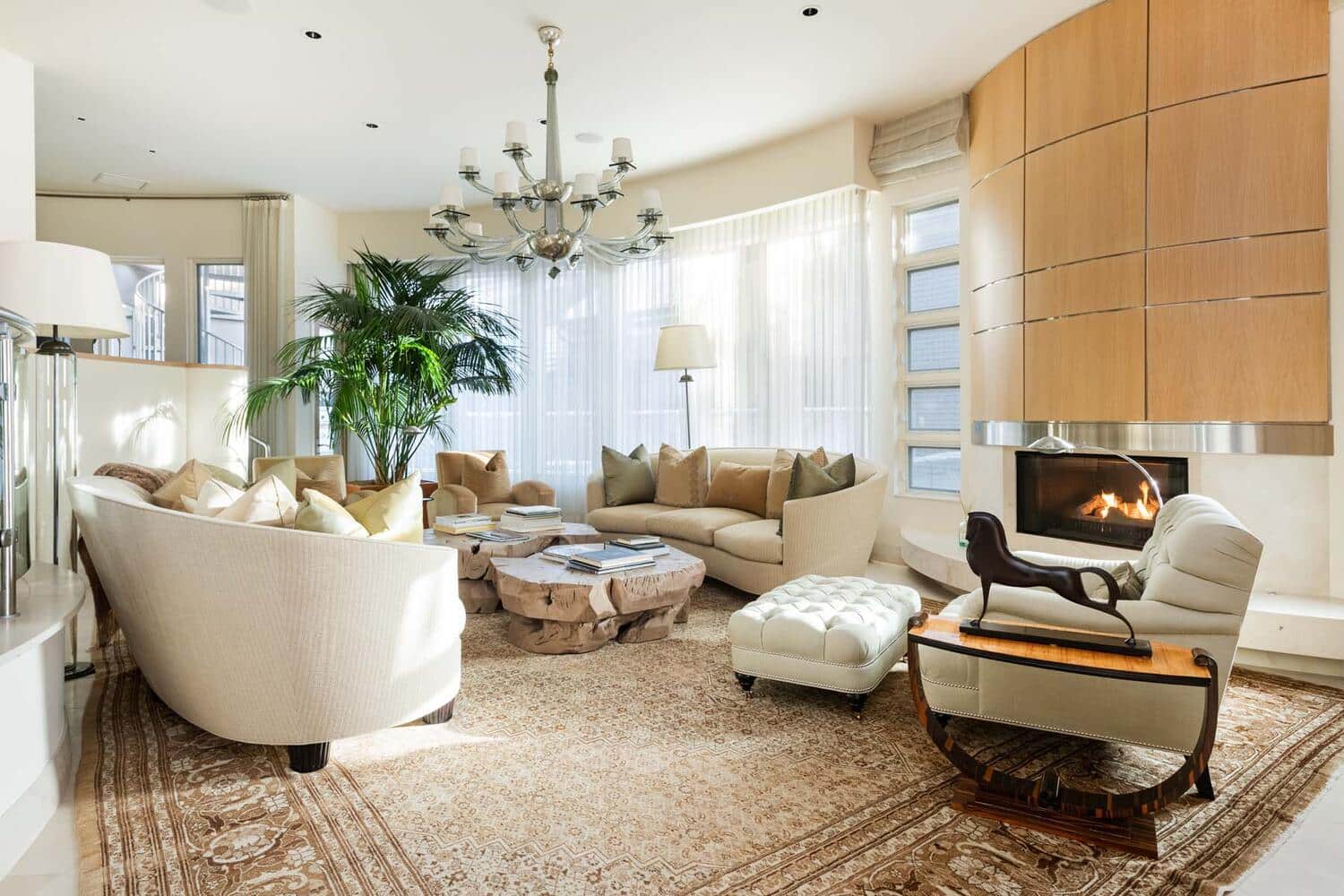 This 11,885-square-foot mansion in Cherry Creek was designed by custom home architect Michael Knorr. It has been listed for $11 million. (Photos courtesy of LIV Sotheby’s International Realty/AT Media)

Homes in Cherry Creek and Hilltop hit the market for $10 million this week.

They’re the highest-priced listings in Denver, although one of the homes was previously listed for even more.

The luxury housing market has heated up in Denver in recent years, but eight-figure home sales are still an extreme rarity. In 2021, only five homes sold for $10 million or more across the metro area.

Sitting on one-third of an acre in Cherry Creek, this 11,885-square-foot mansion features 12-foot ceilings, heated floors and a two-story gym. 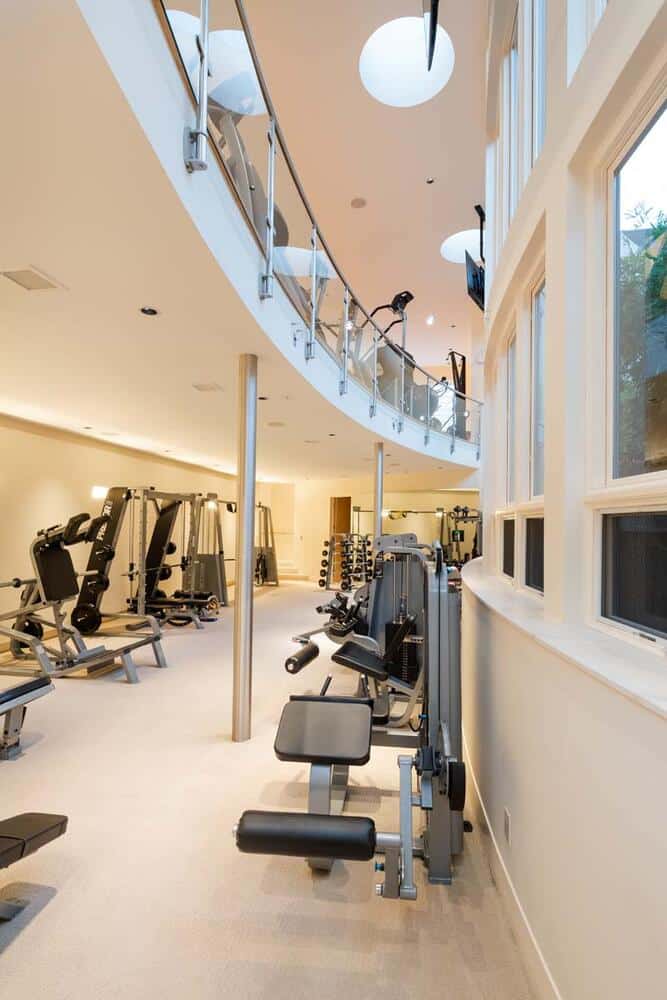 The home has a two-story, state-of-the-art gym.

The home was originally designed by custom home architect Michael Knorr. In 2004 the sellers, Jerry and Barbara Glauser, bought the home at 460 Saint Paul St. for $4.2 million, according to property records. The next year, they purchased the lot next door for $850,000, records show, and added on to the home.

The Glausers previously listed the five-bedroom, eight-bathroom home in 2019 for $14 million with Kentwood Real Estate DTC. 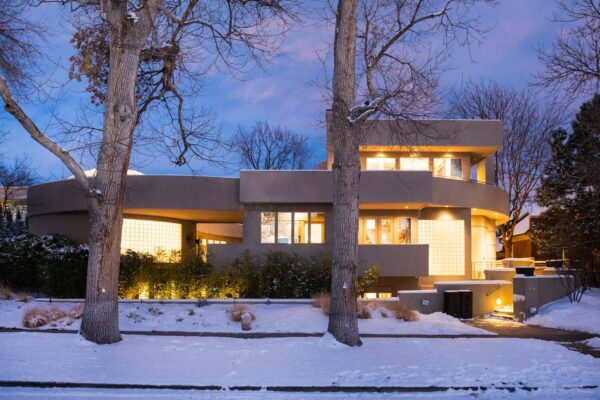 The Cherry Creek home was previously listed for $14 million in 2019.

“Specialty homes like this are harder to price accordingly because of their rarity and smaller buyer pool,” Kerbs said. “I wanted to figure out what the target audience is for this property and market it to individuals that fit this profile. There aren’t many homes with this location, size and capabilities in Cherry Creek.”

Kerbs added that the Glausers decided to sell as they now have three homes elsewhere.

The home is perfect for an athletic individual, Kerbs said, with a massage room, yoga room and state-of-the-art gym with a rotunda cool-down juice bar and glass dome. He said he can also imagine an empty-nester couple that enjoys the convenience of Cherry Creek or a family that wants to take advantage of the outdoor gardens with a Koi pond, the five alley parking spaces with a snow-melt system, plus a five-car, heated garage. 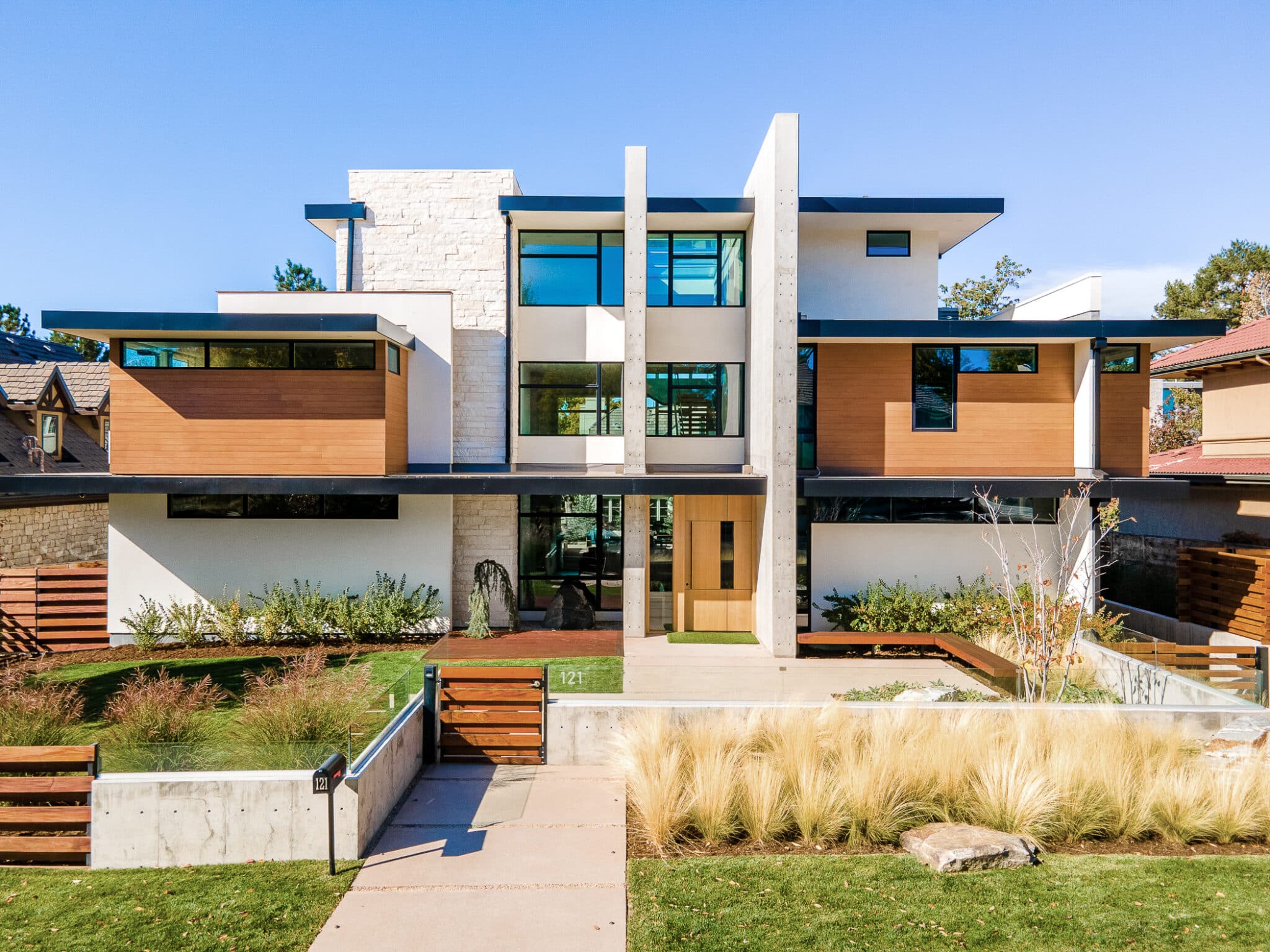 This mansion was designed in the shape of a hashtag. (Photos courtesy of Nate Polta/Milehimodern)

Two years after this 10,268-square-foot custom mansion was built, the owners are ready to sell.

The seven-bedroom, 10-bathroom home was completed by Nest Architecture in 2020 and designed in the shape of a hashtag, according to listing agent Peter Blank with milehimodern.

Blank introduced sellers Ashely and Matthew Vachon to their architect Scott Parker after they fell in love with Blank’s own modern minimalist ranch home just a block over at 121 S. Cherry St., which he sold for $4.5 million in May. 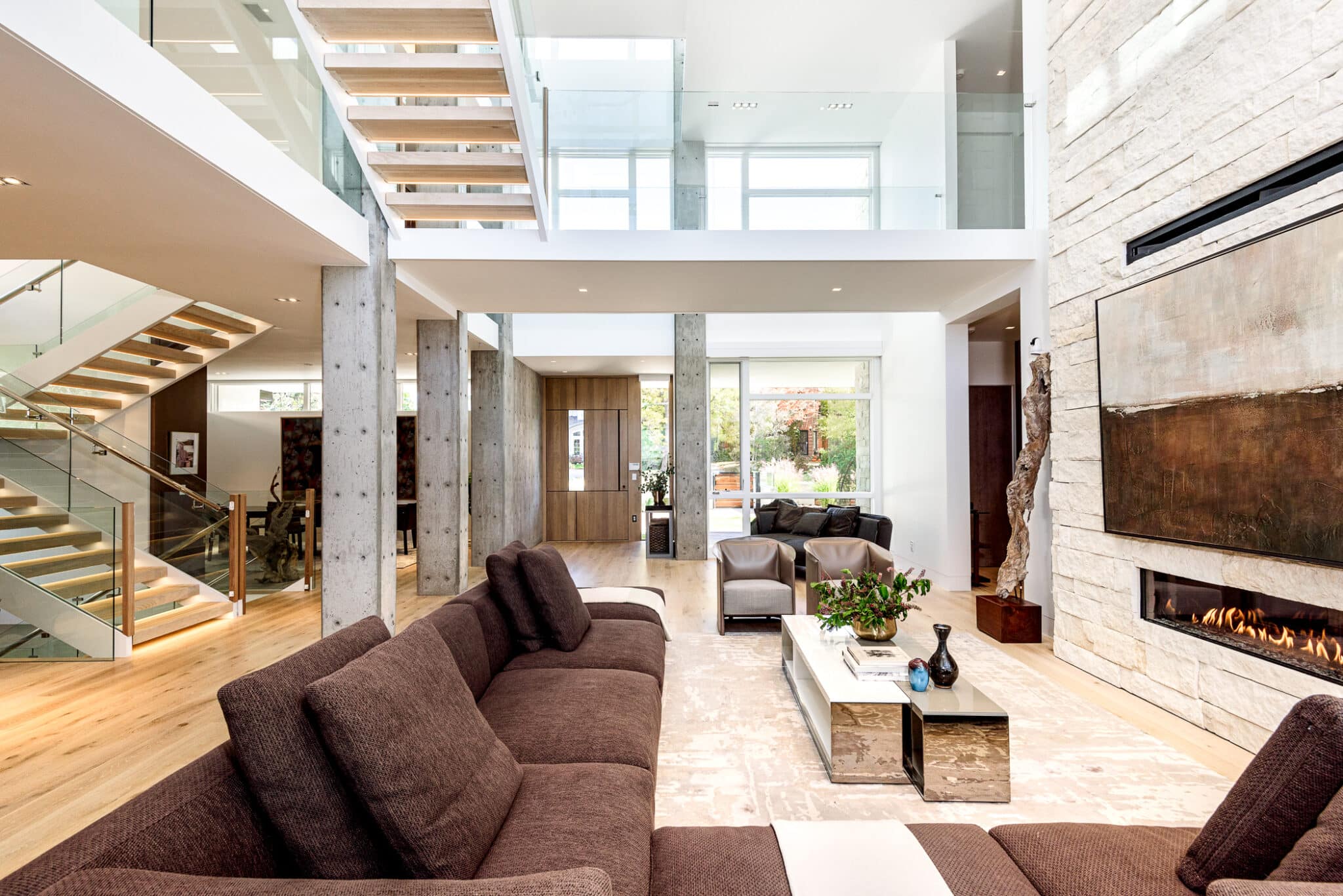 This 10,268-square-foot contemporary mansion in Hilltop has 30-foot ceilings.

“But they needed something bigger,” Blank said.

The home took nearly four years to build, according to Blank. It features 30-foot ceilings and a sunlit atrium with a bridge that connects the two distinct sectors of the home. 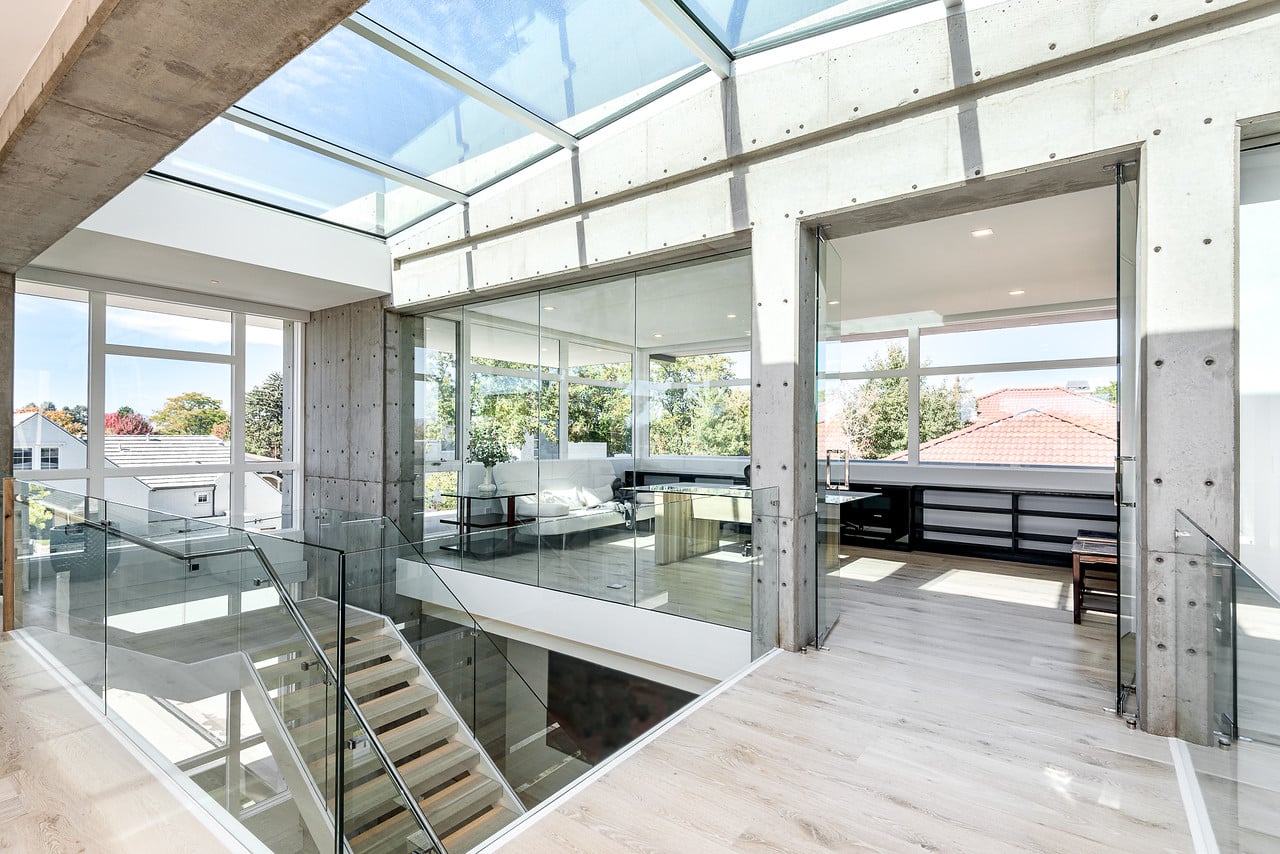 The newly built Hilltop home has an abundance of light.

Blank said they reached the $10 million price point due to the cost of construction materials and the execution of the architecture and engineering.

“To be honest with you, as a broker, it’s an expensive house. But what I will say, it’s not overpriced,” Blank said. “It’s really easy to see when you’re in the property that it’s $1,000 per square foot to build this.”

This 11,885-square-foot mansion in Cherry Creek was designed by custom home architect Michael Knorr. It has been listed for $11 million. (Photos courtesy of LIV Sotheby’s International Realty/AT Media)

At $11 million and $10 million, respectively, the two homes are the highest-priced listings in the city.