Blake Eatherton has found a spot to park his coffee cart business.

The former geologist, who launched a mobile coffee cart called The Dnvr Coffee Co. in 2019, opened a cafe within the University of Colorado Denver’s Lawrence Street Center at 1380 Lawrence St. at the end of January.

Eatherton said the facilities manager for the center, as well as the Anschutz Medical Campus, was walking through Wash Park with his wife one weekend and stopped by The Dnvr Coffee Co. cart.

“A lightbulb went off in his head, since there was a vacancy for a coffee shop at the Anschutz campus and he needed a replacement quick,” Eatherton said. “So, he turned around and gave my employee his card and then we made magic.”

Eatherton moved one of his carts from Wash Park to the Anschutz Medical Campus in July and decided to dedicate the other, which he launched in 2020, to events only, including at apartment and office buildings.

“On a good, average weekend at Wash Park we would make $600 a day with two carts, but at Anschutz we rarely, with one cart, do less than $600, and we were able to lower prices, too,” Eatherton said. 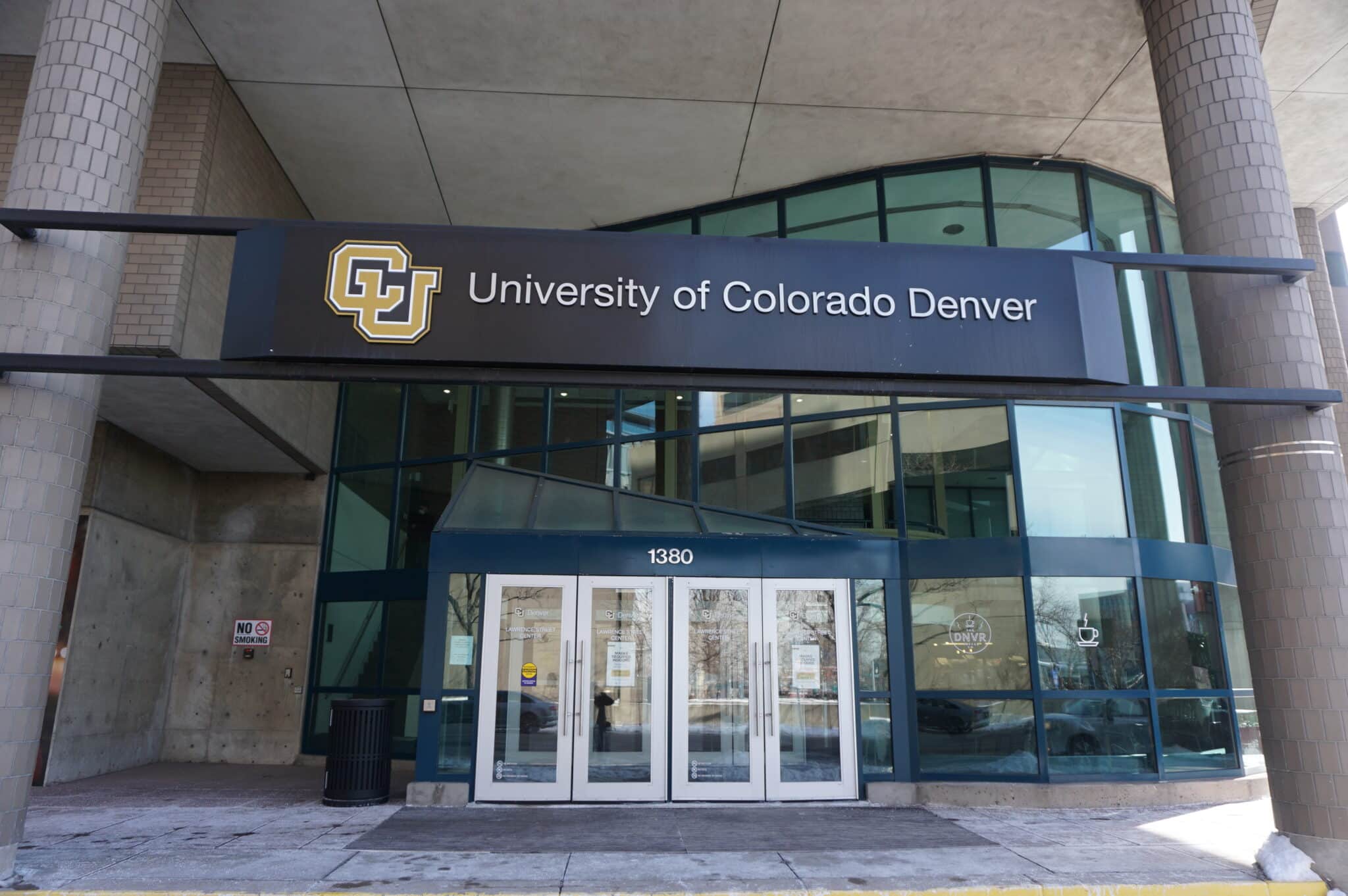 Eatherton opened his first cafe in the University of Colorado Denver’s Lawrence Street Center in January.

After seeing the success of the cart, the facilities manager offered Eatherton the space in the Lawrence Street Center, which houses the chancellor’s office. He signed a year-lease for the 400-square-foot cafe in October with the option to renew if the concept proves successful, and he’s dipped into his savings to get it up and running.

The Dnvr Coffee Co.’s cafe serves bagels from Leroy’s Bagels in the Highlands, coffee from Glass Arrow and baked goods and sandwiches from Etai’s Bakery & Cafe.

“I want to be accessible to as many people as possible,” Eatherton said. “While paying people a livable wage, I also want the working class to be able to come here and have a coffee. Otherwise, you’re just supporting the working class by charging the bourgeoisie.”

The 33-year-old Aurora native started The Dnvr Coffee Co. as a side gig. But when the pandemic hit, he lost his job as a geologist and took it on full-time. 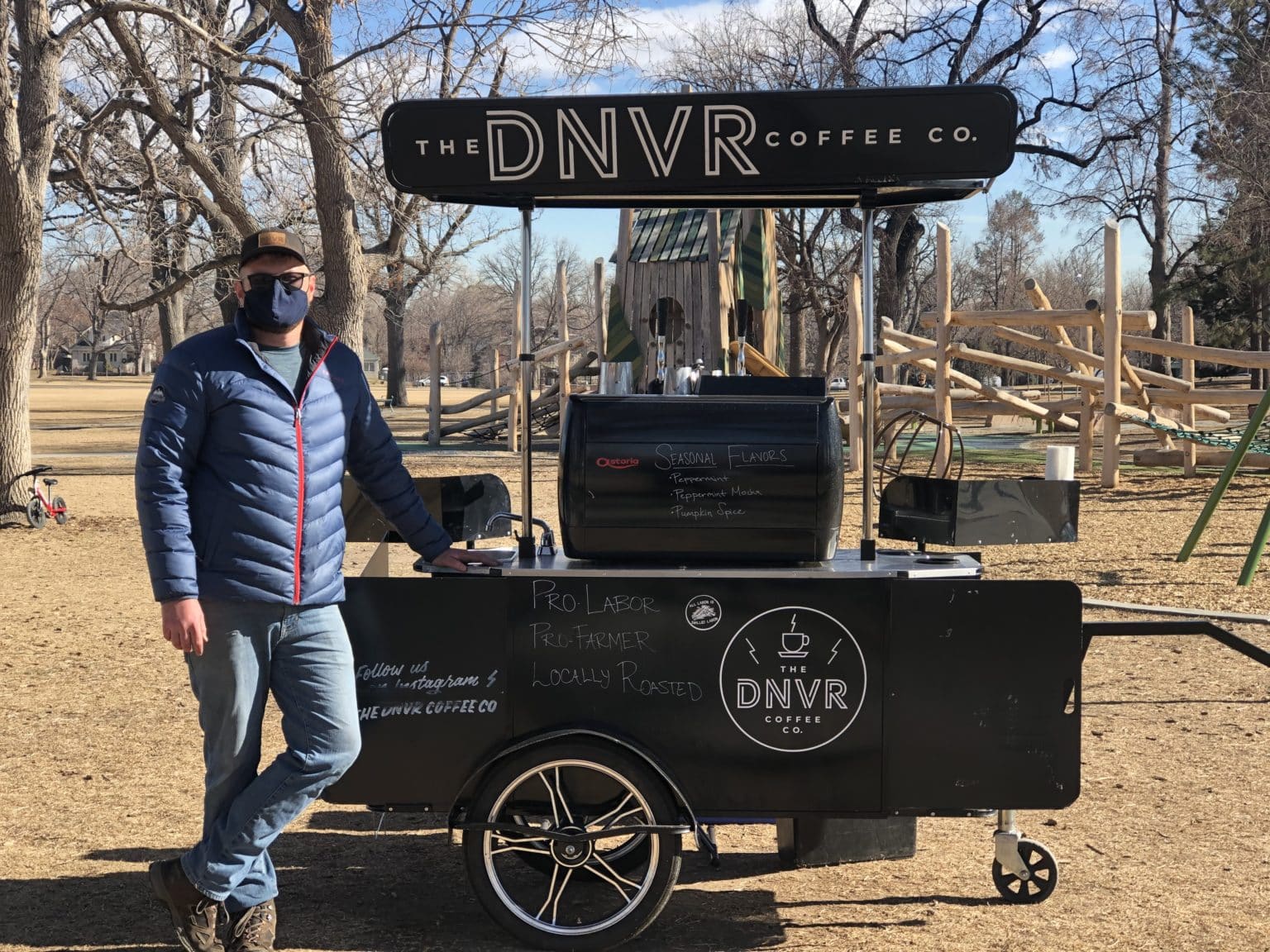 Since he had previously worked in hospitality jobs and felt exploited, he said his goal has been to always offer wages that he “thought were fair and necessary to live off in Denver.” When he first started the cart, his employees were paid a starting wage of $16 an hour, plus tips, and he’s since raised that to $17.50 plus tips.

“Every time we start making more money, I try to raise the wages,” Eatherton said.

He has three employees and is hiring two more. He said he doesn’t pay himself more than his highest-paid employees.

In September, he received an offer for another geology job. But he turned it down after seeing the pay grade.

“They offered me a similar wage to what I can make managing my cafe. So, I just said no thanks — which goes back to the idea of exploitation because I had eight years of oil and gas experience and was making six figures before,” Eatherton said.

And although margins are tight, Eatherton said it “gives me an incentive to get this company rolling to increase revenue and get back to my usual income level, and get other people up to that level who deserve to be, not just because they’re working in oil and gas,” he said.