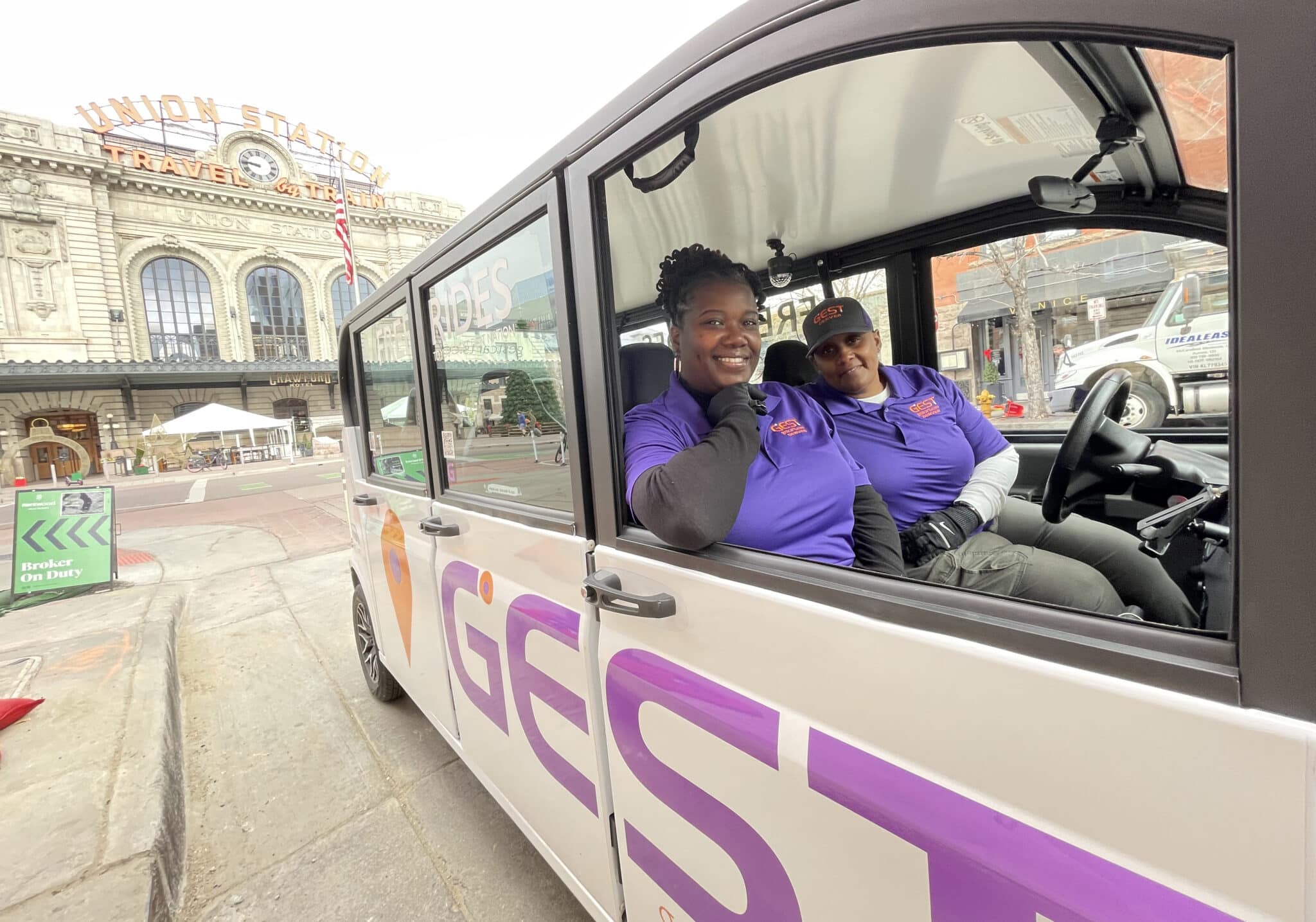 A new ride-hailing company drove into the city about two weeks ago, offering free transportation primarily in the LoDo and Highland neighborhoods.

GEST Carts Denver owners Murjani and Rhonda Harris, who are married, launched the local branch of the company. The business aims to fund itself through advertising emblazoned onto the vehicles and by offering other promotional options.

“­­­­The whole entire vehicle can be wrapped in whatever advertisement the company wants, whatever design that they like,” Murjani said. “We discuss prices when we know more about what the organization is looking for, but we’re competitive with other advertising options within the Denver metro area.”

GEST does not currently have any advertisers. Rhonda said they wanted to show off their own brand at launch, but advertising will be coming to the vehicles soon.

GEST is not the first company to try to offer free rides in downtown Denver and rely on advertising. Free Ride launched locally in 2018, but no longer operates in Denver. The company, now called Circuit, didn’t respond to a request for comment. Its website says it still operates in other cities, and is working “to try and build a long term service” in Denver.

GEST uses two six-person, electric Polaris Gem E6 vehicles, which start at around $18,000, according to the manufacturer’s website. Drivers do not go faster than 25 mph.

GEST’s Denver service area is bounded by Arapahoe Street to Park Avenue West, running north to the corner of Pecos Street and 46th Avenue, down to the edge of Zuni Street and back down to Arapahoe in an inverted L shape. The service area includes destinations such as Coors Field, Union Station and Larimer Square.

The hours for GEST currently are 8 p.m. to midnight on Fridays and Saturdays, and “brunch hours” on Sunday. Rhonda said the rest of the week, during the company’s initial phase, is going to be taking rides as they come depending on whether they are available during the day.

“I was out last Saturday and Sunday, and I did a few rides on Saturday, a few rides on Sunday,” Rhonda said. “People don’t believe that it’s free. That’s the part that we had to get over, but … I think once they see me out more, they’ll know that it’s really free.”

Rhonda is the main driver for GEST in Denver now, but the couple said they hope to hire more drivers by the end of December. So far, she said she’s given about 20 rides.

“We do have one other driver and currently have others applying to be drivers, so we’ll be adding more to the team soon,” Murjani said.

GEST is an acronym for Green Easy Safe Transportation. The company started in 2018 in Cincinnati, and the Harrises purchased the license for the Denver branch.

Murjani said she would like to eventually expand the company to Cherry Creek, Boulder and other urban destinations.

Besides wrapping the vehicle with advertisements, the couple plan to place client pamphlets behind the driver’s seat and hope to have app-based advertising online soon.

“We have looked into what the other competition is here in the Denver area, but we’re just different in the sense that we can operate year-round,” Murjiani said. “We have heating and air conditioning, and we have several other options for advertising.”

Murjani also said the vehicles are transformed at night.

“It’s a party on wheels with strobe lighting and music, and it’s an experience that we’re selling. Not just the advertising,” she said.

Rides can be ordered through the GEST app or by calling a number. Although the Harrises admit they’ve had some technical issues with the GEST app, they said they hope to have it fully functional soon. In the meantime, people can call 833-237-4378 to order a ride within the service area.

GEST Carts Denver started offering free rides around LoDo and Highland but doesn’t have any advertisers yet to cover the overhead.