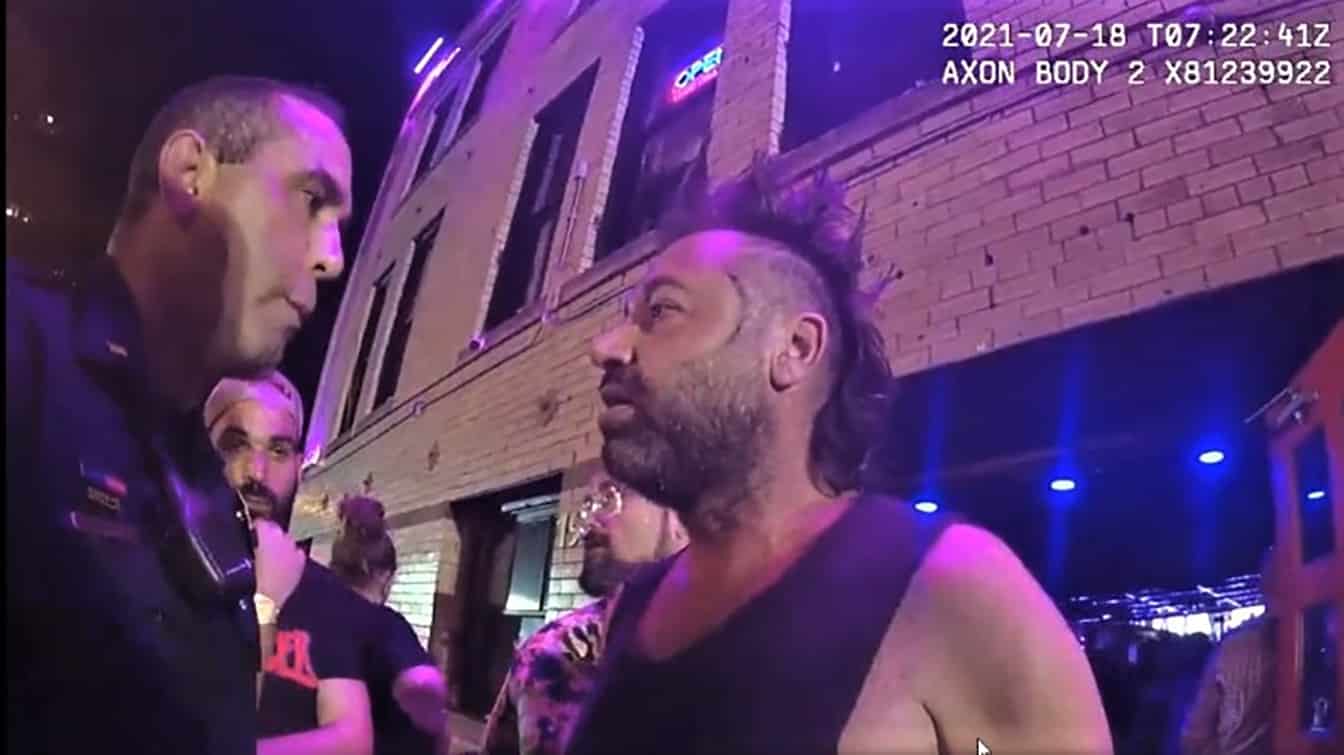 The owner of a Denver nightclub defended himself as a legitimate businessman who maintains a safe environment for his patrons during a city hearing Thursday.

Beta Nightclub owner Hussam Kayali, who also goes by Valentes Corleons, said that after problems were observed by the city over the summer, he took measures to improve security and capacity compliance.

“I got new management, new security,” Kayali said during the second day of the hearing, which could end with the club’s liquor and cabaret licenses penalized or revoked over alleged violations.

“I’m there since (the club) opens and closes. I (went) into clubs (starting) 15 years ago and studied everything before I came into this business. I usually do my research before I get into something. They call me the king of nightclubs.”

As BusinessDen previously reported, the Denver Police Department, Denver Fire Department and Excise and Licenses investigated Beta Nightclub at 1909 Blake St. between June and August after receiving several complaints and seeing an increase in 911 calls near the business.

The city became concerned after a shooting took place May 23 near the club. Police also reported a man was shot and killed around 1:40 a.m. Aug. 22 at the corner of 19th Avenue and Blake Street, but the department did not link the shooting to Beta in a news release.

Beta faces 10 alleged violations of the Denver municipal code and Colorado state law, according to the hearing order. City attorneys asked the mediator of the hearing to recommend the licenses be revoked.

Aaron Acker, the attorney for Beta, tried to prove that the club was not overcrowded July 17 and into the early morning of July 18. City attorneys, fire personnel and police officers allege there were issues that night, including Kayali being “agitated” by their presence.

Acker suggested Beta may not have been able to stop small amounts of narcotics from getting into the club, even with trained security guards.

He also argued that the Beta was not responsible for the violence that occurred near the business.

On Wednesday, DPD officer Alexandra Spencer said she went undercover twice in June, and on one occasion she came in with a concealed firearm. The officer said security guards did not detect it, even after a pat down.

Kayali said that couldn’t be true.

“You cannot come in with a razor or anything, (security) will catch it, and if Spencer had a gun, and I put this on God, who I love, security would catch it,” Kayali said.

When asked if Kayali was saying Spencer lied about having the weapon, he said, “(The officer) walked in with a gun and we didn’t catch it? Impossible.”

Asked about his comments claiming to be a member of Cosa Nostra, the Sicilian mafia, Kayali said he was.

When he was asked about an incident where an officer was checking to see if the club was overcrowded and Kayali allegedly confronted the officer, he responded, “It wasn’t like that.”

“One of the officers went upstairs and jumped in my face (and said), ‘I don’t like what you’re doing here,’” Kayali said. “I said, ‘I don’t take orders from you. I know you’re a sergeant.’ … I said, ‘I’m a made man in the mafia, and you should watch what you say.’”

Kayali said it’s not illegal to be a “made man,” and the FBI is aware of that status. He claimed the bureau offered him “a job six years ago,” but did not elaborate.

At one point when the city’s lead attorney on the case, Katie Conner, was pulling up an exhibit, Kayali tried to speak to mediator Federico Alvarez, the judge in the hearing, but his attorney stopped him.

“No one for years wants to talk to me,” Kayali said. “I’m just asking to be treated as a human.”

Michael McCray, one of the former co-owners of Beta Nightclub, said he initially had a “tumultuous” relationship with Kayali, who he hired to run bottle service and to increase business.

McCray said Kayali’s methods were not up to standards that he wanted, and their relationship soured quickly. In 2019, when Kayali became a manager with Beta, he obtained about 20 percent to 25 percent of the ownership of the business and the liquor and cabaret licenses, according to a hearing document.

“I just did not believe it was responsible management,” McCray said. “With Beta being as high-profile as it is, I just did not think it was a good fit. We were concerned enough that we did not want to be attached to that venue anymore.”

Kayali said he didn’t need to take advice from McCray, someone who had let the club nearly fall into eviction proceedings.

“He’s the last person I would take advice from,” Kayali said.

The city’s Department of Excise and Licenses is overseeing the hearing regarding the club’s licenses. Department spokesman Eric Escudero told BusinessDen that Alvarez will likely issue a recommendation in about a week, and then Excise and Licenses Executive Director Ashley Kilroy will issue a final decision.

During Thursday’s hearing, Acker called Kayali to the stand along with Bryant Watts, who worked at Beta and was asked about posting occupancy signs; Christopher Vitale, who worked for Beta as a manager over the summer and was recently promoted to general manager; former Beta employee Armando Martinez; and Denver Police Department officer Ramone Young.

Acker asked Young, who worked off-duty at Beta, if there were times in the club when he felt unsafe, and Young replied, “When it came to the gangs, yeah.” After two “insufficient” managers were fired, Acker asked if Young felt security issues improved, to which he said, “Some did, yes.”

Vitale said the security at Beta worked to ensure no weapons or drugs entered the club and that he oversaw the operations of the contracted security firm over the summer.

“If it’s something minor like a pocket knife, I will take that, but if it’s drugs or paraphernalia, they’re not allowed in,” Vitale said. “We have two points of entry, but only one we use when we’re operating. There’s one in the back but we don’t use that during the times we’re open for business.”

Vitale responded to questions about whether people were being served past 2 a.m. on July 11, which is Denver’s cutoff time for serving alcohol.

The transactions, according to records provided by Beta, showed the last alcohol purchase was before 2 a.m. on July 11. There were other purchases that took place between 2 a.m. and 3:06 a.m., but Vitale explained that had to do with ensuring bottle service records from purchases earlier in the night were correct.

The second day of the Beta Nightclub liquor and cabaret license hearing kicked off with a two-hour cross-examination of a Denver police detective, who gave testimony about the venue’s management the day prior.

Det. Derrick Keeton worked off-duty from June 18 to Aug. 22 at Beta, where he said he tried to “change the culture” to make the club safer.

Acker presented emails between Keeton and Det. Paul Streate that showed they had talked about the problems taking place at Beta over the summer. Acker also protested that more emails had not been produced through a subpoena after witnesses said more existed, but Alvarez continued with the hearing regardless. 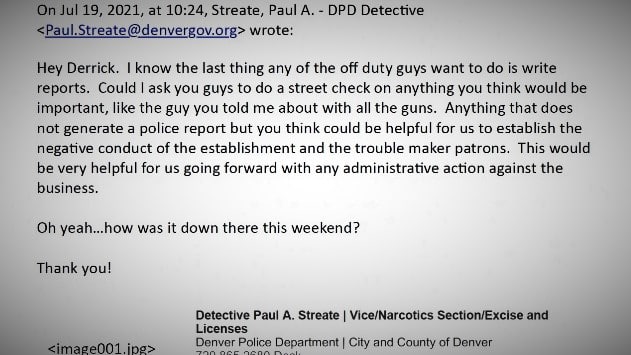 Emails are posted Wednesday by Beta Nightclub’s attorneys from Det. Derrick Keeton and Det. Paul Streate during an online hearing on the club’s liquor and cabaret licenses. (Screenshots from Department of Excise and Licenses hearing)

Acker tried to get Keeton to name specific people who he had identified as possible gang members or known drug dealers at the club, but the detective said that could compromise their safety.

“I will not be giving names because of confidential informants and safety,” he said.

Acker asked Keeton if he thought his suggestions to “change the culture,” which included implementing a dress code and using discretion to not let people in the club, were discriminatory. He said that kind of enforcement could have made Beta vulnerable to a lawsuit.

“No, I’m definitely not going to agree with you on that,” Keeton said. “I never said someone could not come into the club because of criminal history.” 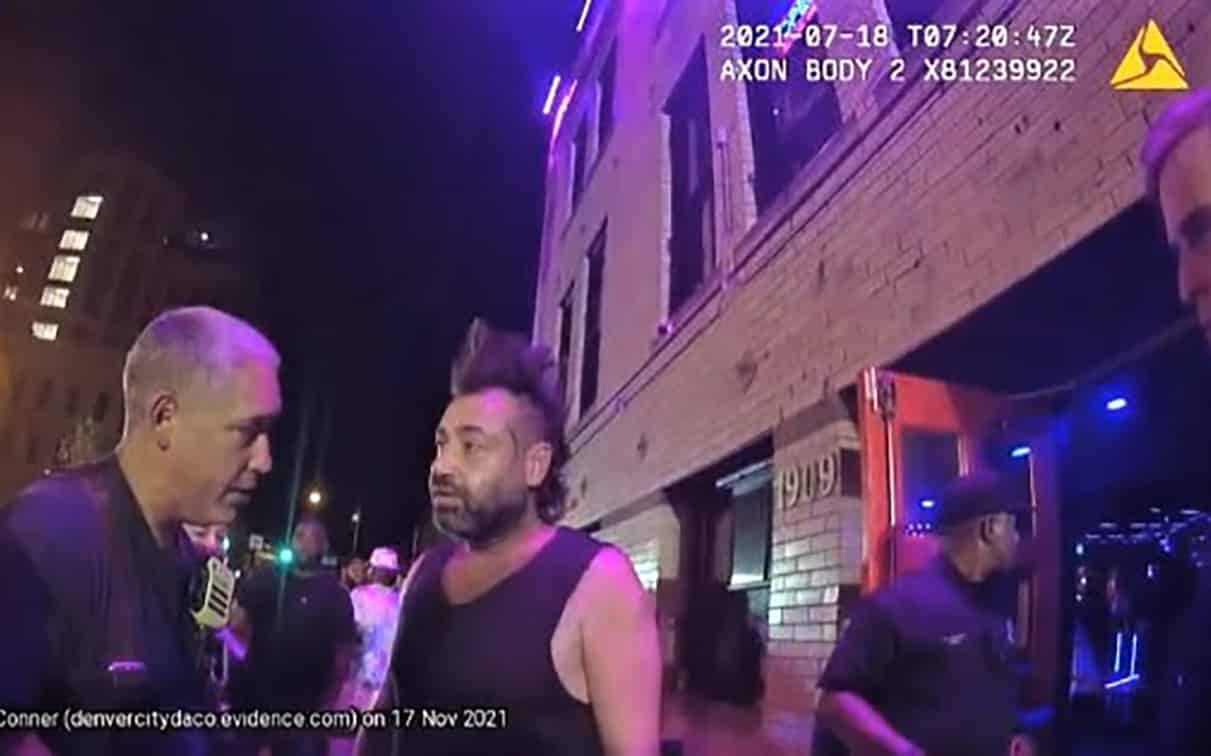 “I got new management, new security,” said Hussam Kayali, whose Denver nightclub faces possible fines or the loss of its liquor and cabaret licenses.