Three Denver real estate brokers put in a professional penalty box for a year after jumping firms say the non-compete clause they signed with a former employer shouldn’t apply after six-and-a-half years on the job.

But their former employer, Newmark, says the clause is reasonable given the nature of the commercial real estate business, and that the three men — Terrance Hunt, Shane Ozment and Chris Cowan — knew they’d be sued to such an extent that they asked their new employer to cover all their legal costs.

Those are dueling viewpoints argued in court briefs ahead of a scheduled appeals court hearing in New York this Thursday.

The judge in the case will be asked to rule on whether an injunction put in place in July by a lower court — which bars the three from competing with Newmark in Colorado for one year — should remain in place. A ruling is not expected for weeks.

Here are highlights from briefs both sides have submitted ahead of the hearing.

Non-compete dates to 2014 acquisition by Newmark

Before they left Newmark in May, Hunt, Ozment and Cowan had worked for the company since 2014, when Newmark acquired their previous employer: Apartment Realty Advisors of Colorado, or ARA.

The men joined ARA between 2002 and 2004. Hunt was given a 1 percent ownership stake in ARA when he joined the firm in 2004, according to a brief filed by attorneys for the three brokers. Ozment and Cowan were each given their own 1 percent stake in 2012.

Because they owned a portion of ARA, they signed the purchase agreement when ARA was acquired in 2014.

That agreement included a clause stating that, if they left Newmark, they would not be able to compete with the company for two years. That would drop to one year if the men worked for Newmark for seven years, according to the company.

In the brokers’ brief, the men say they were unaware the clause was buried on page 60 of the purchase agreement. They say they only knew that a separate “service agreement” required them to work for Newmark for five years, and not compete with the company during that period.

The men say they were “forced” to sign the purchase agreement, and did not have the opportunity to negotiate terms because they held such a small ownership stake.

“Although the Brokers were purportedly represented by counsel retained by ARA Colorado, the Brokers were never offered an opportunity to participate in those negotiations, and no lawyer ever spoke with them concerning their obligations under the Purchase Agreement,” the brokers’ brief reads.

Newmark, in its own brief, says it paid $17 million total for ARA, and that the three brokers were collectively paid $1.5 million for their ownership stake. The brokers dispute this slightly, saying they were actually paid $425,000 collectively for their stake, and that the rest was a signing bonus.

Either way, Newmark says the brokers were responsible for reading the purchase agreement and knowing about the non-compete clause.

“To the extent Defendants-Appellants chose not to read or understand these provisions, and to instead rely upon other sellers to review the documents, that decision was made by sophisticated, well-compensated executives who are bound by the documents they voluntarily signed,” Newmark’s brief reads.

During their years working at Newmark, Hunt and Ozment brokered many of the Denver area’s largest real estate transactions — the sales of large apartment complexes that often go for eight or nine figures. Cowan worked on some of those deals, and also regularly brokered the sale of land to multifamily developers.

Around 2019, with their five-year “service contract” set to expire, the brokers and Newmark began negotiating about a possible renewal, according to the brokers’ brief. That’s when they say they became aware that Newmark planned to enforce the non-compete if needed.

The brokers say they were “shackled to the company.” Newmark says it “conducted negotiations with the ultimate goal of continuing to employ” the men. 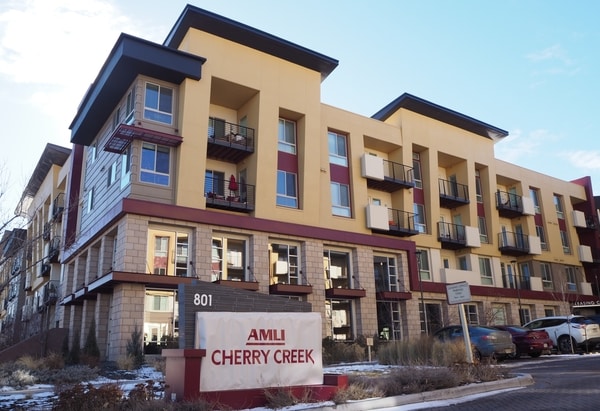 In 2018, Terrance Hunt and Shane Ozment brokered the $108 million sale of the 341-unit apartment complex at 801 S. Cherry St. in Glendale to Chicago-based AMLI Residential.

How the mass resignation went down

Hunt, Ozment and Cowan weren’t the only three brokers that left Newmark at the end of May.

Six other less-senior brokers also jumped with them.

Newmark says it learned on Monday, May 17, that Hunt, Ozment and Cowan would be leaving the company. That evening, the brokers set up a call with Newmark management.

“With the rest of the ARA Colorado team listening in, Defendant-Appellant Hunt spoke on their behalf, informing Newmark’s Regional Managing Director over the phone that the entire group was resigning,” the brief reads. “Until that moment, Newmark believed that negotiations with the Defendant-Appellants were ongoing.”

After the call, Newmark says it “received nine virtually identical letters of resignation.” On Wednesday, May 19, the brokers started working at CBRE.

CBRE trumpeted the hirings in a press release.

Newmark and the brokers traded lawsuits within a matter of days. In mid-July, a judge in New York essentially said that Newmark appeared to have a solid case, and ordered the men not to compete against Newmark within Colorado for a year — a modified version of the original non-compete clause.

In the ensuing months, lawyers for the three brokers have attempted to clarify what work the men legally can do without violating the non-compete, going so far as to ask whether they could even attend industry conferences. They have received minimal clarification.

The other six brokers who jumped from Newmark to CBRE are not involved in the litigation because they did not sign the 2014 purchase agreement. CBRE itself is also no longer a party in the litigation.

Newmark on why non-compete is proper

When it purchased ARA, Newmark says, it was basically buying the connections that the firm’s brokers had.

“In investment sales brokerage, virtually the only asset possessed by firms like ARA Colorado and Newmark is its intangible goodwill, which takes the form of customer relationships, internal relationships between and among brokers, reputation and branding,” the company’s brief reads.

That’s why a non-compete clause is necessary, the company says.

“Because much of the goodwill is essentially a broker’s network of relationships, that goodwill follows the broker if they move to a new firm without providing his brokerage the opportunity to retain it during an appropriate period of non-competition,” Newmark’s brief reads.

Newmark said the resignations of the three brokers and their colleagues left the firm with no active brokers to work on Colorado multifamily deals.

“The one year ordered by the trial court is the bare minimum needed for Newmark to protect its multifamily brokerage business,” Newmark’s brief states.

Newmark also highlights the fact that Hunt, Ozment and Cowan were paid millions of dollars in commissions during the nearly seven years they worked for Newmark.

“Defendants-Appellants attempts to cast themselves as down and out with no opportunities for employment is contrary to the facts,” Newmark says in its brief.

“Defendant-Appellants … not only have found a place for their business, they negotiated favorable terms for themselves even if the restrictive covenant was found to be enforceable, and have been rewarded by a competitor with many millions of dollars in compensation for ransacking Newmark’s business,” Newmark says in its brief. 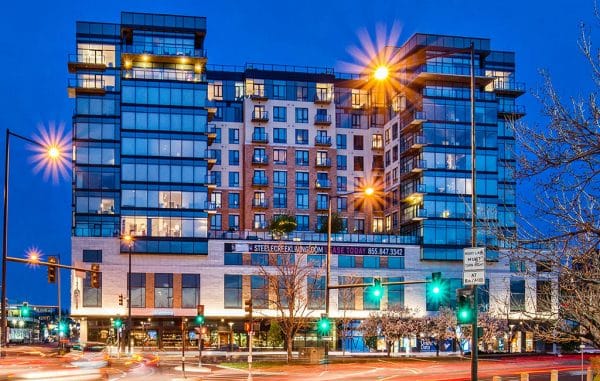 Brokers on why non-compete is unreasonable

In their own brief, the three brokers argue that the non-compete clause “was manifestly one-sided and unfair because it purported to apply in perpetuity.”

They say the clause shouldn’t apply given that they worked for Newmark from 2014 to May 2021.

“Nothing in Newmark’s response changes the fact that it had more than enough time over the past six and a half years to capitalize on the goodwill the Brokers brought with them from ARA Colorado,” the brokers’ brief states.

The men say their group generated about $16 million annually, far outpacing what they were paid in 2014 for their ownership stake. At the same time, however, they state that amounts to less than 1 percent of Newmark’s annual revenue.

The men argue Newmark has used the non-compete clause as “leverage to extract contractual concessions during negotiations to extend the Brokers’ service with Newmark.”

“It was Newmark’s inequitable treatment of the Brokers and heavy-handed use of the non-compete clause in an effort to suppress compensation levels and extract contractual concessions that directly precipitated the Brokers’ departure,” the brokers’ brief states. “Newmark dragged out the negotiations for years, repeatedly reneged on agreed-upon terms, and threatened the Brokers with crippling litigation if they left Newmark.”

“The non-compete clause is now nothing more than a naked restraint on the Brokers’ economic freedom,” the brokers’ brief states.

At the lower court stage, the brokers had argued that the non-compete clause no longer applied because it was superseded by a 2018 agreement they signed with Newmark. But the men are no longer arguing that point at the appeals stage. Newmark says the men requested the 2018 agreement so they “could pass less in taxes.”

According to Newmark’s brief, at a previous court hearing, Cowan testified that prior to agreeing to join CBRE the men requested that CBRE indemnify them — or cover their legal costs — if Newmark sued them.

“The outcome of this request was that CBRE instead provided each of the Defendants-Appellants with a lucrative signing bonus, which the Defendant-Appellants understood were to be used to help cover their legal expenses if Newmark sought to enforce its rights,” the brief states.

The men also received “lucrative upfront forgivable loans,” according to Newmark, in the amount of $3 million each for Hunt and Ozment and $2.13 million for Cowan.

“Having now been handsomely compensated for packaging and selling the same business twice, Defendant-Appellants’ dubious pleas of hardship are entitled to no weight,” the Newmark brief states.

But the brokers argue that not working for one year will have a great cost to their career.

“A signing bonus and loan will not remotely shield the Brokers from the irremediable harm that will be inflicted upon them if they are excluded from their professions for an entire year and compelled to let their reputations and client relationships languish,” the brokers’ brief states.

The brokers also say that Newmark didn’t pay them everything they owed.

“To the extent Newmark will nevertheless incur losses in the coming year, they will be offset by the $4.6 million in earned equity that Newmark has clawed back from the Brokers, as well as the at least $350,000 in compensation that Newmark has refused to pay them,” the brokers’ brief reads.

Terrance Hunt, Shane Ozment and Chris Cowan were sued by their former employer when they jumped to rival CBRE in May.