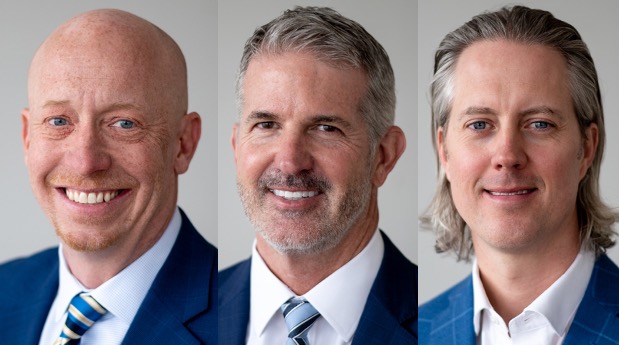 Newmark has sued three high-powered Denver multifamily brokers that last week jumped to CBRE in state court in New York, alleging they are violating non-compete agreements hammered out during a 2014 acquisition and have “looted” the firm.

Brokers Terrance Hunt, Shane Ozment and Chris Cowan, meanwhile, have countersued Newmark in state court in Denver, saying the 2014 agreement was superseded by a later one, and is unenforceable anyway.

The lawsuits — first reported by The Real Deal — detail the drama behind the scenes of last week’s announcement from CBRE that it had hired Hunt, Ozment and Cowan, along with six other less-senior multifamily brokers from Newmark.

Hunt and Ozment handle many of the region’s high-eight-figure or nine-figure apartment complex sales, including the state’s largest-ever such transaction in 2016. Cowan specializes in the sale of sizable tracts of urban and suburban land, typically for multifamily or mixed-use development.

CBRE announced the hiring of Hunt, Ozment and Cowan publicly on the morning of May 19. Newmark’s lawsuit in New York, which also names CBRE as a defendant, was filed hours later.

According to Newmark, when the company purchased ARA, Hunt, Ozment and Cowan collectively received about $1.5 million, because they were minority owners of ARA’s Colorado division. In subsequent years, they received between 50 percent and 60 percent of their production revenue as compensation.

As part of the deal, according to Newmark, the three brokers agreed that they would not work for a “competing business” for two years if they left before October 2021. If they left after that date, that period was reduced to one year.

“During this time, Newmark could re-sign personnel to protect against future solicitation efforts, redouble efforts to maintain customer relationships, and transition the business from the Individual Defendants’  leadership to an appropriate replacement team,” Newmark’s lawsuit reads. “Without these protections, ARA Colorado could precipitously lose its market position before Newmark was able to develop any plan to recover it (which is, in fact, what has occurred).”

Newmark noted that Hunt, Ozment and Cowan had their own legal representation when the deal was hammered out.

As for its rival, Newmark alleges in the lawsuit that CBRE “has tortiously facilitated that misconduct and exacerbated the harm it has caused Newmark.”

A CBRE spokesperson said in a statement that “we look forward to a swift resolution of this matter through the legal process.”

“The decision by Terrance Hunt, Shane Ozment and Chris Cowan and their colleagues to join CBRE is a strong endorsement of our platform,” CBRE said. “We believe our recruitment process was proper.”

Hours after Newmark’s lawsuit, on the same day their hiring was announced, the three brokers filed their own lawsuit in Denver. In it, they suggest they were pressured to agree to the 2014 deal.

“During the purchase transaction, Plaintiffs — who held very small minority interests — were told by the other parties to the transaction that they had to sign the Purchase Agreement and had no ability to negotiate its terms,” the countersuit reads.

The brokers state that, in October 2018, they entered into an agreement with a Newmark subsidiary, which outlined their continued employment through December 2019. They argue this “expressly superseded” the 2014 agreement.

The brokers also argue the non-compete component of the 2014 agreement “is void and unenforceable as against the public policy of Colorado.”

“Further, the duration of the Clause is greater than necessary to protect any purported legitimate interests and is thus unreasonable and unenforceable,” the countersuit reads. “The Clause is also not reasonable in geographic scope and is also unenforceable for this reason.”

In its lawsuit, Newmark asked the court to issue a preliminary injunction stating that the brokers could not work for CBRE while the case was pending. But a New York judge declined to do so on Friday, instead saying only that they had to “refrain from disparaging” Newmark.

Hunt declined to comment. Newmark, which didn’t respond to a request for comment, is represented by attorneys with Cantor Fitzgerald. The three brokers are represented by Matthew Clark and Isaac Smith of Faegre Drinker Biddle & Reath.

Terrance Hunt, Shane Ozment and Chris Cowan were sued in New York. Then they countersued in Denver.