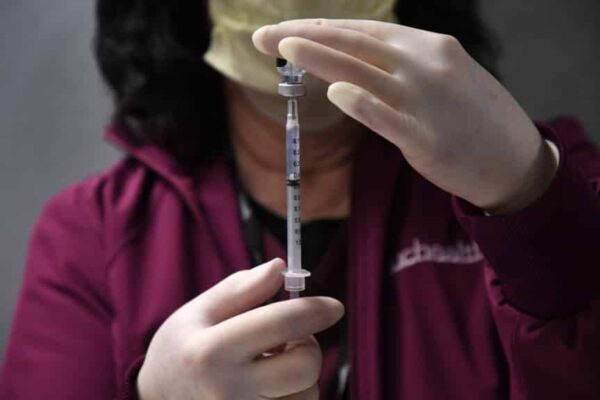 Denver plans to give $400 bonuses to city employees who have taken the COVID vaccine or have exemptions. The City Council is expected to approve or reject the bonuses next week. (BusinessDen file)

Mayor Michael Hancock’s plan to give $400 bonuses to city employees appears poised to be approved by the Denver City Council next week, although not all members are in favor.

The council voted 8-4 to advance the measure on its first reading Monday night. Next week will be when the council ultimately approves or rejects the proposal, which Hancock unveiled last month.

“Our city doesn’t have unlimited funds, and I believe the taxpayers would think this could be better invested in our community,” Sawyer said. “As grateful as I am to our staff, I find it difficult to allocate money to bonuses when there are so many outstanding projects that need to be funded in our city.”

Councilman Paul Kashmann said all departments across the city have a shortage of workers and they are competing against the private sector, so the city should pay workers for their vaccination compliance.

“We’re in a real world where we’ve got to stop the bleeding,” Kashmann said. “We’ve got to compete with industries that will offer our people more money than we can offer them. I’m willing to offer this ‘thank you’ to our employees. I wish it could be more.”

The bonus payments will cost $5.7 million in city funds, assuming there was 100 percent compliance, according to city documents.

The $400 bonuses are intended to reward employees for complying with the vaccine mandate for city staff, although employees with an approved religious exemption who didn’t get the shot would also get the money.

The money would be distributed in November and December. Elected officials such as Hancock and the council members would not get a bonus.

Of Denver’s 10,067 employees, 99.1 percent complied with the vaccination mandate or were approved for a religious or medical exemption by the Sept. 30 deadline, according to Hancock’s office. Of 769 employees who applied for an exemption, 76 had their applications denied.

Employees who failed to get vaccinated or an exemption could be terminated. It was unclear whether any employees had been fired for refusing to comply as of Tuesday.

In a separate effort, the Hancock administration is also looking to give employees up to $2,500 if they worked between March and December 2020, when vaccinations were not yet widely available, in situations where they had to be near people.

There are about 4,200 eligible “career services” employees who could receive the payments, which would be $250 for each eligible month.

The $8.8 million needed to fund that would come from federal COVID relief funding.

That measure will also be voted on next week, although it’s less controversial. The council unanimously advanced the measure on the first read without discussion.

Denver plans to give $400 bonuses to city employees who have taken the COVID vaccine or have exemptions. The City Council is expected to approve or reject the bonuses next week. (BusinessDen file)

“Our city doesn’t have unlimited funds,” said a member about payouts for COVID vaccinations and pandemic service. “I wish it could be more,” said another.