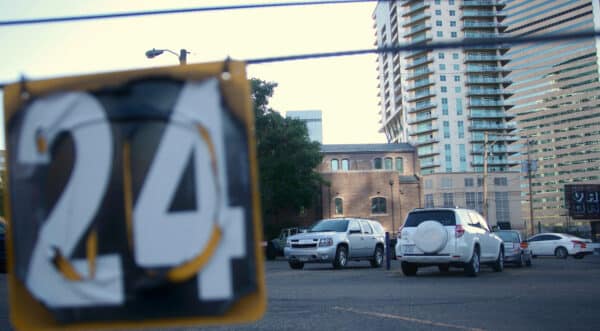 St. Andrew’s Episcopal Church in Five Points wants to use half of its northside parking lot as a safe parking site for homeless people to sleep overnight. Photos by Eric Heinz.

A church at the edge of Five Points and Uptown wants to shift gears in the way it uses its parking lot.

It’s the second known proposal for a safe parking site within Denver city limits. The first opened in July at First Universalist Church of Denver in the University Hills neighborhood.

The site would use the north half of the church’s parking lot at 2071 Glenarm Place, also called the Caledonian lot, according to the church’s website. The maximum would be eight vehicles, with no more than two adults per vehicle. Each occupant would have to be at least 18 years old.

No trailers, recreational vehicles or campers would be allowed, and the site would be fenced and locked. There would also be a portable bathroom, a hand-sanitizing station and trash bins.

The Uptown on the Hill neighborhood organization endorsed the plans for the safe parking site in August, and a good neighbor agreement will need to be completed before a site could open, according to the church’s website. The congregation is working with the nonprofit Colorado Safe Parking Initiative on the site.

Chelsey Baker-Hauck, one of the founders and a board member of CSPI, stressed that the plans are not finalized.

“We’ve been in conversation with them for a while, but there’s nothing concrete at this time,” Baker-Hauck said. “They have pending meetings with neighbors, and there’s a lot of work that needs to happen before this is greenlit. It’s still in the very exploratory phase.”

The church estimated the cost to run the site for six months at about $15,000, assuming the city of Denver does not cover any expenses.

The church posted on its website that it has been focused on trying to aid homeless people for the last 10 years, and eventually wants to build a permanent structure for transitional housing on the parking lot.

“St. Andrew’s has dedicated prayer, time and energy to the process of discerning a way to act for and with our homeless neighbors,” the church’s website reads. “Most of our efforts have been devoted to the attempt to give concrete expression to our mission—offering sanctuary in the city, growing in God’s love, seeking the renewal of the world—by developing a residence on the land we currently use for parking.”

Several years ago, St. Andrew’s tried to put a temporary collection of tiny homes on the lot to house the homeless. But the lot is within a historic district, and Denver’s Landmark Preservation Commission ultimately rejected the proposal.

On Thursday, the berms adjacent to the parking lot and around the church were fenced off. In some places, large rocks were inside them, a practice used by property owners to deter homeless encampments from cropping up.

The church said on its website that it would contract with a service provider to inspect visitors and help them move into a “sheltered living situation.” The church said it has spoken with the St. Francis Center and Volunteers of America regarding such services.