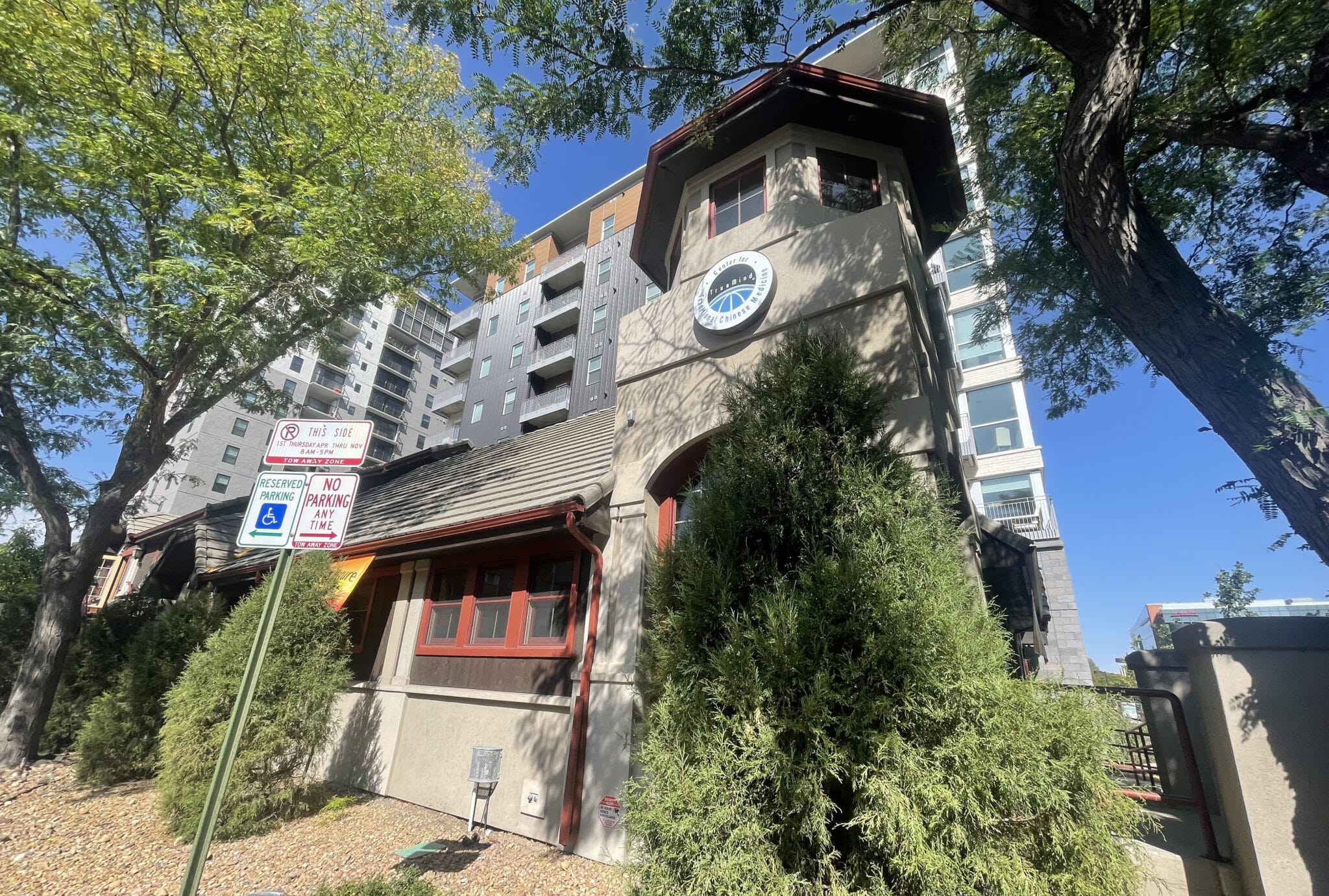 The owners of TrueMind Center for Traditional Chinese Medicine in Cherry Creek plan to redevelop the site as a residential building with ground-floor retail. (Eric Heinz photo)

After 18 years of business in the Cherry Creek neighborhood, the owners of a traditional Chinese medicine center are looking to redevelop its real estate.

TrueMind owners John Law and Hongfei Lin have applied for a rezoning of their 6,262-square-foot lot at 5 Cook St. They ultimately want to construct a building, no more than seven stories, with one floor of retail and residences above.

“We haven’t made a decision, whether it will be apartments or condos,” said Canyon Law, the son of the owners, who works in real estate. “We’re open to both, but we’re leaning toward apartments.”

Canyon said the Law family intends to make some of the units income-restricted to avoid paying the city’s fee for developments that lack such housing. He said the family is looking to partner with investors on the project.

According to a good neighbor agreement between the owners and the Cherry Creek East Association, the Law family must ensure the parking for the building is secured by long-term leases before they apply for a building permit, in addition to keeping the building at most seven stories tall.

TrueMind owners John Law and Hongfei Lin have applied for a rezoning of their 6,262-square-foot lot at 5 Cook St. (Courtesy of TrueMind)

“We would love to continue to be part of the neighborhood, and we understand the neighborhood quite well and we’re interested in keeping (the land) in the family,” Canyon said. “(The building) is just something that fits the neighborhood. We want it to be executed with high quality.”

TrueMind opened in 2003, and the current building has been there since 1971, first used as a residence and converted to a commercial property in 1979, according to city records. A salon and spa under different ownership occupies an attachment to the main building, which would also be demolished.

Although plans for the building have not yet been filed with the city, Canyon said he estimates the number of units would be in the “mid-30s.” The reason for the redevelopment is that Hongfei, the lead acupuncturist, is retiring, he said.

Mostly multi-unit residential and office buildings surround the location, with some retail along 1st Avenue. The Cherry Creek Shopping Center is located a block and a half to the west on Steele Street.

Canyon said it is too early to tell when construction may begin, as the family is focused on getting the zoning approved by the City Council, which is scheduled to vote on it Oct. 25.

It’s not the only rezoning proposed for that part of town. About two blocks to the west, the owner of a 10-story office building has asked the city to rezone the property so it can redevelop the site for residential use.

The owners of TrueMind Center for Traditional Chinese Medicine in Cherry Creek plan to redevelop the site as a residential building with ground-floor retail. (Eric Heinz photo)