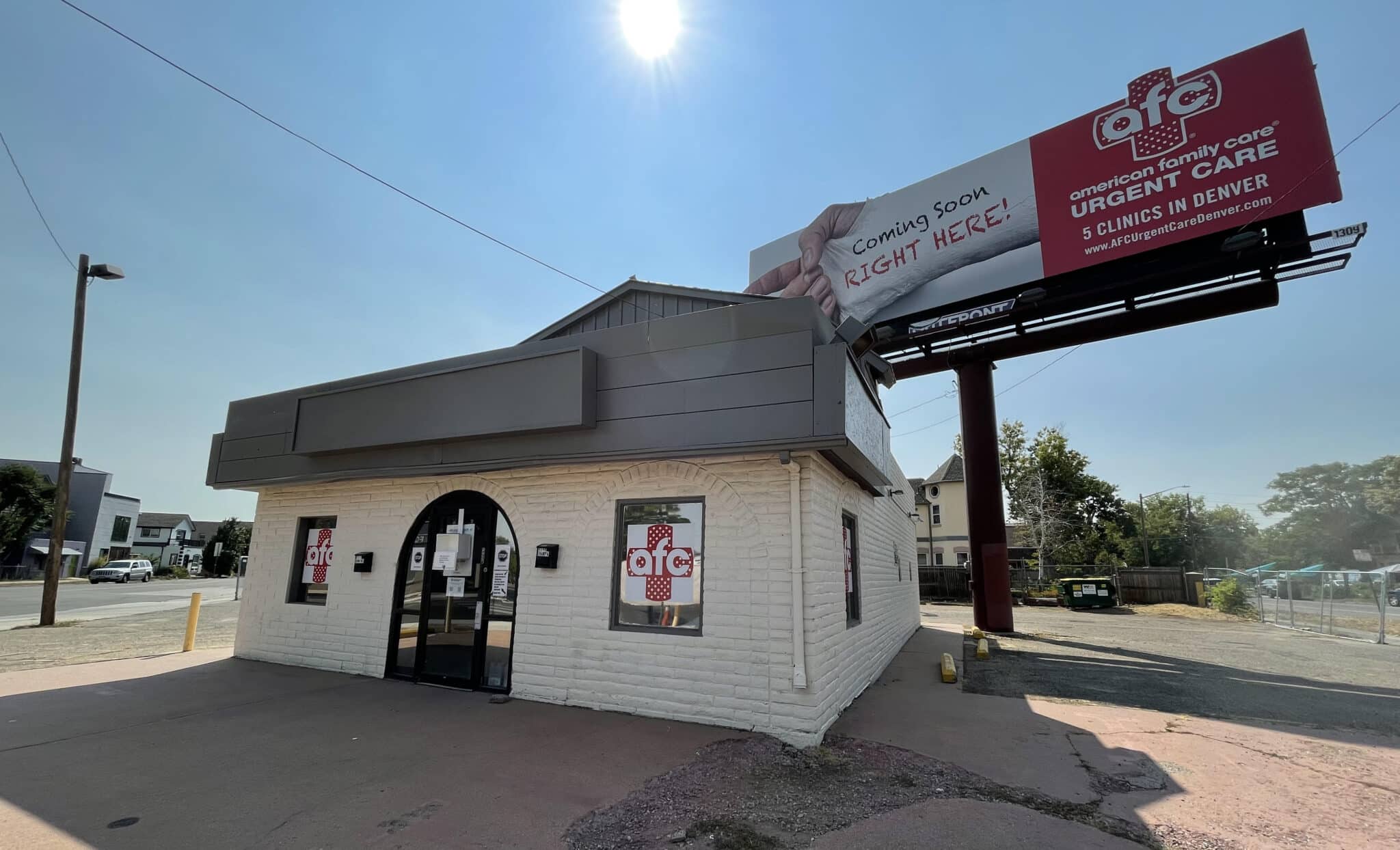 AFC Urgent Care is preparing to demolish this building at 3248 Champa St. and build a 3,600-square-foot clinic on the site, which it purchased in early 2020. (Eric Heinz photo)

A local chain of urgent care clinics hopes to have a new Five Points location up and running by mid next summer.

It would replace the existing 1,100-square-foot structure at the site, which was built in the 1960s.

Kerman Investments LLC, an entity affiliated with the company, paid $1.05 million for the 0.22-acre property in January 2020. It’s within the Curtis Park Historic District.

At the time of the sale, the building was vacant, having most recently been used by a check-cashing store. In recent months, AFC has been using the property as a COVID-19 and antibody testing site.

AFC CEO Darius Kerman said the new facility is planned to have six exam rooms and a medical procedure room, with the capacity to see 60 to 80 patients a day. Kerman said he chose the location in Five Points because the neighborhood lacked an urgent care facility.

“The reason why we decided to go through the pain of building a structure in the landmark district is because there’s a need in that area,” Kerman said. “There’s barely any retail. There is no medical care provider. There’s a very limited number of facilities.”

Kerman said he expects AFC’s building permits will be approved by February or March at the latest, with construction starting “right away.” The facility could be operational by July.

There are health clinics near the AFC Five Points location, but as far as outpatient urgent care, there is not another facility within walking distance, or about 2 miles, Kerman said.

“Easy, accessible and affordable health care facilities are what people want,” Kerman said. “Having an urgent care close by is the same (necessity) as a grocery store or like a dentist. It just makes life easier. You don’t have to travel through the city to get to the place.”

AFC had some difficulty getting past the Landmark Preservation Commission in the beginning of its design phase because of how the windows were planned, Kerman said. However, the urgent care provider’s new design proposal was approved by the commission Tuesday.

Because the structure needed to have windows that were transparent and visible from the frontage on Downing, AFC had to redesign its patient rooms to the backside facing the west parking lot to ensure visitor privacy.

There are eight other AFC clinics in the Denver metro area, but the locations at West Colfax, Aurora and University Hills are also only offering COVID-19 and antibody testing at this time, according to the company website. .

AFC Urgent Care is preparing to demolish this building at 3248 Champa St. and build a 3,600-square-foot clinic on the site, which it purchased in early 2020. (Eric Heinz photo)