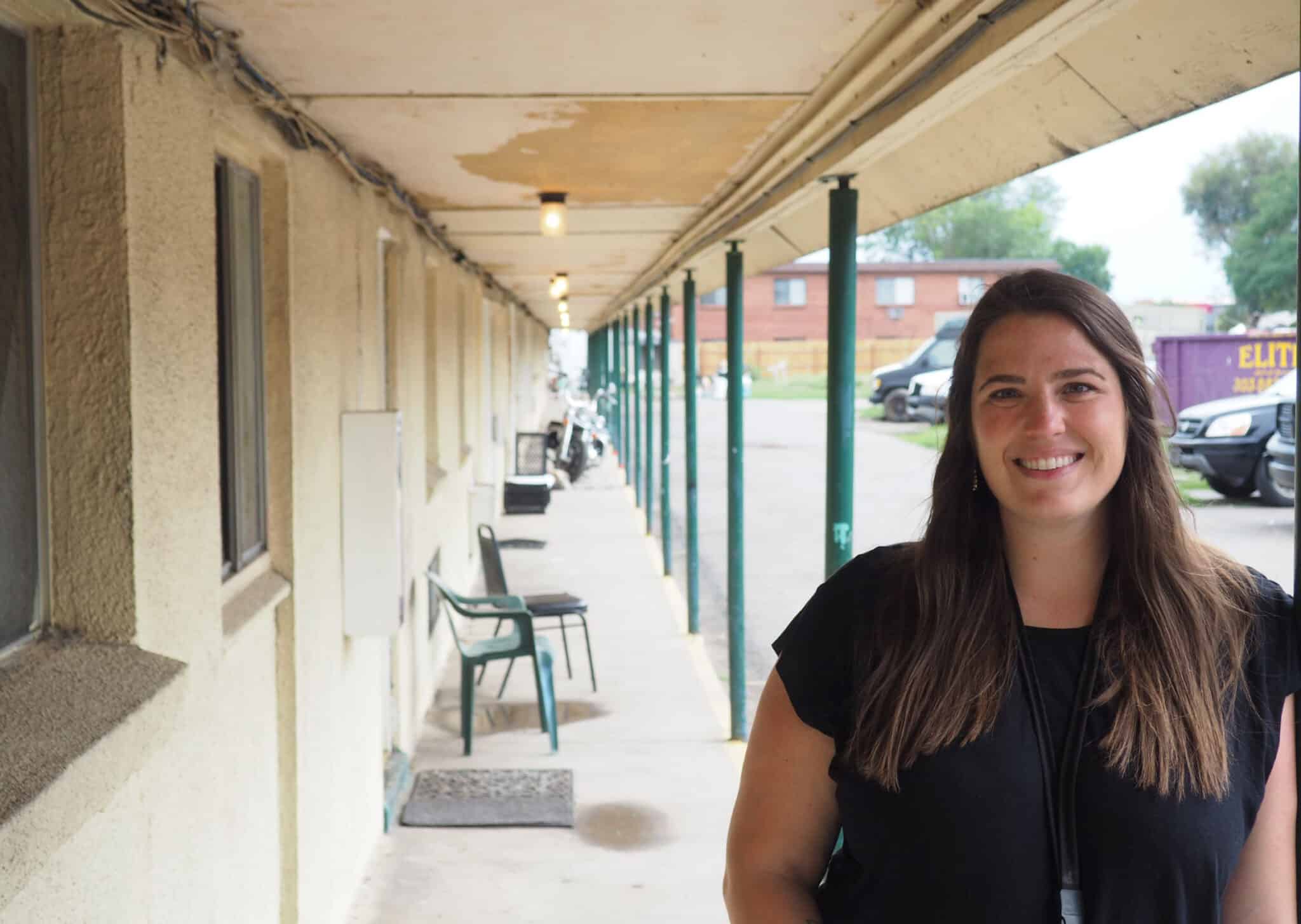 Lauren Coleman, founder of The Sursy, is fixing up the White Swan Motel after buying it. (Thomas Gounley photos)

Lauren Coleman’s original plan for a lot along Colfax Avenue in Lakewood was to demolish the old motel there and build a new “shoppable” one.

If guests liked the sheets or the mattress or the art on the wall, they could hop into the app used to check in and buy them. She planned to price units, some with multiple bedrooms, upward of $300 a night.

Then the pandemic hit, and Coleman couldn’t get financing for her hospitality project.

So now, instead of building something new, Coleman is just fixing up the “very run down” White Swan Motel at 6060 W. Colfax Ave. and targeting “the opposite end of the spectrum” — the homeless.

“It’s a massive pivot, but it’s what’s needed to get done,” she said.

The 31-year-old Coleman (previously Lauren Richardson; she recently got married) is founder and managing director of The Sursy, a local startup with three focuses: interior design, retail and hospitality.

The company got its start managing a shoppable Airbnb in Lincoln Park — “the literal paint on the wall is for sale,” she told BusinessDen in 2019 — and has since added two others.

But Coleman said her plan from the start was to have her own hotel. Specifically, she wanted to redevelop the White Swan site, which is in Lakewood’s 40 West Arts District. Coleman sits on the board of the West Colfax Community Association, which works with the district.

“I’ve been after this property for a number of years,” she said.

Coleman said she was under contract for the property and was working on plans for a 25-to-35-unit hotel topping out at three stories when the pandemic set in.

“Banks put a moratorium on anything hospitality,” she said.

Coleman was in a particularly challenging position. The project was to be her first development, so she didn’t have a track record.

But she was still bullish on the property, and figured the land would only get more expensive.

Banks needed to see some proof of income if she was going to buy it, she said. So Coleman zeroed in on keeping the existing buildings, and providing stays to the homeless. She said that made lenders classify the project as “community revitalization” instead of hospitality. 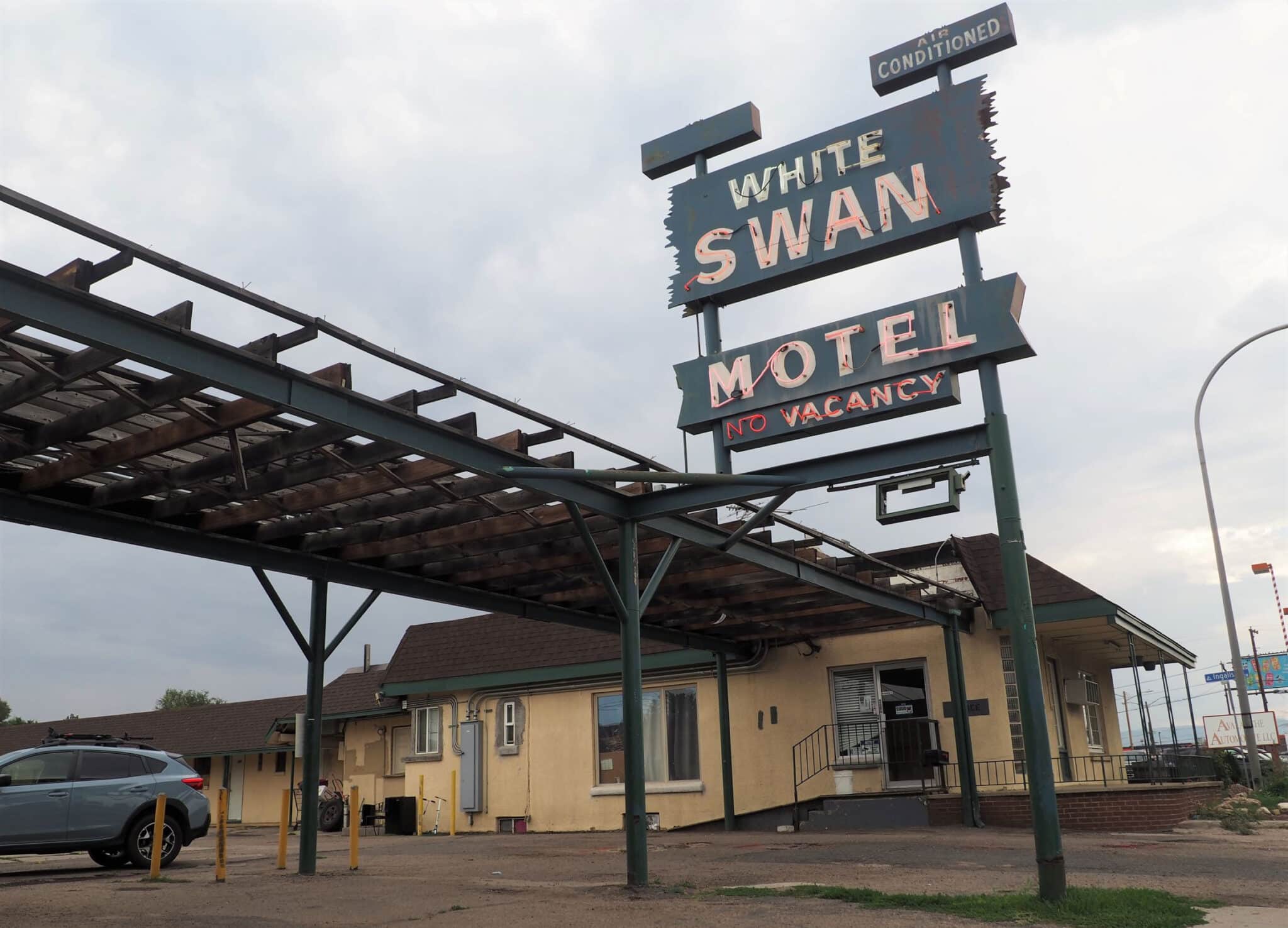 Kelli Barker, regional homeless coordinator with Jefferson County, told BusinessDen the county rents motel rooms for an average of five families on any given night, although that figure can jump during severe weather. And the need has increased during the pandemic, she said.

“We’ve been doing this well before the pandemic, because we don’t have any family shelters or really any dedicated homeless shelters in Jefferson County,” Barker said. “So this kind of serves as our shelter system currently.”

Barker said the county currently works primarily with three or four hotels. It used to place individuals at the White Swan, she said, but stopped.

“The condition of the White Swan has deteriorated over the past couple years,” she said.

Although there’s no formal agreement in place, Jefferson County is interested in renting rooms at the White Swan when it’s fixed up. In a letter to Coleman in early August, the county said it was willing to pay $82.50 per unit per night, and $520 and $1,980 per week or month, respectively.

Coleman said she’s also talking with the city of Lakewood and the regional Severe Weather Shelter Network about also renting rooms to them for transitional housing.

With informal commitments in place, Coleman purchased the 24-unit White Swan property in August, paying $2.48 million. She got a loan from FirstBank for about half that, and said she also raised $1.8 million from private investors. A small grant from the city of Lakewood helped partially cover closing costs.

As of Thursday, eight units were being rented to individuals who had been staying there since before the sale. But the units were in rough shape.

“Some of these rooms, the water and heat didn’t work,” Coleman said. “And people were paying to stay in there.”

Coleman said she expects to spend $100,000 on repairs. That includes all new doors and floors, repainting the units, replacing all furniture and adding new security cameras.

“I’m not turning it into a Marriott, but I’m going to make it cleaner and safer than it was before,” she said.

Lakewood Mayor Adam Paul, who swung by the property Thursday afternoon, expressed interest in Coleman’s original vision, saying “there’s some momentum” along the Colfax corridor. But he also said just making the motel “clean and safe” will be “a meaningful addition” to the area.

“It’s kind of karmatic,” Paul said of Coleman’s change in plans. “I think the reward will be even greater.”

Coleman hasn’t abandoned her original hopes. She still wants to build a new hotel, and said in her talks with various agencies that “I’ve been very transparent the whole time that I intend to redevelop.”

She thinks that could potentially happen in three to five years.

“I want the land at least, and it’s a step in the right direction,” Coleman said. “It’s just a weird way to get there.”

Lauren Coleman, founder of The Sursy, is fixing up the White Swan Motel after buying it. (Thomas Gounley photos)

Lauren Coleman wants to build a new hotel on Colfax Avenue with units that go for $300 a night. But for now, she’s housing the otherwise homeless.