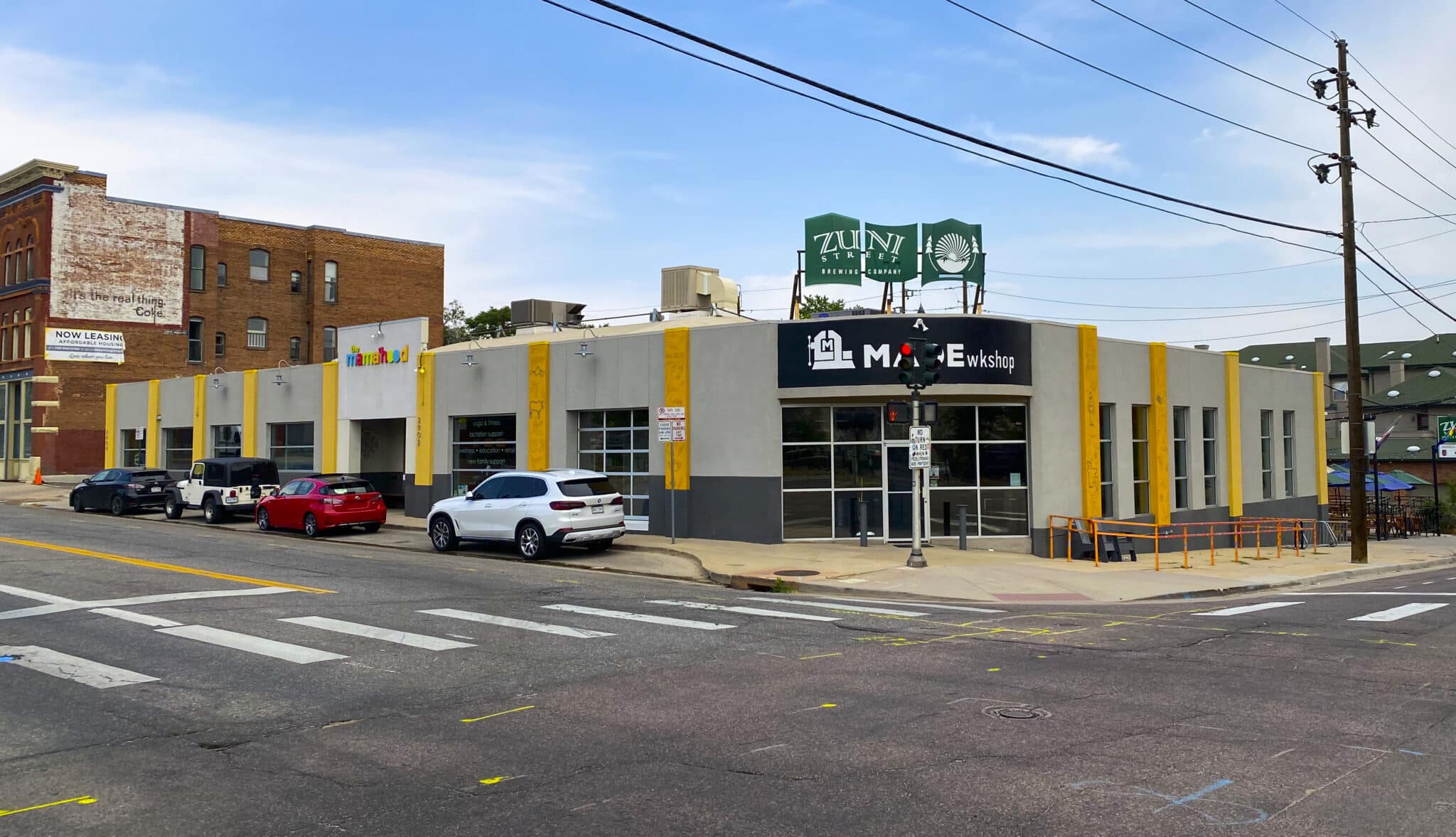 The 2,600-square-foot space was previously home to MADEwkshp briefly and Teatulia before that. (Photos courtesy of Shames Makovsky)

The corner of West 29th Avenue and Zuni Street has seen two businesses close since December.

“We want somebody who fosters a sense of community and lends themselves to what the neighborhood is and what it could be,” said Adam Lipsius, co-owner of the property.

Connor Donahue with Shames Makovsky is marketing the space for lease.

Lipsius and his wife Linda Appel Lipsius purchased the 28,750-square-foot building under the entity MEAL LLC in 2010 for around $1.5 million, according to property records.

The building is currently home to Zuni Street Brewing Co. and The Mama’hood, which Linda co-founded and offers classes and products for new moms.

From 2012 to December 2020, the space housed a tea bar for Linda’s other company Teatulia, which she co-founded in 2006. Linda got her entrepreneurial spirit from her father, Max Appel, who founded Orange Glo International, the company behind Oxiclean, Kaboom and Orange Glo Wood Cleaner and Polish. (Max and her brother Joel are also part-owners of the revived Zaidy’s Deli.)

“It became hard to generate traffic,” Lipsius said. “We tried branching out into grocery but there just wasn’t enough volume.”

Teatulia’s tea, which is sourced from their own 3,000-acre tea garden in the Teatulia region of Northern Bangladesh, can still be purchased in local retailers, such as Whole Foods, King Soopers, Locavore, Natural Grocers, and online.

Linda has since stepped down as CEO, but still serves on the board, according to Lipsius.

After Teatulia closed, the space currently available for lease was briefly home to MADEwkshp, which offered woodworking and welding classes. But that business closed in March following a Chapter 7 bankruptcy filing and a lawsuit from its previous landlord in RiNo.

The 2,600-square-foot space was previously home to MADEwkshp briefly and Teatulia before that. (Photos courtesy of Shames Makovsky)

The 2,600 square feet at 2900 Zuni St. was briefly home to MADEwkshp after the tea bar closed late last year and is available for lease.