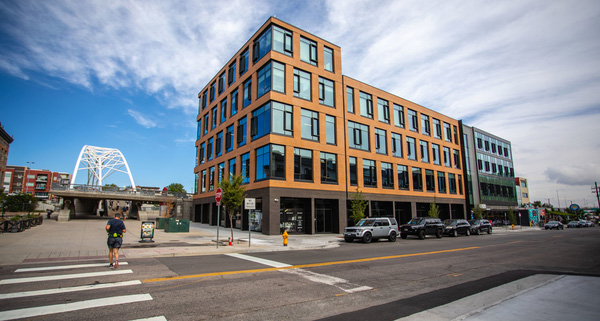 The Circa office building at 1615 Platte St. sold for $60 million. (BusinessDen file)

Boston-based Beacon Capital Partners has added to its holdings in Denver.

The real estate firm purchased the Circa office building at 1615 Platte St. this week for $60 million, according to public records.

The building is 96,000 square feet, according to its website, which makes the deal worth $625 per square foot. It is four stories, although a mezzanine level makes it appear five stories on one end.

Circa was developed by Seattle-based Unico Properties and Denver-based Confluent Development. The building is one of 27 that Unico said in 2019 that it had sold to Broad Street Principal Investments LLC, an affiliate of Goldman Sachs, for $710 million. But Unico said it maintained a stake in the portfolio and would continue to manage the properties on behalf of the partnership.

Circa’s office tenants include Xero and WeWork. Ground-floor retail tenants include Blue Sparrow Coffee, Room for Milly cocktail bar and restaurant chain Dave’s Hot Chicken, which has yet to open.

The Circa office building at 1615 Platte St. sold for $60 million. (BusinessDen file)

The Boston-based real estate firm paid $625 per square foot for the four-story, 96,000-square-foot building, which houses Xero and WeWork.