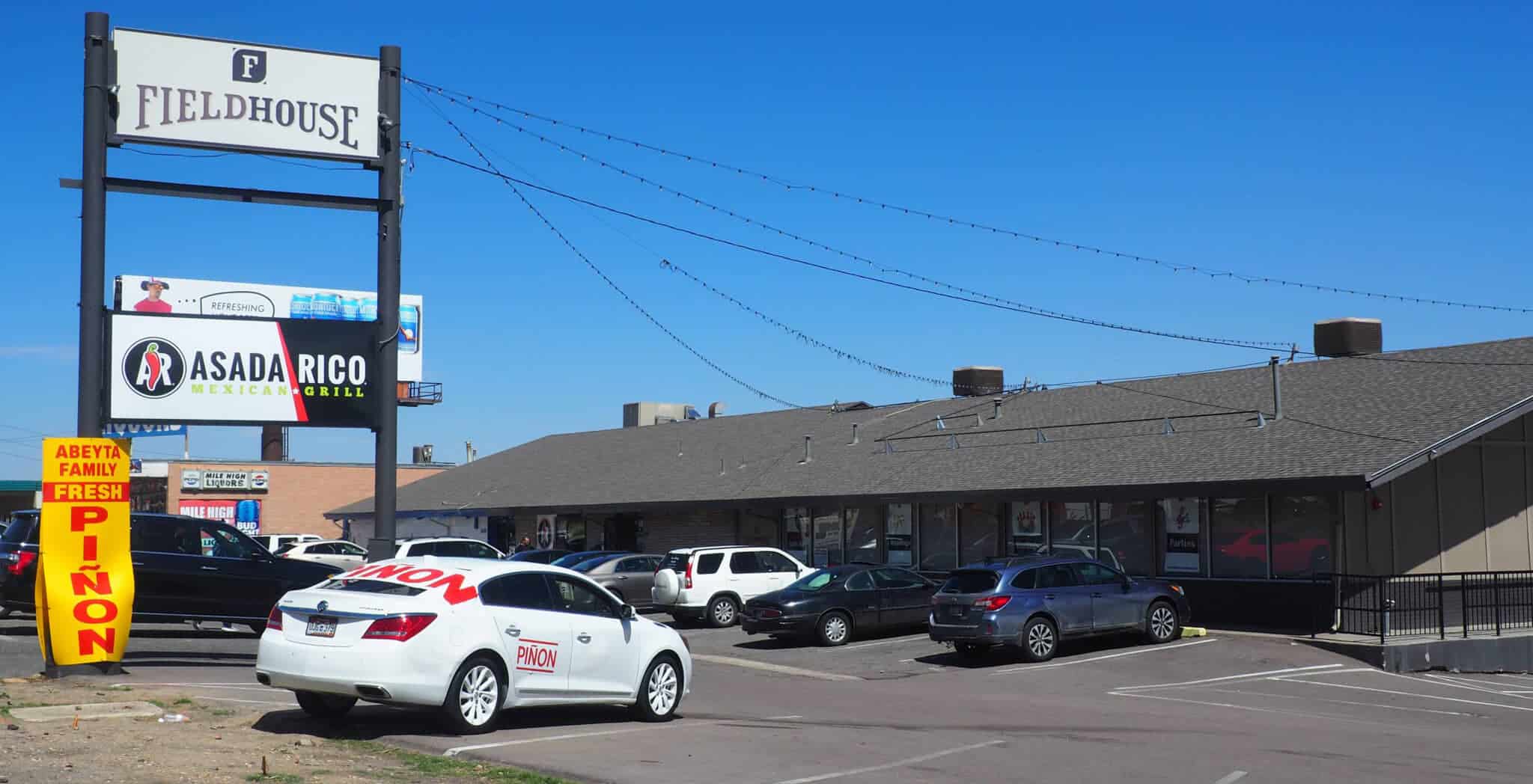 The litigation revolves around the Lit Cannabis dispensary in this building at 1630 Federal Blvd. in Denver. (BusinessDen file)

A marijuana turf battle near Mile High is back in court.

Mile High Medical Cannabis recently filed a lawsuit defending its Federal Boulevard lease against a competitor, on top of a pending contract complaint with its sublandlord.

According to the lawsuit filed on May 11 in Denver District Court, PG Retail and parent company Pure Greens filed a permit application to change ownership of the dispensary at 1630 Federal Blvd., where Mile High Medical Cannabis currently operates Lit Cannabis.

The Federal Boulevard property owned by Gibraltar Realty Co. has been leased to JDL Federal and subleased to Mile High Medical Cannabis since 2015.

The change of use permit, according to the lawsuit, is the latest act of “tortious interference” committed against Mile High Medical Cannabis in an attempted backdoor eviction.

Per the complaint, Pure Greens allegedly conspired with Mile High Medical Cannabis’ sublandlords, Lisa Vedovelli and David Benlolo, who own JDL Federal and the Fieldhouse venue next door.

“Defendants (Pure Greens) have or are attempting to conspire with the sub-landlord and/or the owner in an attempt to force plaintiff (Mile High Medical Cannabis) out of its sublease in order to extract higher rents from defendants as a new tenant in the cannabis industry,” the May lawsuit contends.

Mile High Medical Cannabis sued JDL Federal in January 2020 over a rent hike. The original 2015 lease set the rent at $5,000 a month with five parking spots for an additional $375. After 18 months, the rent increased to $6,500 in accordance with a 1.5 percent escalation built into the master lease. Per an appraisal, Mile High Medical Cannabis expected the rent to rise into the ballpark of $7,029 come January 2020.

“Defendant (JDL Federal) thereafter engaged in pattern of conduct in an attempt to create a false sense of pressure and an illusion that if Mile High Medical Cannabis did not agree to accept a 407 percent increase in rent, that it would lose its lease and consequently its license to sell cannabis with the Medical Enforcement Division (MED) and the City and County of Denver Department of Excise and Licenses,” claimed the January 2020 lawsuit.

Mile High Medical Cannabis has three five-year options on the lease, the second of which went into effect Jan. 1, 2020.

Founded in November 2009, Mile High Medical Cannabis previously owned the TRU Cannabis chain. The company currently runs two dispensaries under the name Lit, one on Federal and another on South Broadway.

JDL Federal filed for chapter 11 bankruptcy in March, a move which could also invalidate Mile High Medical Cannabis’ lease as a holdover tenant.

Between the bankruptcy proceedings and the fraudulent permit application, Mile High Medical Cannabis said the defendants have tried to “harm MHMC’s reputation and good will amongst actual and prospective customers, potential employees and actual employees, and amongst state regulators at the Colorado Marijuana Enforcement Division and with the City and County of Denver Department of Excise and Licensing.”

A spokesperson for the Marijuana Enforcement Division clarified that a permit application will be denied if filed for a location already occupied by a dispensary. A history of fraud or negative licensing can also be ground for future denials.

In its May 2021 lawsuit, Mile High Medical Cannabis asks the court to award damages and attorneys’ fees.

Senior Retail Manager for Pure Greens LLC Jeffrey Sozio did not respond to inquiries for comment.

Mile High Medical Cannabis is represented by Lone Tree attorney Scott McLeod of Memkov Brunger McLeod. McLeod did not respond to inquiries for comment, nor did management for Lit Cannabis.

The litigation revolves around the Lit Cannabis dispensary in this building at 1630 Federal Blvd. in Denver. (BusinessDen file)

Mile High Medical Cannabis filed a suit defending its lease against a competitor, claiming it conspired with the sublandlords it is already suing over a rent hike.