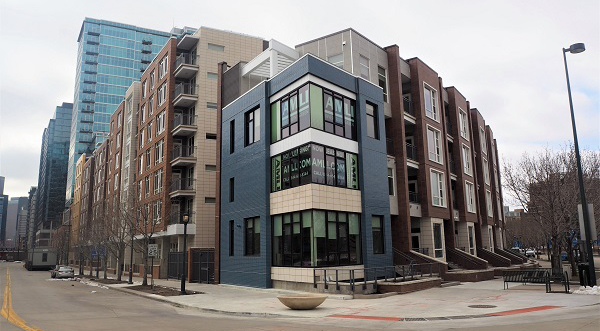 A bill awaiting the governor’s signature would allow Denver and other cities to mandate that income-restricted housing be included in new developments. (BusinessDen file)

Denver is close to being legally able to mandate that income-restricted housing be included in new developments.

House Bill 1117 is on the governor’s desk, awaiting signature. Once signed, it will allow municipalities in Colorado to require a percentage of new residential development be designated as so-called “affordable” housing.

The specific percentage and income restrictions required, however, remain up to the individual municipalities.

“As we move into policy considerations, Denver is contemplating this program as far as the level of AMI (Annual Median Income), percentage of units that are affordable and alternative compliance options,” said Analiese Hock, a principal city planner in Denver’s Community Planning and Development department.

Hock is one of several employees tasked with determining how exactly the city responds to this new power.

“We’ve been working on this for a long time, thinking through various options of what a more robust program could look like if the bill fails and if it passes,” she said. “Given where it is now, our efforts have been focused more on what it looks like if it passes.”

Hock said the next trigger point in the process is the expected mid-July rollout of a financial feasibility study for the program.

“First is getting the word out,” she said. “Getting an understanding that this is a tool for cities and counties across the state, including Denver. And it’s getting feedback from development and folks in the industry, knowing priorities and also concerns.”

“We know our housing needs continue to grow, and we want to move swiftly. But we want to make sure we’re having a thoughtful and collaborative process,” Hock said.

Hock noted that two small but significant changes were made to the state bill since its original drafting, but neither have significant impacts on Denver.

One, she explained, was a clarification that rent control was not being made legal through this act. Denver, Hock said, is not pursuing rent control. The other change was a series of guard rails put on the powers that require municipalities to have a demonstrated strong commitment to affordable housing outside of this new power. Denver qualifies for that easily, Hock said.

Now, development and housing advocates must wait — and, surely, lobby — to see how the city, including a very aggressively pro-affordable housing City Council, responds.

“This is a program that seeks to partner with market-rate development, work within their existing business models,” Hock said. “The financial feasibility analysis is really important to make sure we’re increasing the overall supply of housing, not just affordable housing. That isn’t wrapped up, and we’re still conducting stakeholder outreach. That will all serve as certain guardrails.”

Hock didn’t want to throw numbers out publicly yet, but she did make an important caveat.

“We’re not looking to become Boulder,” she said. “They have extremely high requirements and fees. It’s a great program for their community, but folks worried about where our numbers are going to land — it’s not going to be Boulder.”

A bill awaiting the governor’s signature would allow Denver and other cities to mandate that income-restricted housing be included in new developments. (BusinessDen file)

“We’re not looking to become Boulder,” said a city planner of the law, which leaves the specific percentage and income restrictions required up to each municipality.