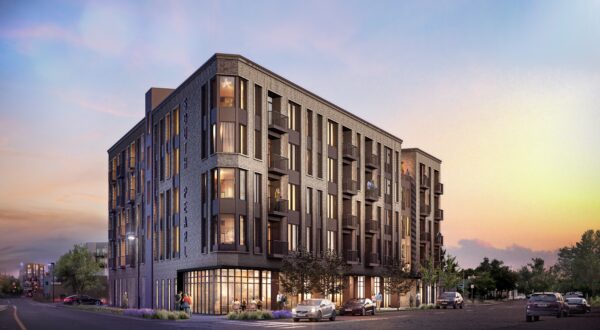 Narrate will soon be breaking ground on a five-story, 73-unit apartment complex at 1230 S. Pearl St. in Platt Park. (Courtesy of Narrate)

A new local development firm’s first project is about to break ground at the edge of Platt Park.

Narrate, led by Adam Fenton, expects to begin work May 17 on a five-story, 73-unit apartment building at 1230 S. Pearl St. and be finished in 15 months.

Fenton purchased the 0.43-acre site for $3.9 million in November 2019. It was previously home to an auto repair shop called Buchtel Motors and a pair of single-family homes. Those structures were recently demolished.

“I think we’ve designed a project here that the neighborhood will be very proud of,” Fenton said Wednesday. “I think it’s something that lines up with modernness but also a very historic feel. It’s an 80 percent brick building, 10 percent windows and 10 percent metal panels. We spent a lot of time with Oz, the architect, on the project to design what we feel is a building that will stand the test of time.”

Shaw Construction will be the general contractor on the 60,000-square-foot project.

The second through fifth stories will be residential, Fenton said, with primarily one-bedroom units mixed with roughly 10 two-bedroom apartments. The site will feature 56 below-grade parking spaces.

“We spent a lot of time on interior design,” Fenton said.

The ground floor will have two retail units. One, which Fenton anticipates will be leased to a restaurant, is about 3,400 square feet, he said. The other is roughly 1,600 square feet. No tenants have been lined up yet.

Fenton worked locally for Washington-based multifamily developer Holland Residential from 2011 to 2015, and for Denver-based developer BMC Investments from 2015 until he founded Narrate.

“Our M.O. is these specialty locations and this kind of high-end experience, as compared to the big bombers,” he said.

Narrate will soon be breaking ground on a five-story, 73-unit apartment complex at 1230 S. Pearl St. in Platt Park. (Courtesy of Narrate)

The auto repair shop and single-family homes previously on the 0.43-acre site at 1230 S. Pearl St. were demolished.