The Mark Twain Building in Poets Row at 1035 Sherman St. is one of Denver’s thousands of rental properties that would be impacted by a proposal to require rental licenses from the city. (Courtesy of Newmark Knight Frank)

The next hurdle to clear for a sweeping Denver rental housing licensing policy proposal is how, exactly, the fees will be assessed.

City Council President Stacie Gilmore’s plan to require rental properties to be licensed by the city was heard by the full City Council for the first time Monday night. Councilwoman Candi CdeBaca immediately suggested amending it.

The program, which Gilmore estimates would involve around 50,000 licensees, would instantly become the largest licensing program in Denver’s history. The program would require landlords to pay for an inspection in order to get a license, which would be good for four years. 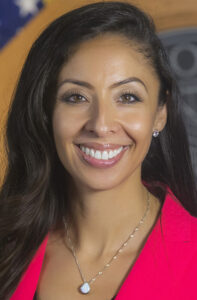 “The thing I’m trying to eliminate is the fee scale that privileges corporate landlords,” CdeBaca said. “When we make mom and pop landlords pay $50 but corporate maxes out at $500, no matter how many units on their parcel, that’s inequitable. We’re harming the people least equipped to do the work of compliance.”

CdeBaca proposed making the fee $50 per unit, meaning an owner of a 200-unit apartment complex would pay $10,000 to license their property.

Gilmore said the size of the fee proposed was tailored to minimize the impact on renters.

“We purposely wanted to keep tiering of licenses in a certain way because we knew folks residing in multi-unit, larger apartment complexes were more vulnerable than folks renting a single-family home,” Gilmore said. “We purposely kept it low so it’d be pennies on the dollar that potentially could be passed through to the renter.”

Councilwoman Robin Kniech also defended Gilmore’s model, saying that the amount of the fee has to correlate to a degree with the amount of work involved in licensing a property, and a larger structure doesn’t necessarily mean more work.

She also pointed out the fee is paid once every four years. That means the cost of the license plus that of the required inspection — estimated by Gilmore at about $150 — to even a landlord of a single unit would be about $4 per month.

“To say someone’s losing housing over $4 a month, either someone’s jacking the rent up way over the actual cost or I question the reality of that,” Kniech said.

CdeBaca’s amendment will be heard and voted on at next Monday’s meeting.

The Mark Twain Building in Poets Row at 1035 Sherman St. is one of Denver’s thousands of rental properties that would be impacted by a proposal to require rental licenses from the city. (Courtesy of Newmark Knight Frank)

Landlords would also be required to pay for inspections to get a license, which would be good for four years. Council members disagree over how to assess the fees.

This entire scheme is a debacle. It creates delays and expense for no good reason.