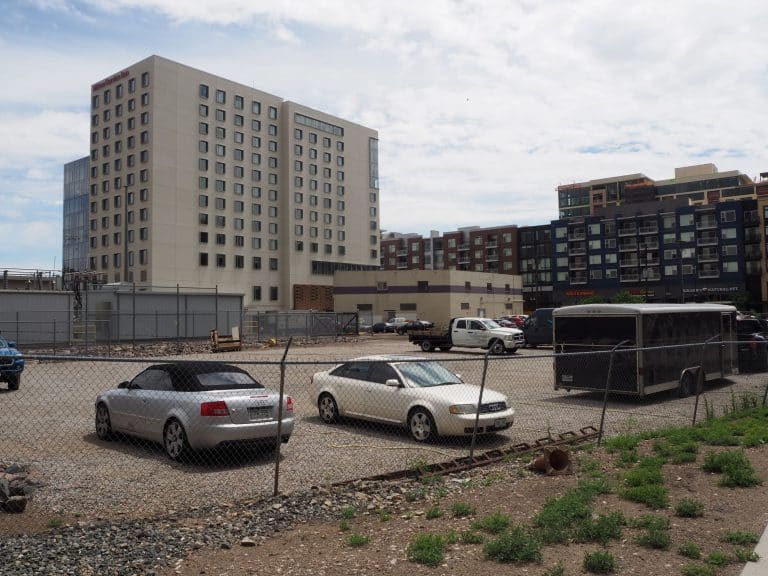 A 2019 photo of the lot, which has already been approved for a 13-story, 198-unit apartment building. (BusinessDen file)

A site near Union Station where an apartment building is planned has sold.

The lot was sold by Denver-based Pando Holdings, which paid $6.25 million for it in June 2019. The company is led by Lance Gutsch and Kiely Wilson.

The big jump in sale price can be attributed to the fact that Greystar purchased more than the land. Pando went through the process of submitting development plans to the city, and the company’s proposal for a 13-story, 198-unit building was approved last fall, records show.

Greystar, which did not respond to a request for comment, will now proceed with constructing that project.

Asked why the company opted to sell, Wilson said in an email that “Pando will look to re-deploy capital from this deal into new investments and is very focused on getting our Colfax + Franklin apartment project under construction.” He said that Greystar is “already big investors in the neighborhood and it fits well with their existing portfolio.”

Greystar last year completed The Pullman, a 13-story apartment building a block from the site that Pando sold.

Nearly all of the units will be studios, some as small as 303 square feet, according to the plans, which were drawn up by Shears Adkins Rockmore Architects. The building is a short walk from the city’s main transit hub, and is slated to have 12 parking spaces for cars and an enclosed area capable of fitting 75 bicycles.

Wilson told BusinessDen in 2019 that he viewed the building as an “evolution” of The Economist, a project Pando completed the previous year at 1578 N. Humboldt St. in City Park West. It features 97 units, 89 of which are studios, and no parking. Pando also completed another small-unit project, Studio 135, at 135 Adams St. in Cherry Creek last year.

Greystar also recently proposed a 17-story complex next to its existing Parq on Speer building in the Golden Triangle.

A 2019 photo of the lot, which has already been approved for a 13-story, 198-unit apartment building. (BusinessDen file)