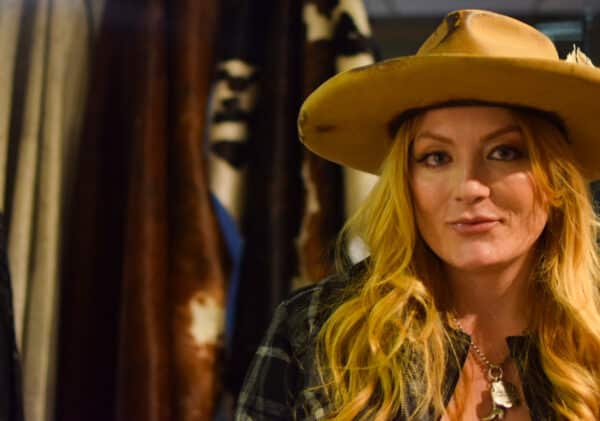 Ashley Jackson, owner of CowboyOutlets.com, in her showroom at the Denver Mart on Thursday. Jackson, her merchandise, as well as her displays and furniture and that of everybody else in the building, must be out by the end of the month. (Cuyler Meade photos)

At 34 years old, Ashley Jackson is one of the younger business owners to call Denver Mart home.

The woman behind CowboyOutlets.com opened her showroom in the sprawling Adams County complex in October.

But Denver Mart opened in 1965, and other tenants have been there for decades. Before she got her own space, Jackson worked for 15 years in sales for other companies in the building.

Now, everyone has to be out by the end of the month.

“I encounter a lot of people crying,” Jackson said. “There’s a sadness about this whole thing.”

Jackson and other tenants were notified by Denver Mart ownership in February that the closure was imminent, and that the complex’s real estate would be sold through the receivership process. The planned buyer is an entity affiliated with Denver-based development firm Westfield, according to court records.

Denver Mart has hosted trade shows for years. But for decades it’s also had tenants — close to 200, according to an online directory — operating wholesale showrooms, where retailers can stop in to decide what to stock on their shelves.

Those tenants have generally operated in a few categories: western wear and accessories, jewelry wholesalers, apparel distributors and outdoor brands, and some national names like Keen and Columbia Sportswear. 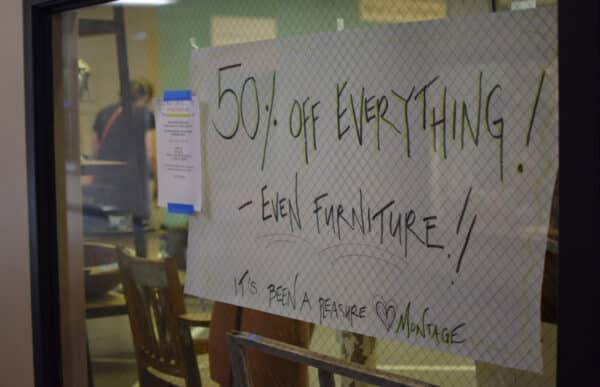 Without anywhere to store their merchandise, much less their furniture and displays, many showrooms are selling their goods at a deep discount before the Denver Mart closes.

“It is the end of an era,” emailed Donna Moore of Terry Moore & Associates, who celebrated 50 years at the Mart last month distributing fashion accessories, gifts and toys. “Our customers from the Rocky Mountain West and surrounding states love our market and the lines and people here, and they are hoping we are able to continue in another location.”

Moore’s hopes were echoed by many. There is talk — some more specific than others — about getting together at a new place or places, maybe in smaller groups, according to interviews with numerous tenants. One outdoor merchandiser said members of his industry are making headway on finding a new space. Western folks expressed hopes for something similar, although plans seemed less concrete.

But the timeframe and sheer physical enormity of each shop’s showrooms — complex displays, furniture, and decor, not to mention the inventory itself — makes any semblance of a smooth transition simply impossible.

“We wish we’d had more time to get out,” said Nancy Schultz of Montage, a decor, handbag and gift merchandiser that’s been in the Mart for 30 years. “You have only one month to get rid of stuff we’ve collected for 30 years. It just wouldn’t be economical, and almost impossible, to store everything and wait and try to find another mart.”

Montage is selling almost everything. With a sad laugh, Schultz said even the hammers were for sale. The business will go on in some capacity with on-the-road salespeople, but it’s hard to imagine exactly what that will look like specifically in the near term.

That sense of uncertainty is perhaps the most common refrain. 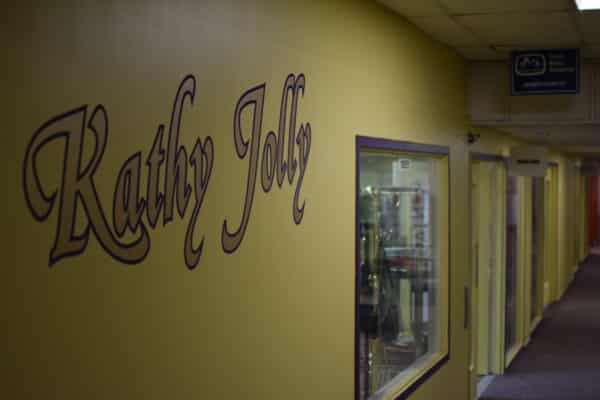 Kathy Jolly’s is owned by a woman of the same name, who’s been in the building since 1980.

“I don’t know,” said Kathy Jolly, owner of an eponymous apparel distributor who’s been in the Mart since 1980, and who some tenants nicknamed the Queen of the Mart. “I have no idea how busy I’ll be. I’m going to work out of my house, but you know, people come in to see somebody else and stop in to see me. It’s been great to work with other people.”

Many businesses, some owners said, will just call it quits. Neil Beaty of Gem Lab, a jewelry appraiser that’s been in the Mart 31 years, isn’t one of them. But he sees it happening for lots of the long-timers.

“It’s a sad story that affects hundreds and hundreds of people, and no one seems to care,” Beaty wrote in an email. “The end of the shows, and this is almost certainly the end of the shows, is many hundreds more. There, like me, quite a few decidedly old businesses in here. There are no other buildings like it, so we have to adapt or retire. It’s been very much a family where the reps all know each other and look out for each other. Many will collapse over this.”

One proprietor who signed his first lease in 1975 admitted this might be the end for him.

“The Mart’s closing threatens the continuity of my business,” emailed Bob Goodshaw of Off Price Resources, an outerwear merchandiser. “The Mart has been my business home for 46 years, and this may quite possibly shut me down.”

The loss is to more than the individuals who run and work in these shops, many pointed out. It’s also to those retailers, most of which are small, mom-and-pop-type businesses, that won’t be able to come to a single location to examine the brands and products they choose to market to their retail customers. 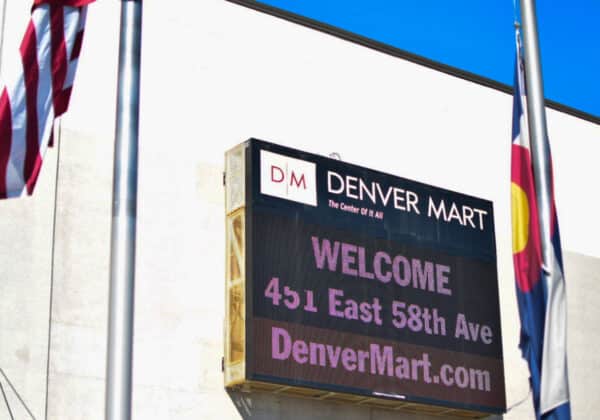 The Denver Mart sign on 58th Avenue in north Denver. The facility will close after 56 years.

“We won’t have a showroom space so that our customers can touch and feel whole product lines,” wrote Sande Womack of New Era Sales Team, which has been in the Mart since 1995. “The reps that work on the road will still write business, but we can write more business when our customers can see the quality of the products.”

Vicki Taylor of Stepin Ahead said the timing is a bit cruel.

“It saddens me that the small businesses are not only affected by the COVID crisis but that the ease of internet business has caused many of our small companies to shut down,” Taylor wrote. “There does not seem to be adequate help for those of us who have been hard-working, dependable and sincere in operating a responsible business, and even less help to make that business successful or thriving. Assistance from banks and/or the government comes with heavy, thick strings attached and unreasonable expectations regarding loan repayment.”

For Jackson, the western wear merchandiser who opened her showroom just five months ago, it’s also a blow to the culture and aesthetic represented in this fading artifact of a soon-to-be bygone era.

“When I walk out of here for the last time, it’s going to feel like the end of something,” she said. “It’s a huge blow to the western culture we’re trying to preserve. Things are changing really fast, and people don’t realize just how soon things we used to take for granted will be gone.”

Ashley Jackson, owner of CowboyOutlets.com, in her showroom at the Denver Mart on Thursday. Jackson, her merchandise, as well as her displays and furniture and that of everybody else in the building, must be out by the end of the month. (Cuyler Meade photos)