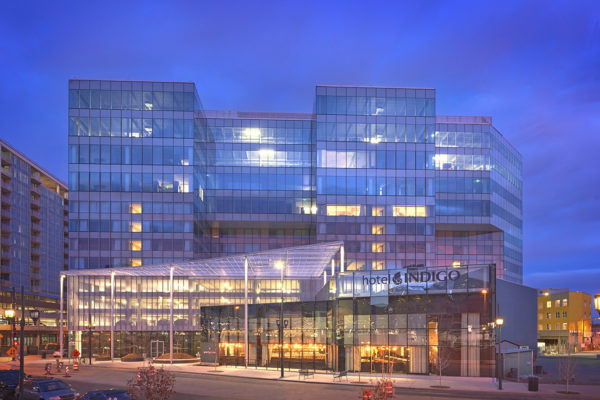 An exterior view of the Union Tower West building at 1801 Wewatta St. (Courtesy of McWhinney)

McWhinney has added to its hotel holdings with a $38.5 million deal by Union Station.

The company, which has offices in Denver and Loveland, last week purchased both the real estate and business operations of the 180-room Hotel Indigo Denver Downtown, which is in the Union Tower West building at 1801 Wewatta St.

The deal also included the building’s retail space, which has been occupied by restaurant Hearth & Dram. It has been closed in recent months due to the pandemic.

The hotel comprises about half of the 12-story Union Tower West building, completed in 2017. The upper floors of the building are office space.

The building’s developer, Atlanta-based Portman Holdings, sold the office space portion in late 2018 for $69 million. The company retained ownership of the hotel real estate until the sale to McWhinney.

The hotel is only a few years old, but McWhinney will make changes.

“We plan to renovate, rebrand and reopen the restaurant,” Dave Johnstone, McWhinney’s chief investment officer for hospitality, said in a statement. “We are making some aesthetic changes to the lobby, enhancing the public space art and reconfiguring portions of the lobby.”

The hotel is an IHG Hotels & Resorts property and is managed by Denver-based Sage Hospitality.

McWhinney has two other hotels nearby —  The Crawford Hotel at Denver Union Station and The Maven at Dary Block. The Indigo deal gives McWhinney 17 operating hotels in four states. Another is under development in Austin, Texas.

An exterior view of the Union Tower West building at 1801 Wewatta St. (Courtesy of McWhinney)