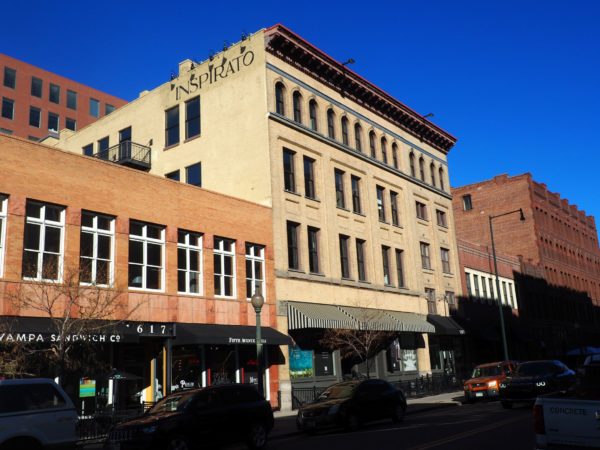 Inspirato’s lease of the four-story Peters Paper Building in the 1600 block of Wazee Street expires in February. (Thomas Gounley photo)

A soon-to-be-vacant office building in the 1600 block of Wazee Street has changed hands.

The property was sold by Some Place on Wazee LLC, which purchased it in September 2004, records show.

Brokers Sam Leger and Tim Finholm of Unique Properties represented the seller, whom they described as a local investment group.

Leger said Denver-based Inspirato has a lease for the entire building that is set to expire in February. The travel company, which has another office a block away, has communicated it will be moving out.

Inspirato has been in the building for more than a decade, at first taking just part of the space.

“They put Inspirato in the building back in 2008, 2009 and did extensive renovation work back then,” Leger said of the seller.

Prior to Inspirato, Il Fornaio operated a restaurant on the building’s first floor for about 25 years, Leger said.

Global Pacific is familiar with the downtown core. The company’s other holdings include the Spectrum office building at 1580 Lincoln St. and the Neusteters building and parking garage along Stout Street between 15th and 16th streets, according to the firm’s website.

As for the Paper Building, Global Pacific said it plans to focus on filling it back up — likely tapping JLL broker Jamie Roupp.

“With historic lease expirations occurring next year, there will be a great deal of indecision as tenants evaluate their near-term and long-term space needs,” Global Pacific Vice President Dave Lederhos said in a statement. “The Paper Building will be a great option for tenants who are targeting lower-rise buildings, term flexibility, and an irreplaceable location one block from Denver Union Station.”

Correction: The restaurant that previously operated in the building has been corrected.

Inspirato’s lease of the four-story Peters Paper Building in the 1600 block of Wazee Street expires in February. (Thomas Gounley photo)

The buyer, Global Pacific Properties, already owns other buildings downtown and recently made a purchase in RiNo.