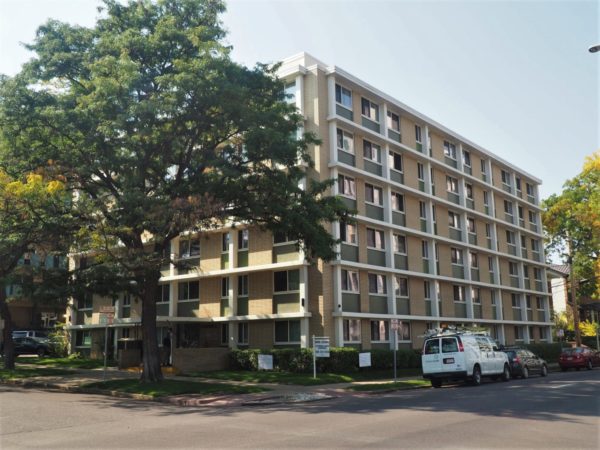 The owner of a six-story apartment building along Cheesman Park has withdrawn its request for a certificate of demolition eligibility.

The withdrawal by Botnick Realty for the building at 1295 Race St. came on Oct. 15, one day after three Denver residents told the city they planned to submit a landmark designation application for the structure.

Asked if the two events were related, Botnick Realty’s Steve Botnick said in an email: “We simply decided that it was premature to process it. As we had said earlier we were just exploring options so there was no urgency to the application.”

In the case of 1295 Race St., however, the withdrawal means that there will be no public fight over the structure’s future.

The 66-unit building, which sits at the northeast corner of Cheesman Park, dates to 1959 and is known as the Campbell-Stone Memorial Residences. It is operated as age- and income-restricted housing, catering to low-income seniors. Botnick Realty purchased the property in 2017 for $6.75 million, according to public records.

Botnick applied for the demolition eligibility certificate in September.

City staff determined the building has the potential for historic designation on multiple grounds. It was the first apartment building constructed in Denver under the Federal Housing Authority’s program dedicated to funding for apartments for the elderly, and is an example of International style, a subset of the Modernist style that became popular in Europe post-World War I, according to a city report.

Individuals had until Oct 15 to express interest in asking the city to make the building a landmark, a designation that would effectively prevent demolition. Kevin Kelly, Michael Henry and Gregory Sorenson did so on Oct. 14.

Travis Leiker, president of the Capitol Hill United Neighborhoods board, said the applicants believe the building has two important characteristics. First, there’s “the architectural interest that the building brings to the neighborhood,” he said. Secondly, “for years, this property has been a financially viable solution for those in search of affordable housing opportunities.”

“What we don’t want to see is the neighborhood lose both of those factors and qualities,” he said.

Henry said the trio had a Zoom call with Botnick Realty prior to the withdrawal, which he described as “very friendly.”

After the application was withdrawn, the trio proposed additional conversations with outside organizations. Leiker said the building is “sort of showing its age,” and he hopes rents can continue to be kept affordable in the future.

“While they are indicating they don’t have ‘future plans,’ we are going to keep a close eye on the property,” Leiker said.

The move came one day after three residents filed a notice indicating they planned to ask the city to designate the building a landmark.