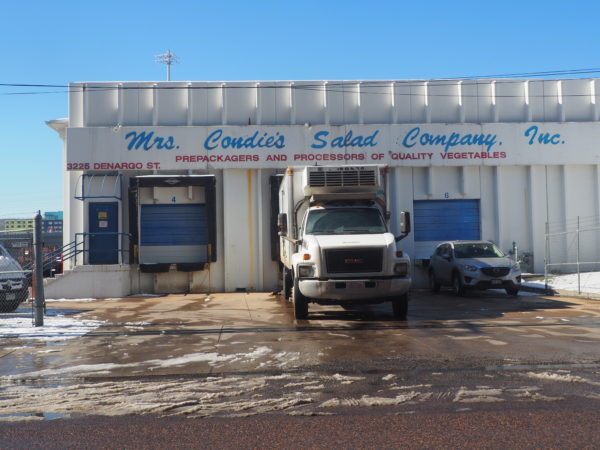 The property that would be rezoned is currently home to Mrs. Condi’s Salad Company. (Thomas Gounley)

Cypress Real Estate Advisors took a Denargo Market rezoning bid to the Denver City Council in May and saw it shot down.

Five months later, the Texas-based developer is hoping for a different outcome in round two.

This time around, as the company seeks to rezone an adjacent site, Cypress has agreed to incorporate a greater percentage of income-restricted units in its planned apartment complex, since the amount of so-called “affordable housing” was the primary reason its last bid was rejected. In return, Cypress wants to be able to build higher.

But on Tuesday, when Cypress’ latest request went before a council committee, Councilwoman Candi CdeBaca warned the changes may not be enough to ensure smooth sailing through the council approval process.

“There are no letters of opposition because people were under the impression they were negotiating,” she said. “If this goes forward to council, I fully expect there to be a lot more opposition that comes in.”

Cypress’ latest rezoning request is for 3225 Denargo St., a 1.49-acre site that’s currently home to Mrs. Condie’s Salad Co. — a food processing and packaging business. Cypress doesn’t currently own the site, but firms regularly request rezoning for properties they are under contract to purchase.

The company, along with the current owner, is asking the city to rezone the property from industrial use to C-MX-16, which allows for mixed-use development up to 16 stories. That’s because Cypress wants to build a 16-story, 326-unit apartment building with 5,800 square feet of ground-floor retail space.

Earlier this year, Cypress asked the city to rezone 3275 and 3315 Denargo St. — currently a single-story warehouse building and a self-storage facility — so it could build two 12-story buildings with a combined 650 apartments.

State law prevents municipalities such as Denver from requiring developers to incorporate income-restricted housing. But in its initial request, Cypress said it would voluntarily restrict 10 percent of the units in the planned buildings to those making up to 80 percent of the area median income.

But when it came time for the final council vote, six members were in favor of the rezoning. Seven voted against it, defeating it.

“I do not believe it is consistent with our planned goals, especially around equity and housing and health and safety and connectivity,” CdeBaca said at the time.

“I don’t have a problem with a developer trying to make a profit. That’s what a developer’s goal is in the course of doing business. But I have a problem where we keep taking this 10 percent number, like it comes from the sky, from God,” Councilman Paul Kashmann said at the time.

As part of the new request for the adjacent property, Cypress has agreed to make 15 percent, or 49, of the units income-restricted. Of those, 67 percent will be set aside for those making up to 80 percent of the area median income. The other third will be restricted to 60 percent AMI.

Chase Hill, a local Cypress executive, told the council’s Land Use, Transportation and Infrastructure Committee Tuesday that “we heard loud and clear” the message conveyed by the last rejection, and “we knew we had to do more here to get it done.”

CdeBaca noted that the company is looking to build four stories higher than it was for the adjacent site. Apartment buildings across the street are five and eight stories, she said.

“The only way to increase the amount and depth of the affordability and still have a viable project is to go for a higher rezoning,” Hill responded.

Three registered neighborhood organizations submitted statements of support for the rezoning, and no comments have been submitted in opposition, according to city staff. There are 11 organizations within 200 feet of the site.

Hill said Cypress has been in talks with one particular organization — the Globeville, Elyria-Swansea Coalition Organizing for Health and Housing Justice — in hopes of getting their support for the rezoning.

Hill said Cypress has agreed to donate $5,000 to the organization’s community defense fund, to make the income-restricted units available first to residents of the neighborhoods and to reduce the application fee and security deposit for them as well.

But the coalition wants 50 percent of the units in the building to be income-restricted, which Hill said is “not affordable without a significant government subsidy.”

“I feel we are very far apart on the affordable housing component,” he said of talks with the organization.

CdeBaca asked her colleagues on the committee to stall the building in committee, to see whether an agreement could be reached with the coalition.

“I understand why the community is advocating for deeper affordability,” she said.

The rest of the committee, however, voted to send the rezoning request to be considered by the full council. A vote is tentatively scheduled for mid-December.

The property that would be rezoned is currently home to Mrs. Condi’s Salad Company. (Thomas Gounley)