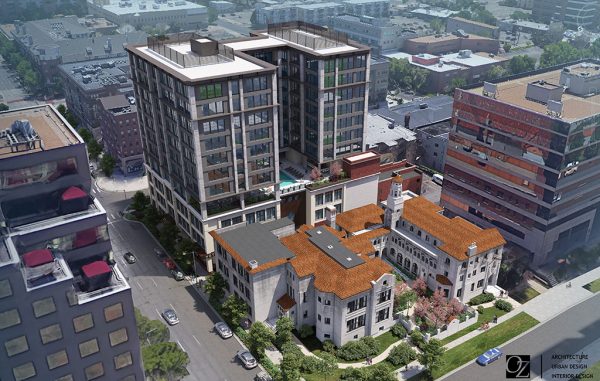 An artist’s rendering of the proposed Ace Hotel on the corner of 19th Avenue and Logan Street. (OZ Architecture)

The Denver City Council on Tuesday unanimously approved up to $14.25 million in tax increment financing for a planned development in Uptown.

New York-based GFI Development Co. wants to renovate the former Cathedral High School and adjacent Sisters of Charity convent in the 1800 block of Grant Street, and a former gymnasium building that faces Logan Street, as part of a hotel project at the site.

The bulk of the hotel rooms, along with about 35,000 square feet of office space, would be contained in an 11-story structure planned for the southwest corner of 19th Avenue and Logan Street, currently a parking lot. 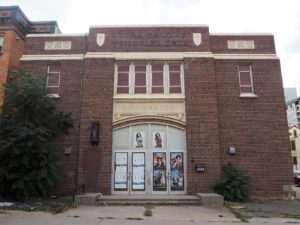 The development proposal submitted to the city indicates the project would be an Ace Hotel.

Tax increment financing means GFI will be reimbursed up to the $14.25 million figure when the project generates sales tax revenue and increased property tax revenue. Only costs associated with the adaptive-reuse component of the project — in other words, not the new 11-story building — are eligible for reimbursement.

The council approved the measure without much discussion on Tuesday, although Councilman Chris Hinds — who lives a block from the site, and used to work in the building next door — asked his colleagues for their support in the vote.

He said the former high school and convent were “definitely a dilapidated building.”

“I haven’t had this much confidence in a vote in the year I’ve been on council, because I have known this property since I originally started working in Uptown in April of 2007 and moved here to live in November of 2008,” he said. 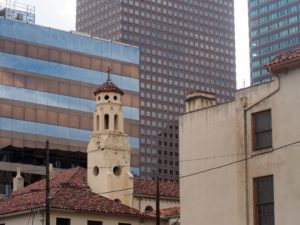 A steeple of the former Catholic school campus, with downtown office buildings in the background. (Thomas Gounley photo)

The financing proposal was proposed by the Denver Urban Renewal Authority, which tries to spur redevelopment in areas in need of revitalization.

Jeff Bader, redevelopment specialist with DURA, previously said the buildings have been vacant since 2014. GFI purchased the property in late 2016 for $6.86 million.

GFI Managing Director Stan Spiegelman told the council Tuesday that the firm often does projects that involve renovating historic structures. One example is The Beekman hotel in New York City.

“It married a historic building completed in 1883 with a new tower that was behind it,” he said. “And we did it in a way that allowed us to create an experience between the two.”

While Spiegelman did not give a timeline for beginning the project, DURA executive director Tracy Huggins previously said the now-approved agreement mandates it break ground by the end of 2021.

An artist’s rendering of the proposed Ace Hotel on the corner of 19th Avenue and Logan Street. (OZ Architecture)

The agreement mandates that the redevelopment project, which would include an 11-story structure, break ground by the end of next year.