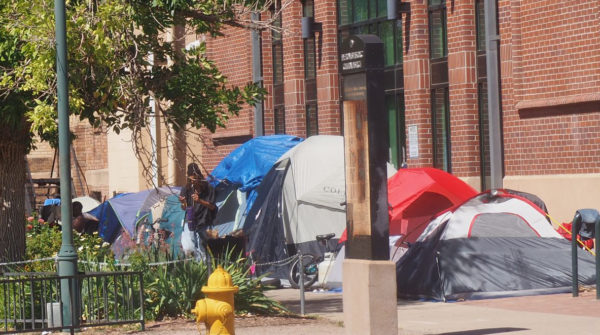 A site along Welton Street in Five Points is no longer being considered for a city-sanctioned homeless campsite, Denver Mayor Michael Hancock said on his Facebook page Tuesday evening.

The post came just three days after Hancock announced, also on Facebook, that a strip of city-owned property between Sonny Lawson Park and the Blair-Caldwell African American Research Library at 2401 Welton St. was being considered.

“After further investigation into suitability, we are taking this option off the table,” Hancock wrote. “There are potentially better sites, with fewer legal and practical obstacles. Therefore, the virtual town halls that have been scheduled for this week will be postponed and we will look to schedule a citywide conversation.”

Hancock didn’t specifically state why the city or nonprofit partner Colorado Village Collaborate, which would manage the campsite, determined the site was unsuitable.

A spokeswoman for the mayor didn’t respond to a request for comment Tuesday evening. Nor did the director of the nonprofit.

Eight City Council members signed a letter in April calling for “safe outdoor spaces” where individuals could camp during the coronavirus pandemic. Hancock resisted the idea, but in July asked the eight to recommend potential sites within their own districts.

Hancock has said there could ultimately be up to three such campsites in the city.

The parking lot of the Denver Coliseum was an early front-runner for a campsite, but that proposal was nixed after Councilwoman Candi CdeBaca, who represents the area, indicated she didn’t support that location.