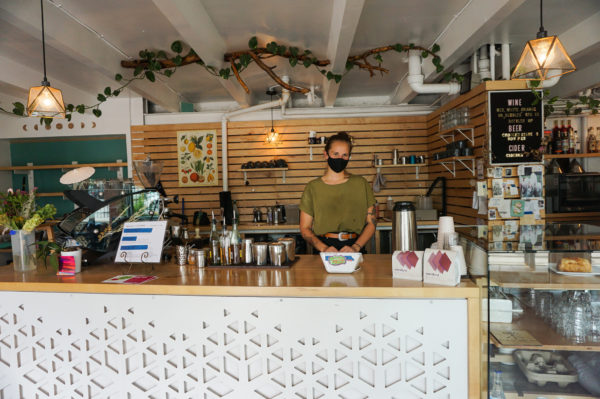 Elle Taylor doesn’t think customers should decide the worth of her baristas.

The owner of Amethyst Coffee eliminated tipping at her three locations and raised prices by 50 percent in May to pay her employees what she’s calling “a living wage.”

“We raised prices not to necessarily boost the business’s bottom line, but to be able to give all of our staff a raise and actually have them on salary. So they’re able to make a feasible amount of money to live in a city and have some sort of quality of life that isn’t paycheck to paycheck,” Taylor said.

Amethyst Coffee’s three operating locations are at 1111 Broadway in the Golden Triangle, in Berkeley at 4999 W. 44th Ave., and in Edgewater at food hall Edgewater Public Market. A fourth location, inside the event space Realm at 3851 Steele St. in Clayton, remains closed in the wake of the pandemic. 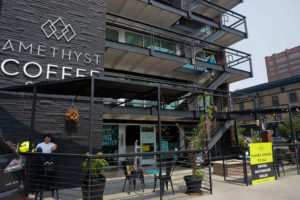 For comparison, the same 12 oz. black coffee runs about $2.20 before tax at local Starbucks locations. Aviano Coffee in Cherry Creek, which caters to a well-heeled crowd, charges $4.

Since reopening the three locations in May, Taylor has whittled her workforce down to six employees — including herself and business partner Breezy Sanchez. Each employee is paid a salary of $50,000 a year, she said.

“When someone asks why their coffee is $5, I explain it’s because I have to pay my rent, and I get responses like, ‘Do you really think your coffee is that good?’,” Taylor said. “And while I do, I go on to say that my employees need a decent quality of life. People get really offended and say, ‘Well, I wasn’t saying you don’t deserve that,’ but that’s essentially what they’re suggesting.”

Amethyst opened its inaugural Broadway location in 2015. Taylor said the pandemic seemed like a natural time to eliminate tipping.

“The pandemic has impacted the whole hospitality industry, so I think there’s a bit of a spotlight on us now, and people are a little more aware of the problems we’ve struggled with in the past,” Taylor said. “We’ve been wanting to do this for a while. But if we tried this three years ago, no one would understand. Now, the conversation feels more approachable. But we’ve had a handful of people who refuse to pay and leave, which I totally understand.”

When the pandemic arrived, Taylor and Sanchez closed entirely for 58 days. They could have stayed open for takeout but didn’t feel it was appropriate to ask staff to work. The business fell behind on rent, which Taylor said is $4,000 monthly for the Broadway location.

“We received no rent forgiveness from any of our landlords, and there was one day I paid $18,000 in backlogged taxes to the government,” Taylor said. “And we’re still $15,000 in debt to one landlord because of three months of no rent, so we’re chipping away at that.”

Taylor said the business has just recently started breaking even for the first time post-pandemic.

Customers have accused the cafe of “price gouging,” she said, but they’ve also received a lot of support, especially from their younger customers. The entire staff, which she called “an opinionated bunch,” made the group decision to eliminate tips before reopening. And while they’ve had tough conversations with customers, Taylor said she would rather close the business than revert to the old business model.

“Conceptually, we want to take away the idea that tipping is a good thing for society. So if we just added 20 percent gratuity to our prices that would counteract that,” Taylor said. “We want to show people that the price is the value of both the coffee and our staff’s hard work.”

Taylor, who has three non-white employees on staff, also eliminated tipping because she believes the system is rooted in racism. Tipping wasn’t popular in America until it took off following the Civil War, as it was used to underpay emancipated slaves, she said. A notorious example was the Pullman Company, according to Politico.

“Hospitality businesses were built on the idea that you don’t have to pay your workers. And since that’s always been the model, no one can ever afford anything,” Taylor said. “None of the workers are ever compensated properly, so all of the business models are flawed.”

Method Collective, which roasts its own coffee at 2011 W. 32nd Ave. in the Highlands, opted out of tips at the end of June, owner Alex Rawal said. The coffee shop, which is about to open a second location in Boulder, raised prices by 15 percent. Rawal increased his five employees’ hourly wages and offered them a percentage of their daily sales in lieu of tips.

“Amethyst moved the goal post and opened up this gap for coffee shops like us,” Rawal said. “We’ve been struggling with tipping for a long time and justifying our hourly rates. Six weeks ago, with everything and not having as many hours for employees, we finally decided to make a choice.”

There have been other efforts by America’s restaurant industry to break the reliance on tipping. Danny Meyer, of Union Square Hospitality Group in New York City, eliminated tipping at 12 restaurants in 2015.

Last month, however, Meyer reversed course citing the pandemic, saying he didn’t want to deny employees any extra compensation that might be available in a time of economic crisis.

“We don’t know how often people will be eating out. We don’t know what they are going to be willing to pay,” he told The New York Times. “We do know that guests want to tip generously right now.”

Editor’s Note: This story has been updated to reflect the current last name for Elle Taylor, who recently divorced.

This just reminded me why I make coffee at home. How is removing tips and increasing prices 50% fair to the customer? When I tip I consider 25% very generous. Why would generosity be forced on an Amethyst customer? A price should be set by two things 1) what the seller wants to charge and 2) what the customer is willing to pay… if the seller charges too much less customers will be willing to pay. What if my barista doesn’t deliver a top notch experience that would otherwise command a 25% tip (not to mention actually the forced 50%..). If they can succeed at offering extraordinarily non-competitive pricing without their demand falling off a cliff… good for them. But if higher prices leads to less demand and thus shrinking revenue, which would put any business at risk, isn’t everyone worse off and at risk of losing the job and getting no pay at all? I hope I’m wrong and that Amethyst has enough customers who aren’t there just to buy coffee but also to help the cause…….

I now realize that some micro-business owners are suicidally destroying their zombie business so they can blame the pandemic rather than their own idiocy when the business fails. When Denver metro unemployment is 10.9%, and both fears for infection along with a work at home transition occurring; intentional destruction of her business is the only explanation for raising prices.

I do hope this works out for them but raising your prices for the specific reason of paying your employees 50K per year may not fly. I don’t think working in a coffee shop is the best career choice, it’s more of a transitional job while going to school or pursuing an acting career. If Barista is your goal in life, well then good luck!

Great on. Elle Taylor!! Unemployment is 10.2 % nationally, worse then the Great Depression. Commenters seem to have ZERO qualms about paying $6-7 for a Starbucks latte. And lattes are steadily making inroads @ replacing coffee. Taylor, is EXACTLY correct in two quotes.

“Tipping wasn’t popular in America until it took off following the Civil War, as it was used to underpay emancipated slaves, she said. A notorious example was the Pullman Company, according to Politico.”
“Hospitality businesses were built on the idea that you don’t have to pay your workers. And since that’s always been the model, no one can ever afford anything,” Taylor said. “None of the workers are ever compensated properly, so all of the business models are flawed.”

The fundamental business model is beyond flawed. It’s COMPLETELY out of whack. Put simply, 1% control & own more than 1/2 of the wealth. To be a member of this little club you need to be clearing $515,000K a yr. And even that club are paupers compared to the 1/2 of the 1% who make $64 Million a yr. That club has a whopping 14 persons. With those numbers, 99% of humanity is screwed. The former play Monopoly, while the latter play Life.

I hope this is successful. Coffee’s important. Baristas invest a lot of time to become masters. They deserve to make a living wage.