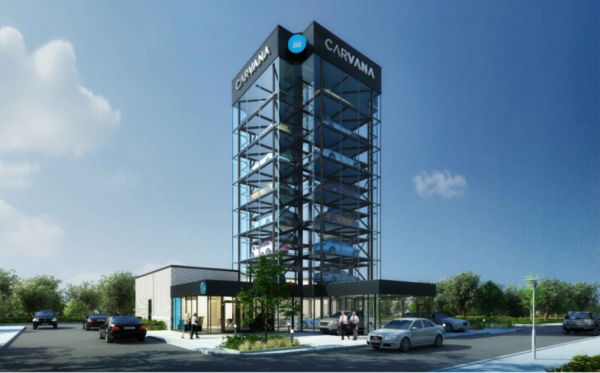 A rendering of the proposed building and ‘car vending machine.’ (Courtesy public records)

A used-car retailer is looking to bring one of its signature ‘car vending machines’ to Denver.

An early-stage development proposal was submitted to the city last week for a Carvana facility at 4700 E. Evans Ave., adjacent to Interstate 25.

The tower would top out at 75 feet, according to the plans. 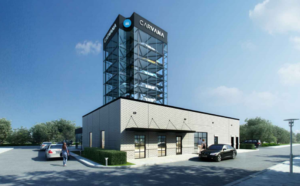 Another rendering of the proposed project. (Public records)

Tempe, Arizona-based Carvana was founded in 2012, and allows customers to purchase, finance and sell or trade in cars through the company’s website. Purchased vehicles are delivered to a customer’s home or picked up at one of the company’s vending machines.

Carvana has offered delivery to Denver-area customers since May 2018, according to a press release. But the closest Carvana vending machines are currently in Oklahoma City and Kansas City. The company has 24 around the country, according to its website.

Customers picking up a car from the vending machine are given a custom coin upon arrival which, when inserted, activates the delivery system and brings the desired vehicle to a delivery bay. To attract those wary of buying a used car sight unseen, Carvana allows returns within seven days.

Carvana declined to comment on the Denver development plans. The company went public in 2017, and has reported it sold 177,549 vehicles in 2019, making it the country’s third-largest used car dealer. It has yet to post a profit. Shares of CVNA have more than doubled since the start of this year.

The 1.54-acre Evans Avenue parcel on the east side of the interstate is undeveloped. It is owned by Greenbox IV LLC, which purchased it in February 2015 for $1.95 million, according to public records.

Carvana is listed as the developer on project plans. WHN Architects of Charlotte, North Carolina, is the project architect.

A rendering of the proposed building and ‘car vending machine.’ (Courtesy public records)

There are 24 of the used-car retailer’s glass towers dispensing vehicles around the country but this would be the first in Colorado.

Glad to see something possibly going in there. It’s been a pit ever since the Rockies Inn “mysteriously” burned down