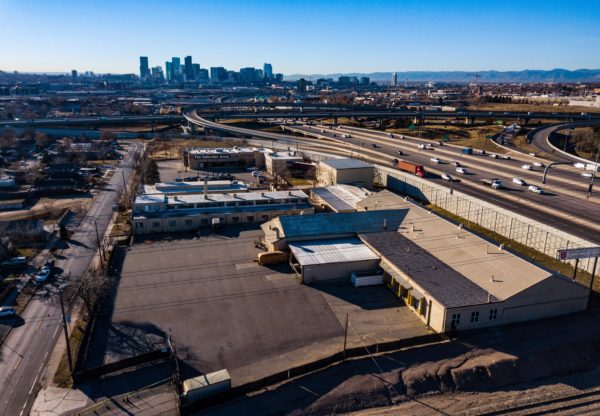 The property northeast of the merger of I-25 and I-70 sold for $6 million. (Courtesy Cushman & Wakefield)

Ken Wolf and Ari Stutz have landed in Globeville.

In 2018, the pair, early forces behind the transformation of RiNo, sold the bulk of their holdings in the neighborhood to Edens for more than $50 million. In January, they completed another huge transaction, selling an industrial site in Clayton to a Portland-based firm for $77 million, more than three times what they’d paid.

Now they’re on the opposite side of the deal.

Last week, Wolf and Stutz — acting as North of the Border LLC and Stutz Investments LLC — purchased 4751 Broadway in Denver’s Globeville neighborhood for $6 million, according to public records. Independent Bank provided financing for the deal.

The property, at the northeast corner of the merger of I-25 and I-70, was sold by the Salvation Army, which Stutz said had owned it since the 1970s.

The 4.7-acre lot — marketed as a development opportunity — has about 80,000 square feet of warehouse space on it, across multiple buildings, some of which are connected. Stutz said the Salvation Army is leasing back a “very small piece” of that for a short period. It’s otherwise vacant, although the pair have moved their offices to the property from a building they once owned in RiNo.

The future of the property? It’s still up in the air.

“We’re going to work through and figure out what it can be, and react to the market,” Stutz said.

In the short term, the goal is to lease the existing space to tenants, either industrial or creative office users.

“It’s a quiet little campus nestled in the Globeville neighborhood, which we think long term has a lot of potential,” Stutz said, noting the location makes it easy to quickly get around the city.

Stutz said the site is “relatively similar” to the site at 38th and Steele in Clayton that the pair just sold, although that property “has a lot more potential for office.”

“Hopefully in six months or a year we have a much better sense of what the future will look like,” he said.

The property northeast of the merger of I-25 and I-70 sold for $6 million. (Courtesy Cushman & Wakefield)

The developers sold a site in Clayton for $77 million earlier this year.