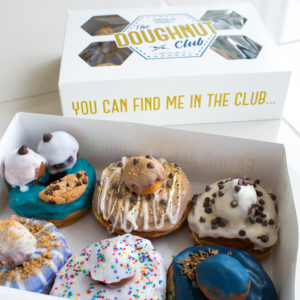 It’s difficult to glaze over this donut company.

Marquez Fernandez and his wife Ondrea pitched their company The Dough Bar on ABC’s “Shark Tank” in 2018, and followed that up with a brick-and-mortar location in Fort Collins. Then, last October, they filed for Chapter 11 bankruptcy. And now, they’re about to open their second gourmet donut shop in RiNo.

“We’re hoping to take Voodoo Doughnuts to the next level,” Fernandez said, name-dropping an Oregon-based competitor with locations in Denver.

The Fernandezes oversee two sister companies. The Dough Bar sells protein-packed baked donuts through its website. And The Doughnut Club is the name of their retail locations, which sell unique versions of the fried treats, along with some of The Dough Bar’s healthier alternatives.

The RiNo location of The Doughnut Club is set to open in Backyard on Blake, a retail complex at 3040 Blake St.

The original location is in Fort Collins, but it has been temporarily closed since the fall so the Fernandezes could focus on their online business, restructure some debt and prepare a new marketing plan for the website. The couple also had a pop-up shop in Broomfield for six months last year. 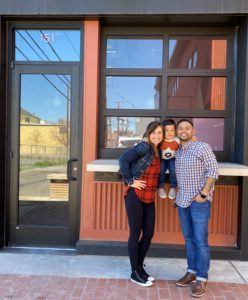 Owners Ondrea and Marquez Fernandez with their son Mason outside of their new retail shop.

Fernandez said the 400-square-foot shop in RiNo will open on June 5, which happens to be National Donut Day. The Fort Collins location also will reopen the same day.

“The Doughnut Club is more of an experience,” Fernandez said. “Instead of just picking a donut from a simple glass case, we have a cool gold frame decked out in lights with floating shelves that the donuts spin on. We want our customers to remember their time here.”

Since the store has such limited space, Fernandez said his team will make the donuts in Fort Collins every morning and drive them down to RiNo, just like the company did when it was operating in Broomfield. Some employees will come in at 1 a.m. to start the fried batches, he said.

The Fernandezes landed a $300,000 investment from Barbara Corcoran when they appeared on Shark Tank. Their bankruptcy filing came less than two years later. 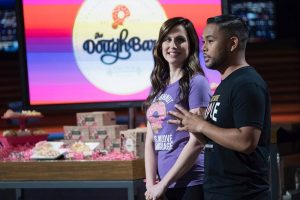 “We’re doing a lot of new things to boost our online business, like creating new products,” Fernandez said. “We just launched a protein cinnamon roll and are expanding our line into the gluten-free, keto and vegan market. In the process, we’ve developed a new identity as an online specialty bakery.”

Fernandez said the healthy donut company has doubled its sales since restructuring, and that online business has been steady throughout the pandemic. After their Shark Tank episode re-aired last week, The Dough Bar had one month’s worth of sales in a few hours, he said.

“We learned a lot from last year,” Fernandez said. “That was our first time opening a brick-and-mortar shop. But, now we have more experience, a better team and have been preparing for six to seven months for this grand opening in Denver.”

“We’re hoping to take Voodoo Doughnuts to the next level,” said Marquez Fernandez, co-owner of The Doughnut Club.