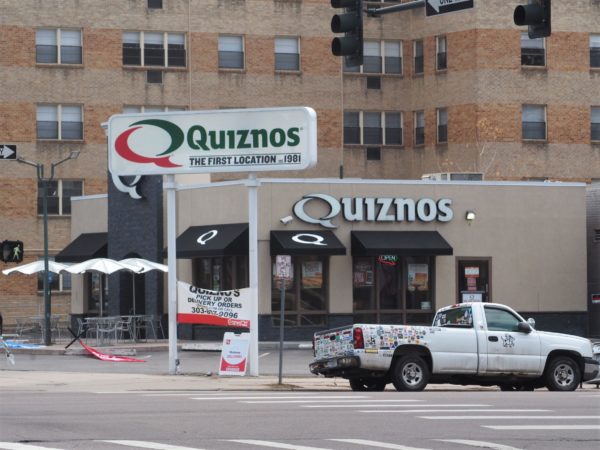 Adam Sinnard has been connected to Quiznos in some way for 20 years.

He got a job there as a college freshman, later moving into management. He worked for Quiznos corporate. And in 2016, he became a franchisee. He and husband Gavin Flynn own six locations.

And now, Adam Sinnard feels a sense of relief.

“Trust me, I was the last one who wanted to be the guy who let the first Quiznos close,” he said.

Last week, Sinnard and Flynn renewed their lease for 1275 Grant St., where the Denver-based chain has operated since it launched in 1981. Signage at the site denotes the honor.

The business’ lease was set to expire at the end of this month, and renewal was never a sure thing. Quiznos’ landlord Sidford Capital put the property on the market in January, and a company spokesman later said, “The economics of operating our Grant Street location has become unsustainable.”

On Monday, Sinnard said the main problem was property taxes. The value of the 1275 Grant St. lot jumped 160 percent, from $468,500 to $1.22 million, in its latest reassessment by the Denver Assessor’s Office.

As a result, annual property taxes increased from $10,511 to $25,510 annually. Like most retail tenants, Quiznos is responsible for paying the site’s property taxes.

“We were going back and forth (with the landlord) over the past 18 months, and we were trying to get an extension,” Sinnard said. “Then we got hit with the property tax bill and we had to walk.”

Sinnard said he was able to renew only because his landlord “came back with a very good deal,” essentially lowering rent to make up for the increase in property taxes.

“They’re the ones losing out here,” Sinnard said. “The city’s winning because they’re going to get their whole tax payment.”

Sinnard, who said his business also has been challenged by the city’s recent minimum wage hike, said the way he sees it, the city “wants a big high-rise built” on the site, because its value is based on its eight-story zoning.

“At the end of the day, they’re trying to push people out of Cap Hill, and out of Denver,” he said.

Quiznos peaked at about 5,000 locations in 2008, according to The Wall Street Journal. The company told BusinessDen in February that it has 409 locations in the U.S. and Canada, and approximately 200 elsewhere globally.

“The brand is definitely not what it used to be,” Sinnard said. “But we are from Denver. A lot of people forget that.”

The first Quiznos remains open for takeout and delivery amidst the coronavirus pandemic, but Sinnard said he’s doing about 30 percent of his normal business, because nearby office buildings have emptied out. It’s his hardest-hit location; he also owns restaurants in Brighton, Broomfield, Denver and Littleton.

“I’m the only crazy person signing a franchise lease extension in the midst of a pandemic,” Sinnard said. “We’re hoping that this location is going to be there for hopefully another 38 years.”

“Trust me, I was the last one who wanted to be the guy who let the first Quiznos close,” said Adam Sinnard.

Congratulations to Adam.
I remember opening that store back in 1981 as my first of many Quiznos. He is doing the brand proud and bringing back fond memories for me.
Keep up the good work.
God bless Quiznos.
Regards,
Todd Disner
Founder of Quiznos
971 322.3686