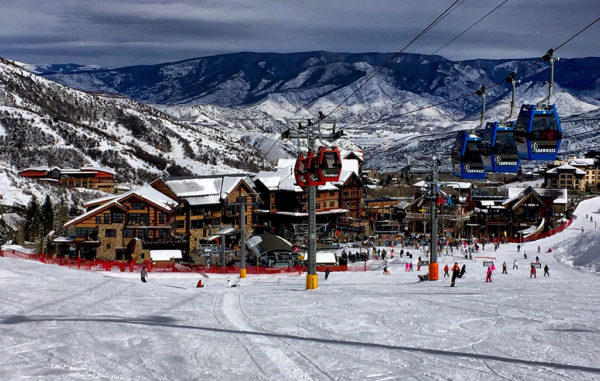 Alterra closed all its resorts on March 14 including Snowmass, pictured above. (BizDen file)

A California skier miffed at his shortened ski season has sued Denver-based Alterra, claiming that he and thousands of other pass holders are entitled to some sort of refund.

Villa Park resident Robert Kramer, a regular at Mammoth Mountain in California, sued Alterra in federal court in Denver this week seeking class-action status, alleging that the ski season he paid for was supposed to last months longer.

Alterra, which owns 15 resorts, closed all its mountains on March 14 as a result of the coronavirus pandemic. The lawsuit claims that the season goes as long as May at resorts such as Winter Park, and into June or July at Mammoth Mountain in California.

“Defendants did not offer a refund (or even partial refund) on passes,” the lawsuit said. “Defendants kept all of skiers’ money. With hundreds of thousands of pass holders, this amounts to tens of millions (or more) in unjust profits.”

Alterra has said in previous news reports that it sells more than 250,000 Ikon passes annually priced at between $650 and $1,000 per pass. The company said it does not comment on pending litigation.

Other companies faced with an abrupt closure have tried different tacks. Some local gyms, such as yoga chain CorePower, refunded customers who paid their monthly dues and then weren’t able to access gyms because of the shut-down orders. Other gyms kept members’ dues with no refunds. And then got sued.

Alterra this week started marketing pass renewals with a discount of $200 on $1,000 Ikon passes and $100 on $700 passes if purchased by the end of May. That’s double the renewal discount last season. In a press release the company said the price cut was a gesture of “gratitude” to customers.

Kramer is attempting to form a class for a class-action lawsuit that includes all pass holders.

“The core benefits of the Ikon Pass and Base Pass were substantially the same; unlimited access to Ikon resorts, with limited additional ski days at other destinations … Both groups seek the same type of relief: compensation for the early termination of pass benefits,” the lawsuit reads.

The case was filed by Gregory Dovel from the firm Dovel & Luner.

Alterra closed all its resorts on March 14 including Snowmass, pictured above. (BizDen file)

I also will be interested in joining any action to encourage Alterra to treat this situation more fairly.
I bought an unused IKON PASS with the intent of using it heavily this Spring with 3-day trips booked to ASPEN and STEAMBOAT well as day trips to Copper Mountain and Winter Park. To be fair, Alterra should offer refunds for unused passes or at least a credit towards next year’s season pass. We all had a contract with Alterra for them to provide specific services. Alterra failed to provide the agreed-upon services. Fair compensation needs to be provided for their breach of contract. Other venues such as sporting events and concerts that had to cancel events have given refunds. Alterra should be fair and do the same.
Please keep me in the loop as this progresses. Thanks

Didn’t they furlough the majority of their workers without pay at the beginning of the month?

how do we join the class action suit?

We sent a very polite and detailed email at the end of March that detailed our loss and the request for a fair and reasonable solution. Below was their response 3 weeks later after I followed up twice. It has only further upset us.

“We do sincerely empathize with your particular situation as the pandemic has impacted us all in various ways. Our policies, however, do remain intact, we are not offering refunds or partial compensation of the 19/20 season passes due to early closure

I am also up for being part of the class action lawsuit. Please let me know how to get involved.

My 2019/2020 IKON pass is also unused, and I got the exact same reply from them this morning. It has upset me as well.

If someone can let me know how I can be a part of the class-action lawsuit I would very much appreciate it. I have looked up the law firm’s website but it doesn’t talk about any active lawsuits that I could be a part of.

This is fully warranted. Most of the ikon customers would have understood if refunds couldn’t be given, but a 20-35% credit for next season could be used for next season. Instead they offer less than 10% in additional savings. Pathetic.

Unused 2019/2020 ikon pass and same email response from them after being told over the phone they are working on a solution. I understand it might not be feasible to give a full refund, but they could offer some customer service on the $700 product I purchased but could never use; instead their solution is business as usual, ignore all customers who purchased a service they never got to use and ask them to buy it again. Last year I renewed for $100 off in May too. They don’t even offer the discount passed May, and they know people are struggling financially right now. Also, they told me on the phone they are not sure if ski resorts will be fully operational next season due to COVID19 uncertainties!!! So it’s just another potential refund you won’t get back.

I just read this; “Jonas Jacobson, an attorney at Dovel & Luner, the law firm that filed the case against Alterra, said that while Colorado resorts were closed following an executive order from the governor, the resorts are still obligated to refund passholders. Jacobson said the next step in the legal process will be to ask the court to certify the class so the lawsuit can proceed as a class action. He said this could take months or up to a year.” I think we will just have to wait a while now,

I would be interested in joining the lawsuit as well – I have a partially used pass from the season and 2 cancelled trips!

How do I join this class action? Look to EPIC for decency and a good customer service. IKON has neither.

I would also be interested in joining in the law suit. Please keep me informed thank u

I would also like to join this law suit as I was going to look into doing this myself.

Have none of you heard of Force Majeure? This is ubiquitous in nearly all contracts in all industries. This is the same thing if there were no snow. if you did not buy insurance, you are out of luck. If you still want to ski, then skin up and walk up the mountain. Stop being so lazy and blaming everyone for your inconvenience.

I purchased two IKON passes, and the one for my fiance was unused at the time of the shutdown. We were both planning on using our passes heavily when the forecast for good snow became more confident. Keep in mind, that prior to mid-March the snow conditions (in California) were very sub-average. We drove up to Mammoth on the evening of March 12th with plans to stay until the end of the month. It was the next day that Alterra decided to close down all North American operations. Ironically, Alterra’s decision came within 20 minutes of Vail Corp’s decision to do the same.

While Alterra may have the right to suspend its operations due to force majeure, it does not have the right to dismiss its liabilities and obligations, and drop potentially hundreds of millions of dollars to its bottom line. Alterra has an obligation to its customers to refund them for the 2019/20 season pass revenue that it has unfairly recognized. Giving discounts for “next years” pass is NOT fair, and the refund should be given exclusive of any commitment by the 19/20 season pass holder to “re-up” his or her pass. It is my firm hope that Alterra does the right thing. No time like the present.