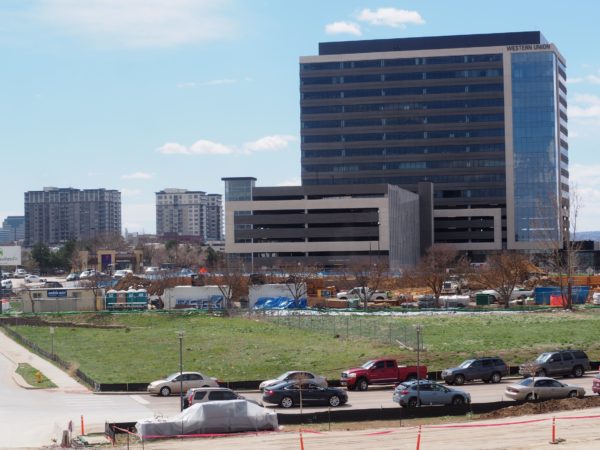 The headquarters is planned for the southwest corner of Quebec Street and Layton Avenue, the grassy area in this photo. (Thomas Gounley)

Vectra Bank is looking to build itself a new headquarters.

The Denver-based financial institution, which has 37 branches around the state, submitted a site-development plan to the city this month, proposing a nine-story office building within the master-planned Belleview Station area of the Denver Tech Center.

The plans call for about 99,500 square feet of office space on the building’s top four floors. Floor plates would be approximately 25,000 square feet.

“We’re planning on using the bulk of it,” Bruce Alexander, Vectra president and CEO, told BusinessDen. “We’re contemplating that we might lease out a floor in the early years until we grow into it.”

The structure would be built on a 0.95-acre parcel at the southwest corner of Quebec Street and Layton Avenue, across the street from the Belleview Station stop.

Across the street to the west, Denver-based Prime West is developing the 15-story 6900 Layton tower. Immediately to the south, hotelier Stonebridge has broken ground on an 18-story project that will incorporate both hotel rooms and office space.

Vectra has yet to purchase the land. For now, it’s still owned by Glendale-based Front Range Land and Development Co., the master planner of the 55-acre Belleview Station site northwest of the Interstate 25/Belleview Avenue interchange.

Alexander, who has led Vectra since 2000, said the bank plans to develop and own the project itself.

“As a financial institution, our cost of capital is lower than if we were to lend to a developer and have them build it,” he said, adding that the prospect of having space built exactly to its specifications also was appealing.

Alexander said the bank has been there about 15 years, and was one of the complex’s first tenants. Vectra leases about 50,000 square feet at the site, but the new headquarters also is expected to bring in staff working at other offices.

“The idea of bringing everyone together on one campus really appealed to us,” Alexander said.

He estimated it could be about three years before the project is completed.

In addition to four floors of office space, the proposed building would have an approximately 5,000-square-foot Vectra Bank branch on the ground floor, as well as about 5,300 square feet of additional retail space, according to the plans.

The second through fifth floors of the structure would be devoted to parking, with 367 spaces in all.

Vectra Bank is a division of Salt Lake City-based Zions Bancorporation, which operates different brand names in different markets. Alexander said about half of Vectra’s 37 branches are located along the Front Range.

As of last June, Zions/Vectra had $2.7 billion in Colorado deposits, giving it 1.92 percent of the state market share, according to FDIC data. About $1.5 billion of that was within the Denver metropolitan area, where the bank had 1.72 percent market share.

The headquarters is planned for the southwest corner of Quebec Street and Layton Avenue, the grassy area in this photo. (Thomas Gounley)

The financial institution’s current headquarters are by the I-25/Colorado Boulevard interchange.