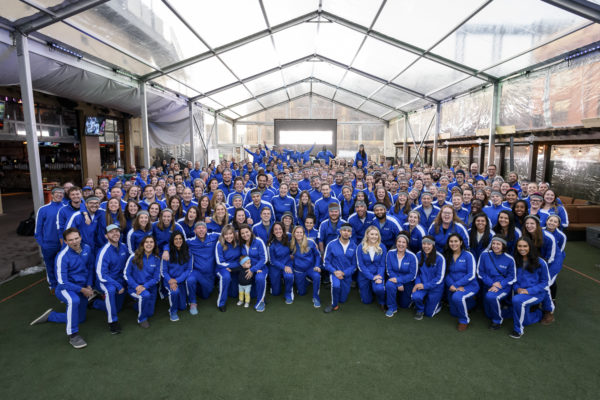 Denver-based Guild Education, which says it has about 550 employees, has pledged to not lay off any for the next 90 days. (Photos courtesy Guild Education)

One of Denver’s largest startups has pledged not to lay off any employees in the next three months.

Suzanne Stoller, chief people officer for Guild Education, told BusinessDen the company has 550 employees, almost all of them based in Denver.

“Part of this no-layoff pledge is about giving people a level of security,” she said.

The company’s pledge stands in contrast to other local startups that have shed staff in recent weeks, such as GoSpotCheck, Pana, Flytedesk and Inspirato.

“We feel very lucky,” Stoller said. “I don’t pretend that every company is in the same position we’re in.”

Stoller cited two factors that contributed to Guild Education’s ability to make the pledge. First, the company raised $157 million in a Series D round announced in November. The round valued the company at approximately $1 billion.

“It ended up being a great time to do that funding round … it certainly gave us a cushion,” she said. 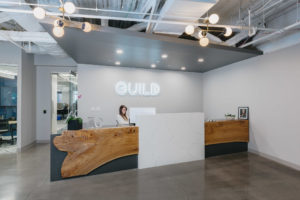 A photo of Guild Education’s office in Republic Plaza in downtown Denver.

Second, she said that Guild Education’s core business, which is working with large corporations on their employee education benefits, including connecting workers to nonprofit universities, feels “more relevant” in light of the coronavirus fallout.

Stoller said Guild Education, led by CEO Rachel Carlson, still is hiring for more than 100 positions, although the number of postings is fewer than the company had planned at the start of the year.

Guild Education has given all employees $300 to improve their work-from-home setup. And Stoller said the company in March reopened its enrollment period for health insurance plans, which became effective April 1. In light of the coronavirus, about 70 percent of employees who had initially picked a high-deductible plan used the opportunity to move to a plan with a lower deductible, she said.

Denver-based Guild Education, which says it has about 550 employees, has pledged to not lay off any for the next 90 days. (Photos courtesy Guild Education)

The Denver-based company’s pledge stands in contrast to other local startups that have shed staff in recent weeks.