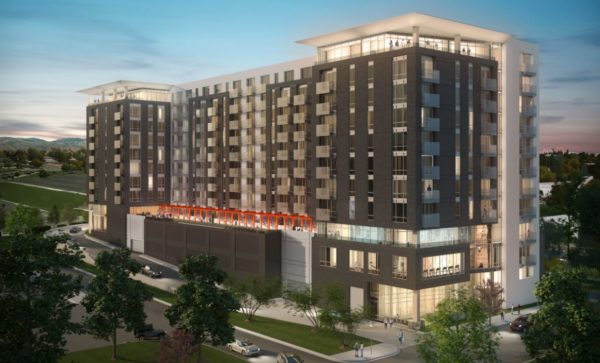 A rendering of the planned apartment complex. (Courtesy Opus Development)

The lot is currently a gravel parking lot, located between the football stadium and apartment building Turntable Studios.

Opus confirmed the purchase of the site, which it referred to with the address of 1919 Mile High Circle. 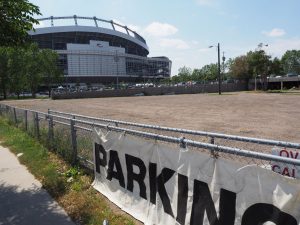 Joe Swensson, a Denver-based senior manager of real estate for the company, said Opus plans to develop a 12-story, 277-unit apartment complex on the site. The company plans to break ground April 1 and complete the project in the first quarter of 2022.

Opus Architects & Engineers will be the architect of record and Opus Design Build is the general contractor.

BusinessDen reported in September that the company had submitted development plans for the project to the city.

The lot by Mile High was sold by 19th and Clay LLC, an entity affiliated with Denver-based Nichols Partnership. Prior to the sale, the entity transferred a 66 percent stake in the property to MHVQ Holding LLC, an entity managed by Paul Lev-Ary, records show.

Records show Nichols paid $9 million in October 2014 for the lot and the Turntable Studios building, which at the time was a hotel. The firm then converted the hotel into micro units and sold that project in May 2017 for $31 million.

A rendering of the planned apartment complex. (Courtesy Opus Development)

An executive with Minnesota-based Opus Group proposed a 12-story, 277-unit complex at the site last year.