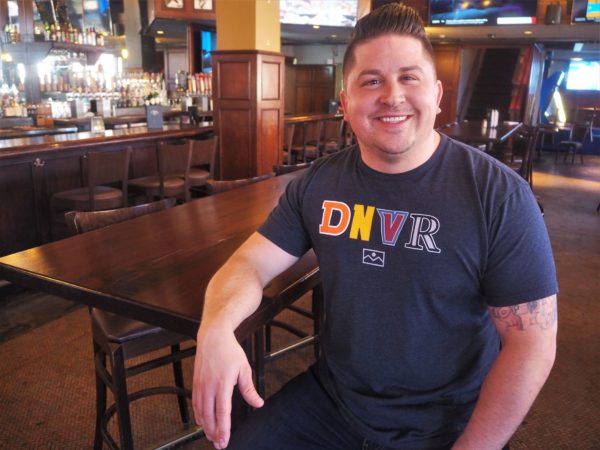 Brandon Spano founded sports news site DNVR in 2015. The business is moving into a bar on Colfax this week. (Photos by Thomas Gounley)

There’s no question that Brandon Spano knows how to attract people to a bar now and then.

DNVR, the Denver sports news site he founded under a different name in 2015, has held watch parties for key games in the last 1 1/2 years, peaking at around 300 attendees.

Come Friday, however, those watch parties will be held essentially every day, when Spano takes over a bar along Colfax, moves in his staff and tasks them with producing content on the city’s pro teams in front of patrons dining on wings and beer.

“We’ve shown the ability to pack bars for watch parties,” Spano said. “The biggest question here is how does that change when it’s every night?”

DNVR — each letter is pronounced individually — is moving into 2239 E. Colfax Ave., most recently known as Colfax Sports & Brew. The bar, which also will be called DNVR, opens at 5:30 p.m. Friday.

The bar is one of 22 in the area owned by Denver-based Little Pub Co. Spano described the arrangement as a licensing deal, in which Little Pub continues to operate the business but “they pay us to brand and inhabit the bar.”

“There are different levels of financial return based on the performance of the bar,” he said.

The licensing deal is for one year, but could be extended.

Mark Berzins, managing member of Little Pub, said he is a huge Colorado Avalanche fan and got hooked on DNVR about two years ago. He became friends with Spano, and the site hosted some watch parties at the company’s bars. 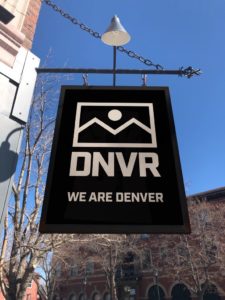 The bar, like the news site, will be called DNVR. (Brandon Spano)

Berzins said the deal grew out of a conversation the pair had about two months ago. Berzins marveled at the loyalty of DNVR subscribers, and said they’d probably be open to hanging with the site’s staff more often. Spano said it would be impractical to hold a watch party for every game.

“I said, maybe you guys need to bring the studio to the people,” Berzins said.

The deal moved quickly from there. Colfax Sports & Brew wasn’t a particularly established concept, having been rebranded in early 2019, after eight years as a soccer bar called Three Lions Pub. Berzins noted the building has a mezzanine level, which “wasn’t real functional.”

“That’s the upside of being an entrepreneur,” Berzins said. “You can kind of just wing it.”

The bar version of DNVR will be open to the public, although there will be special deals on the menu for the site’s subscribers, who pay $8.99 a month or $60 a year.

The main level of the restaurant won’t change drastically, although it’s being repainted, and a portion of the rear will stock DNVR merchandise for sale, as well as a lounge complete with a PlayStation set aside for subscribers. 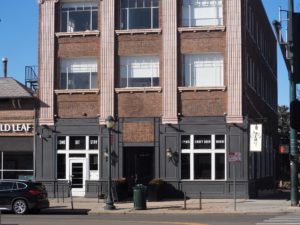 The bar at 2239 E. Colfax Ave. was most recently Colfax Sports & Brew, and before that Three Lions Pub.

The building’s mezzanine will see the biggest changes. Glass windows are being installed at the front, allowing the dining area below to see in. Four different sets for recording videos and podcasts are being configured. Desks will be installed.

The mezzanine will be the company’s main office, replacing 1,650 square feet DNVR has been leasing in Lakewood. Podcasts may be pumped out over the bar’s sound system as they’re recorded.

“Imagine after a game with 200 people in a packed bar, and then they go and do the post-game show in front of everyone,” Spano said.

Spano, 37, grew DNVR out of “The Brandon Spano Show,” which he hosted on Mile High Sports Radio from 2008 to 2015. He purchased the airtime, meaning he was responsible for finding advertisers. He later began buying inventory on other networks.

In 2015, as Mile High Sports was going off the air, Spano hired reporters for BSN Denver, a blog he had established. The name stood for Brandon Spano Network. The hires were fresh out of college or still enrolled. They began covering the city’s pro sports teams.

BSN started doing podcasts later that year. Spano brought on one of the company’s first writers, Ryan Koenigsberg, as a partner, and in June 2017 took out a SBA loan. He leased the office space in Lakewood and invested in mobile equipment. The site began producing new daily podcasts on each of the city’s primary four pro teams.

At the end of 2017, the company put up a hard paywall for its news stories, limiting access to subscribers. Everyone still can access the podcasts and videos.

In 2018, the company began holding watch parties and selling merchandise, notably T-shirts designed by Denver-based D-line Co. And last September, BSN Denver rebranded as DNVR, which is intended to mimic the call letters of a TV station.

“We wanted something that was more identifiable for our community, which didn’t sound like a corporate sports machine,” Spano said.

Spano said the site has 22 employees, 14 of whom are part of the newsroom. Multiple reporters cover each Denver pro team, and CU Boulder and Colorado State each have a dedicated reporter.

Compared to other media outlets, “our thing’s community-driven,” Spano said. He noted the company once hired a former Denver Post Avalanche reporter, but determined it wasn’t the right fit and replaced him with “a YouTuber that we found on Reddit.”

“All of our people can host a podcast, they can run Adobe,” Spano said. “They’re all digital savvy.”

Spano said the company is on track to do $1 million in revenue this year, and expects to end the year with at least 10,000 subscribers. About 50 percent of revenue comes from advertising, 30 percent from subscriptions and 20 percent from merchandise. The bar will add a new revenue source.

Spano said the company has raised $500,000 from investors. Half of that is coming from a round in the process of closing, which is led by Kim Carver, former Altitude Sports and Entertainment CEO, he said.

On the horizon? Bringing the business model to another city.

“If we can hit our goals this year, the plan is to scale this into market two,” Spano said.

Brandon Spano founded sports news site DNVR in 2015. The business is moving into a bar on Colfax this week. (Photos by Thomas Gounley)

Sports news site DNVR expects to do more than $1 million in revenue this year, and is closing an investment round led by a former Altitude Sports and Entertainment CEO.