It’s the highest-priced home sale in the Denver metro since 2008, according to the Denver Metro Association of Realtors. The association defines the metro area as 11 counties: Adams, Arapahoe, Boulder, Clear Creek, Denver, Douglas, Elbert, Gilpin, Jefferson, Park and Weld.

The property was purchased on Dec. 3 by Second Season LLC, which state records show was formed by Robert Kaufman, an attorney with Greenberg Traurig. Reached Thursday, Kaufman declined to comment.

Stats: This nearly 24,000-square-foot home has six bedrooms and 11 bathrooms in addition to a 10-car garage with a car wash.

The finer things: The Santa Barbara-style mansion was built in 1993 and is complete with mahogany woodwork, multiple patios and a two-story living room and library.

Each of its six bedrooms offers bathrooms en suite and private balconies. The master bedroom boasts floor-to-ceiling windows, fireplace, sitting area and five-piece bath. Its walk-out basement includes a 2,500-square-foot home gym, and six fireplaces are dispersed throughout the estate, according to previous BusinessDen reporting. 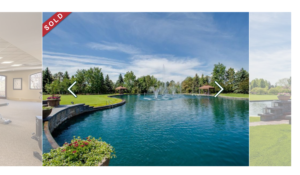 The outdoor space is equipped with gardens and ponds. (Screenshot)

The outdoor space is equipped with gardens and ponds offering an “atmosphere of outdoor activity and relaxation,” according to the listing.

Seller: Former Level 3 Communications CEO James Crowe and Pamela Crowe purchased the property in 1998 for $7.8 million, according to public records.

James Crowe served as CEO of the Broomfield-based telecommunications company from 1993 to 2013.

James Crowe, former Level 3 Communications CEO, has been trying to unload the property for years.