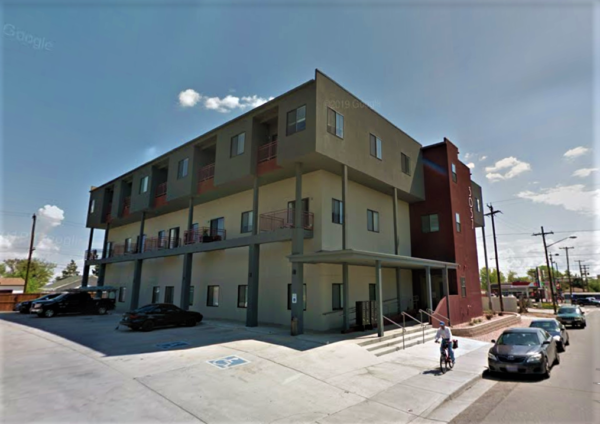 The lawsuit revolves around this apartment complex at 3057 W. Kentucky Ave. in Denver. (Google Maps)

A quasi-governmental organization that works to spur redevelopment of blighted areas in Denver has sued a former grant recipient.

The Denver Urban Renewal Authority filed a lawsuit against EJ Thompson and two entities he controls last week, accusing the developer of fraud and breach of contract.

Thompson did not respond to a request for comment relayed through an attorney.

According to the lawsuit, which was filed in Denver District Court, DURA and 3057 West Kentucky LLC entered into a redevelopment agreement in May 2014 for a property at 3057 W. Kentucky Ave. in Denver.

The lawsuit characterizes 3057 West Kentucky LLC as “a mere instrumentality and alter ego of Thompson,” since he owned and controlled the entity.

The agreement required that the building incorporate specific amenities, including a workout room, business center and heated lap pool, according to the lawsuit. It called for DURA to provide a certificate of completion when the improvements were made.

According to the lawsuit, the agreement also stated that if the property was sold within 10 years of DURA issuing the certificate of completion, the LLC would pay DURA 50 percent of any amount greater than $3 million.

The property was subsequently redeveloped. Then, in November 2016, 3057 West Kentucky LLC sold the complex — known as Enclave Apartments — for $4.9 million, according to public records.

DURA said in the lawsuit that it learned about the sale after it occurred. The agency had not yet issued the certificate of completion because the workout room and business center had not been completed, the lawsuit said.

DURA said that, in late 2016 and early 2017, it notified Thompson in writing that the project wasn’t considered complete, and requested half of the amount greater than $3 million.

The lawsuit alleges Thompson transferred the sale proceeds to himself and other LLCs he controls, and that 3057 West Kentucky LLC “represented to DURA that it is insolvent and ‘judgment proof’ on several occasions.”

DURA is led by Executive Director Tracy Huggins, who did not respond to a request for comment. The entity is overseen by a board comprised of 13 members, the majority of whom are appointed by the mayor of Denver.

Attorney Elizabeth Och of Hogan Lovells is representing DURA in the litigation.

The lawsuit revolves around this apartment complex at 3057 W. Kentucky Ave. in Denver. (Google Maps)

The quasi-governmental organization, established in 1958, works to spur redevelopment of blighted areas.